The COVID-19 pandemic is worsening the already difficult situation of older refugees across Latin America, according to a joint assessment published on Wednesday by the UN refugee agency, UNHCR, and the NGO HelpAge International.

The global crisis is damaging their well-being and access to vital rights and services, by heightening pre-existing threats to their physical and mental health, nutrition, finances and legal status.

Older people on the move are at heightened risk of exclusion as COVID-19 persists in the Americas. COVID-19 has affected their access to services and rights. https://t.co/FmJ1cV5Y77 pic.twitter.com/YEEozq5c3u

“Older persons in forced displacement have long encountered neglect and insufficient protection. Their full inclusion in national responses to the pandemic, including in COVID-19 vaccination plans, is key in order to safeguard their dignity and rights”, said Jose Samaniego, Director of UNHCR’s Regional Bureau for the Americas.

The study, titled A claim to dignity: Ageing on the Move, focuses on five countries: Colombia, Ecuador, El Salvador, Honduras and Peru.

Overall, 865 older persons took part via telephone, and consultations were also held with caretakers, service providers and other key personnel through interviews and online surveys.

Most of those interviewed reported limited access to healthcare. Forty-two percent were not receiving treatment for prior conditions, while six per cent of those infected with COVID-19 said they did not get adequate care.

Displaced older people have also seen a reduction in daily contact with their families, as well as limited community activities or opportunities for recreation, which has significantly aggravated feelings of loneliness and isolation.

Prior to the pandemic, one in four had to skip meals, and the crisis has caused 41 per cent to further reduce their food intake.

Agapito Escobar, 64, left his native Colombia two decades ago and found refuge in neighbouring Ecuador, where he lives with his wife, Wilma, who is 79.

“There are days when we only eat breakfast… and in the afternoon, we just drink a glass of water”, he told UNHCR.  The couple also relies on candlelight as their electricity was cut off due to lack of payment.

Meanwhile, 64 per cent of those surveyed had no monthly income before the pandemic. Of those who did, 62 per cent felt it was not enough to meet their basic needs.

Many more have seen their economic situation compounded, with one third of respondents in Honduras losing their jobs.  The figure was closer to half in the Andean region.

A dignity claim: Ageing on the move

Despite their increased vulnerability, many older persons said they still have to serve as breadwinners for their households, as well as caretakers for other family members.

The pandemic has also intensified the challenges these senior citizens face in obtaining documentation. Almost a quarter of the “older people on the move” in the Andean region have irregular status, rising to 32 per cent among those with disabilities.

“Aging and human mobility are global trends, whose intersectionality manifests itself in poverty and exclusion, while older people are treated as if they are invisible”, said Marcela Bustamante, HelpAge Regional Representative for Latin America and the Caribbean.

“Governments and the international community must do everything they can to enable older people on the move to live in dignity. Urgent change is needed.” 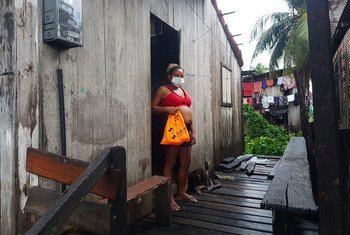 Although COVID-19 cases are declining in Brazil, the pandemic is putting decades of public health gains there at risk, the head of the World Health Organization (WHO) said on Friday.