Despite decreased instances in most regions, including the two worst-affected – the Americas and Europe – World Health Organization (WHO) Director-General Tedros Adhanom Ghebreyesus told journalists at a regular press briefing, “any decline is welcome, but we have been here before”.

“Over the past year, many countries have experienced a declining trend in cases and deaths, have relaxed public health and social measures too quickly, and individuals have let down their guard, only for those hard-won gains to be lost”, he warned.

In Southeast Asia however, COVID cases and deaths are increasing rapidly and there are countries in every region where the figures are ticking up, according to the WHO chief.

On behalf of the WHO Foundation, Tedros launched the “Together for India” appeal to help fund the UN agency’s work in the country, including the purchase of oxygen, personal protective equipment and medicines.

Noting the spread of variants, increased social mixing, the relaxation of public health and social measures, as well as inequitable levels of vaccination, he said: “Globally, we are still in a perilous situation”.

While vaccines are reducing severe disease and death in countries fortunate enough to have them in sufficient quantities, the “shocking” global disparity in access remains “one of the biggest risks to ending the pandemic”, underscored the WHO chief.

Despite early results suggesting that vaccines might also drive down transmission, he explained that while high and upper-middle income countries represent 53 per cent of the world’s population, they have received 83 per cent of its vaccines.

And by contrast, low and lower-middle income countries, which account for 47 per cent of the global population, have received just 17 per cent of the shots supplied by manufacturers so far.

“Redressing this global imbalance is an essential part of the solution”, that also requires a combination of public health measures.

“Vaccines prevent disease. But we can also prevent infection with public health tools that have been so effective in so many places”, said Tedros.

Words to the wise

Tedros advised leaders to use every tool at their disposal to “immediately drive transmission down” and if a country is seeing figures trend downward, to surge its capacity for keeping the pressure on.

“Even in countries with the highest vaccination rates, public health capacities must be strengthened to prepare for the possibility of vaccine-evading variants, and for future emergencies”, he said.

To individuals, the WHO chief reminded that every contact with someone outside their household presents a risk that varies according to type, duration and level of contact.

“The more contacts, the higher the risk”, he said.

Tedros said there would come a time when everyone will be able to unmask, meet up at close range and safely participate in concerts, sporting events and rallies, once their country has no transmission.

To get there, he urged all States to develop and implement “comprehensive and cohesive” national plans, based on the 10 pillars of WHO’s Strategic Preparedness and Response Plan.

“How quickly we end the pandemic, and how many sisters and brothers we lose along the way, depends on how quickly and how fairly we vaccinate a significant proportion of the global population, and how consistently we all follow proven public health measures”, he concluded. 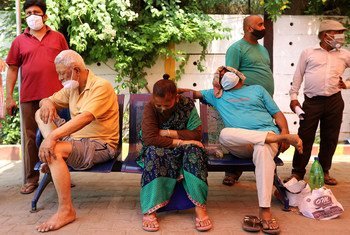 What can the UN do to support India through its deadly COVID-19 surge?

The UN is at the forefront of efforts to help India extricate itself from the almost unimaginable scale of suffering its citizens are undergoing, as a result of a devastating wave of COVID-19 infections. Earlier this week, UN News spoke to the country chiefs based in India, for the World Health Organization (WHO) and the UN Children’s Fund, to get their take on the crisis. Here are some key excerpts from the interviews. 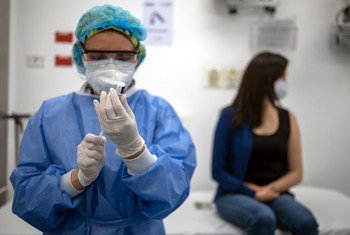 The head of the World Health Organization (WHO) on Wednesday said the commitment announced by the United States administration to lift vaccine patent protections to help boost global supply, was a “monumental moment” in the battle to end the deadly pandemic.