UNDP Lebanon
The UN Development Programme has been supporting reconstruction efforts including the installation of solar power panels.

On August 4th, 2020, a devastating blast in a warehouse destroyed much of the centre of the Lebanese capital, Beirut. Many neighbourhoods were destroyed, downtown Beirut looked like a war zone. Thousands were injured and some 200 people tragically lost their lives on that day and the days that followed. For many, their property and livelihoods were literally blown away.

Najat Rochdi the UN Resident and Humanitarian Coordinator for Lebanon spoke to UN News about how the country has coped over the last 12 months and what the future holds.

“I had only been in my new position of UN Resident and Humanitarian Coordinator for Lebanon for three days when the devastating explosions ripped through Beirut Port.

The effects of those explosions are still reverberating one year later. The country is striving to find a path to emerge from a tragedy that has touched every single person.

The destructive fallout of August 4th intensified suffering in Lebanon, which was already reeling from civil unrest, economic and financial hardship, increasing poverty, and unemployment, compounded by political deadlock and a soaring number of COVID-19 cases.

A year on from this tragedy, there is deepening hardship and mounting frustration. I met with many Lebanese people who gave voice and face to the deprivation and adversity that so many are experiencing in this country.

UN Lebanon/Nayla Hajjar
The UN's Najat Rochdi (centre) meets with women in Karantina, one of the neighbourhoods damaged by the port explosion.

People such as a 59-year-old homeless man called Youssef, whose dream is to have a roof above his head and a door that he can close when he sleeps and Cathy, who is 15, who has the simple desire to own a mobile phone so she can access online learning.

Or Mirna, a 50-year-old teacher who used to make her own living and provide for her family, but can now only afford one meal a day and is obliged to ask for help. She told me with tears in her eyes “They took my dignity”.

Situation ‘worsening by the day’

It is clear to me that the situation of ordinary people in Lebanon is worsening by the day. Currently, the UN estimates that more than one million Lebanese (out of a population of almost eight million, including more than two million refugees and migrants) need relief assistance to cover their basic needs, including access to food, health, education and water.

In addition, nine out of 10 refugees live in extreme poverty, an increase from 55 per cent from only a year before. Over half of the migrants in Lebanon say they were unable to meet their food needs, and the same number of migrants reported being unemployed (with the majority losing their jobs during the last quarter of 2020).

Lebanon, which not so long ago was a high middle-income country, is now facing probably the worst financial and economic crisis in its modern history; over half of its population is living in poverty. It is perhaps not surprising that many people have lost trust in their leaders and institutions.

Support for a brighter future

Despite the grim viewpoint, I believe, and so do many Lebanese, that the country has strong potential for a brighter future.

In the immediate aftermath of the explosions the United Nations and its partners reacted quickly and decisively to save lives and provide emergency assistance to those affected. $167 million was generously received for the United Nations coordinated flash appeal, one of the best funded appeals in 2020.

Support was provided to hospitals and health care centres for continuation of basic services, including in relation to COVID-19; damage to houses was assessed and emergency shelter kits distributed to ensure immediate safety and protection; water connections, including pumps and tanks, were re-established; hygiene and baby kits, in addition to in-kind food parcels, were distributed; protection services and psycho-social and mental health support services were provided; resources were allocated for debris clearance efforts.

On the recovery side, the UN, along with the European Union (EU) and the World Bank, and in consultation with relevant stakeholders, developed the Reform, Recovery and Reconstruction Framework. Known as 3RF, it is a people-centered programme, anchored in participation, inclusion and social justice.

It’s for the people and felt by them. It envisages a ground-breaking new way of working, which relies on partnerships, that bring together the presidency, government, parliament, civil society, private sector, and international partners, in addition to the EU, World Bank and UN to ensure the reconstruction of critical assets, services, and infrastructure for equal access to quality basic services, as well as the implementation of key reforms. Its forward-looking priorities, programmes and investments, include social inclusion and protection; housing and cultural heritage rehabilitation; municipal services and environment; and business recovery.

Already, thousands of people have received legal assistance to deal with claims arising from the explosions. Several public buildings have been retrofitted with green technologies, health facilities have received critical medical equipment. Several schools and medical facilities have been reconstructed or partially rehabilitated. In this way, Lebanon is beginning the long and arduous process of building back better.

© UNICEF
A UNICEF doctor treats a child just days after the explosion.

‘Emergency assistance is not the solution’

But also, Lebanon’s recovery must coincide with reform. Emergency assistance is not the solution.
It is regretful that Lebanon’s leaders have been unable to reach agreement on the formation of a new government in the past 10 months, which has delayed urgently needed structural reforms to address the country’s numerous challenges.

This is a critical moment in Lebanon’s history. The combined magnitude, depth and multi-dimensionality of the political, socio-economic and humanitarian crises facing Lebanon is unprecedented and presents an increasingly challenging landscape for the United Nations to implement its mandates.
But ultimately the responsibility for avoiding the total collapse of Lebanon lies primarily in the hands of its leaders.

UN/Pasqual Gorriz
Peacekeepers from the UN mission, UNIFIL, assess the magnitude of the blast that destroyed Beirut Port, Lebanon.

Unfortunately, a year on from my arrival in Lebanon and the explosions which rocked Beirut shortly thereafter, the situation continues to deteriorate. The UN is developing a 12-month Emergency Response Plan that articulates collective priority responses to the critical humanitarian needs of the most vulnerable Lebanese and migrants affected by the situation; it complements the support already provided to refugees and host communities.

This is not a solution. It aims at linking with and preparing the transition towards solutions to address the root causes of the crisis, which will only come from structural reforms and Government-led comprehensive and sustainable development interventions, including the implementation of a full-fledged comprehensive and inclusive Government-led social protection strategy.

I have been inspired by the spirit, solidarity, and courage of the young Lebanese people. The UN will continue to stand by Lebanon as it continues on the path to recovery and ultimately fulfilling its potential. That said, the greatest capital is the human capital and Lebanon can count on its women and men. Those who pledged not to leave the country despite the situation, those who use their creativity, their entrepreneurship and their commitment to build a better Lebanon. Those are the best hope for Lebanon”.

Read more here about the UN’s work in Lebanon 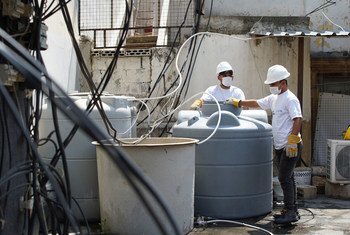 The public water system in Lebanon is “on life support” and could collapse at any moment, putting 71 per cent of the population, or more than four million people, at immediate risk of losing access to safe supply, the UN Children’s Fund, UNICEF, warned on Friday. 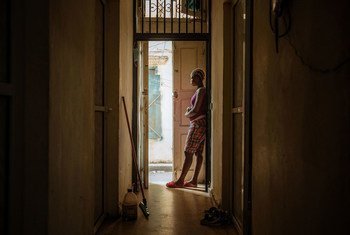 As Lebanon endures one of its worst financial and economic crises ever, the UN estimates that over the next eight months around $300 million is needed to provide vital aid to around 1.5 million Lebanese and 400,000 migrant workers living there.