IOM/Muse Mohammed
Many migrants in Lebanon have lost their jobs as domestic workers.

As Lebanon endures one of its worst financial and economic crises ever, the UN estimates that over the next eight months around $300 million is needed to provide vital aid to around 1.5 million Lebanese and 400,000 migrant workers living there.

“The explosion at the Beirut port has accelerated a lot of things, that's for sure”, said Deputy Special Coordinator Najat Rochdi, who is also UN Resident and Humanitarian Coordinator for Lebanon, speaking to reporters at the UN in Geneva, referring to the deadly blast last August that killed around 200 and devastated the city.

She said necessary political reforms had not been carried out “on time”, despite widespread warnings over the looming economic and financial crisis, that “a lot of analysts had already predicted…We're not talking about something that takes us by surprise today. I think everyone knew about it”.

Between April 2019 and April this year, the consumer Price Index has increased by more than 208 per cent and the price of food and beverages increased by 670 per cent. As a result, over half of the Lebanese population is now living in poverty.

“The crisis in the economy, the currency devaluation, as well as the governance vacuum has meant a breakdown of public services at a time when they are most needed”, said Ms. Rochdi. She added that "the pandemic has worsened a situation which was already fragile”.

The Deputy Special Coordinator said international confidence had been hit by the failure to form a functioning government, deterring investors, and exacerbating the failure of the banking system and other public institutions.

With support from UNDP, an increasing number of municipalities across Lebanon are today striving to professionalize their municipal police and strengthen their capacity to serve their communities.#MunicipalPolice #FromAndForthepeople@ukinlebanon @CanadaLebanon pic.twitter.com/secAGGVV7x

“The country is in the middle of a phase of hyperinflation, eroding the value of the national currency, people’s purchasing power and what remains of their trust in their leaders and institutions”, said Ms. Rochdi.

Healthcare on the brink

“The public health system is stretched beyond its limits from the double impact of the economic crisis and the COVID-19 outbreak. People are increasingly unable to access and afford health care amid growing shortages of important medicines and medical supplies”.

Alarming levels of poverty among refugees were evident in the latest UN survey: nine out of 10 Syrian refugees are falling below the extreme poverty line – a 60 % increase since 2019. Refugee protection is a growing issue with departures at sea on the rise and a considerable risk of refoulement.

“The crisis affects everyone in Lebanon, not just the Lebanese. As you know, Lebanon hosts the highest number of refugees per capita of residents in the world, with over one million Syrian refugees and more than 270 000 Palestine refugees”, said Ms. Rochdi.

The UN with the international community in collaboration with the Lebanese authorities is aiming for a rapid transition towards recovery efforts under the so-called “Reform, Recovery and Reconstruction Framework (3RF)”. This plan entails a focus on governance, social protection, social cohesion, inclusion and gender, health, education, and housing.

According to Ms. Rochdi, “the solutions are known, the list of priority reforms is very clearly articulated in the 3RF, in the 'Reform, Recovery and Reconstruction Framework', which was in all cases discussed with civil society, with local authorities, with national authorities, with the private sector, with the international community, so it's really a 'no brainer'. It is known, it is well known what must be done".

The international community has warned that without a government that implements meaningful structural reforms, no investments will be made beyond the necessary urgent humanitarian aid and early recovery efforts.

“The development of Lebanon is the responsibility of the Lebanese”, said the Resident Coordinator. “The development of Lebanon is not the responsibility of the international community. We always hope that at the internal level…whether at the level of political leadership, or other leadership, that there is indeed a decision to obviously put the interest of the country and the interest of the Lebanese as a priority”.

Ten months have passed since the resignation of the last Government in the wake of the Beirut port explosions on 4 August. Saad Hariri was designated as Prime Minister more than six months ago, tasked with forming a new administration, but so far without success. 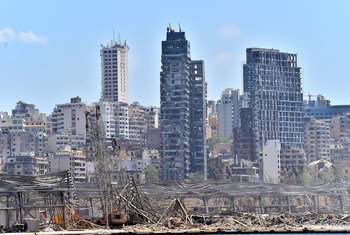 FROM THE FIELD: Port explosion which ‘burnt hearts’ of Beirut residents

Five months on from the devastating port explosion that killed over 200 people, and injured thousands more, the UN has invited Beirut residents to share their hopes and fears for the future of the city, and for Lebanon, which remains in crisis. 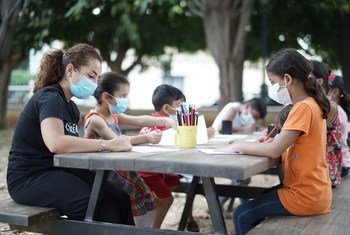