UNOCHA/Giles Clarke
A displaced man who fled his village now lives in a tent settlement on the outskirts of Marib in Yemen.

Seven years into a brutal conflict, Yemen is heavily dependent on humanitarian assistance, but the UN is intent on avoiding a repeat of the worst periods of famine and malnutrition its citizens have suffered. On a recent visit to UN headquarters in New York, David Gressly, the UN Resident and Humanitarian Coordinator for Yemen, told UN News that, although emergency funds have been received, the humanitarian response remains severely underfunded.

People are desperate to tell their stories

“I recently went up the west coast of Yemen, along a narrow strip of land between the frontlines, to try to reach households that haven't really been able to access humanitarian support. People in these areas were desperate to tell their story.

Usually it’s the mothers who want to tell you how they they're struggling to get access to schools for their children, access to water, to food, or to hospitals. It's a cry for help, a cry that we need to heed.

At one location, we saw a school that had been destroyed in a mortar attacks, and the area was contaminated by landmines, so crops weren't being harvested. Drinking water and medical assistance was on the other side of the frontline, and the people just felt totally squeezed from all sides. 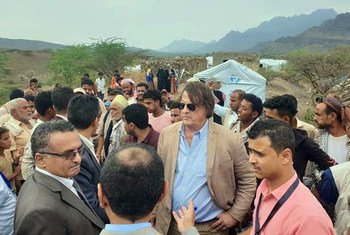 We hear these kinds of stories over and over again and, every two or three days, I read reports of another injury from a landmine or unexploded ordinance, and it’s usually a child.

We've fortunately been able to get enough funding coming in, particularly between April and June, to stop the march towards famine, but it's fragile and it needs to be sustained.

We've received approximately $2.1 billion so far, and last week we've seen additional pledges of approximately $600 million. So, it gets us a little bit closer, but we’re still short of the total requirements.

There are massive gaps in areas such as health, education, water, sanitation, protection support for the eradication of land mines and unexploded ordinance. All of those areas are around 80 to 85 per cent under funded.

We’ve been able to reach children at risk of malnutrition, but funding needs to continue through to the end of this year into 2022. And we need to start preparing for that push for more funding in the coming year.

The COVID-19 pandemic is complicating what is already a very difficult situation. I've been to many hospitals on the ground, and I've seen how crowded they are. Because clinics are no longer functioning outside the provincial capitals there’s a lack of space and the beds are full. Mothers have been turned away and told to go to another province.

So COVID-19 just adds to that burden on top of everything else, including the many other diseases that affect the Yemeni people.

© UNICEF/Saleh Hayyan
A one-and-a-half year-old girl is treated for malnutrition at a hospital in Yemen.

The UN can make a difference

There are three things we really need in Yemen right now. One is to sustain the humanitarian response and stop people from falling into famine or acute malnutrition.

The second is to take a step back and take a look why this humanitarian catastrophe exists. It's linked of course, to the war, but what the war did is destroy the economy and most jobs were lost, so people don't have the income to buy food.Even in the midst of a conflict, we need to have a more economic approach to compliment the humanitarian assistance, and find ways to unlock the economy and help businesses to open up where possible, and generate jobs and income so that families can buy their own food.

Eventually this will end. These things always do at some point. My biggest fear at this point in time is that this conflict will just go on and on. I've worked in other countries where this kind of situation has gone on for some 20 or 25 years, and that fundamentally transforms the country to the point where it can't go back to the social norms and development that existed before.

I took this job because I think there is real hope of making a difference, but now is the time to stop this conflict, before we lose a full generation of young people who will know nothing but war.” 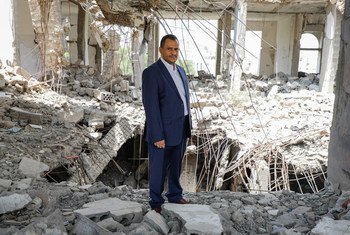 The Jeel Albena Association for Humanitarian Development, a Yemeni humanitarian organization that has supported tens of thousands of people caught up in the country’s conflict, is the winner of the 2021 UNHCR Nansen Refugee Award. 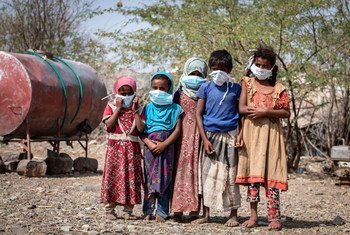 The Yemen conflict killed or maimed 2,600 children as hostilities intensified in 2019 and 2020; that’s according to a new report of the UN Secretary-General on Children and Armed conflict in the country.