© UNRWA/Mohamed Hinnawi
Much of Gaza City has been damaged as a result of Israeli air strikes.

The UN Security Council on Saturday made it’s first statement on the conflict that erupted between Israel and Palestinian armed groups in Gaza, calling for a “full adherence to the ceasefire” that brought 11 days of fighting to an end early on Friday morning.

In a Press Statement, the 15-member peace and security body welcomed the announcement of the ceasefire and gave recognition to the diplomatic mediation efforts played by Egypt, other nations in the region, the UN, the Middle East Quartet “and other international partners”.

In a Press Statement today, @UN Security Council members reiterated the importance of achieving a comprehensive peace based on the vision of a region where two democratic States, #Israel and #Palestine, live side by side in peace with secure and recognized borders. pic.twitter.com/Ob2LwHSapu

According to figures released by the UN humanitarian coordination office, OCHA, for the Occupied Palestinian Territory and verified by the UN human rights office (OHCHR), there were 242 Palestinians killed overall since 10 May; 23 girls, 43 boys, 38 women and 138 men.

At least 230 of the dead were seemingly killed by Israeli forces, although OCHA reported that some of the Palestinian casualties in Gaza may have resulted from rockets from their own side, falling short.

The Ministry of Health in Gaza, reported that 1,948 Palestinians had been injured, including 610 children, and nearly 400 women.

According to Israeli sources, OCHA reported that 12 Israelis had been killed by Palestinian rocket, or other fire – or when running for shelter during strikes; five men, five women, and two children; with around 710 injured.

In their statement, the members of the Security Council said they “mourned the loss of civilian lives, resulting from the violence.”

Ambassadors also stressed “the immediate need for humanitarian assistance to the Palestinian civilian population, particularly in Gaza”. On Friday, UN relief chief Mark Lowcock announced that $22.5 million was being allocated from emergency funds for the humanitarian response.

Among the civilian infrastructure impacted by Israeli bombardment were 53 schools damaged, along with 6 hospitals, 11 primary healthcare centres, and the central COVID-19 testing laboratory. More than 77,000 civilians in Gaza had to flee their homes to seek protection.

Five out of 10 power lines providing electricity from Israel were damaged, decreasing power across the enclave by around 45 per cent. A total of 258 buildings with homes and businesses were destroyed, and nearly 770 further homes are no longer inhabitable, said OCHA.

The Council statement offered support for Secretary General António Guterres’s call for the international community to work with the UN “on developing an integrated, robust package of support for a swift, sustainable reconstruction and recovery.”

“The members of the Security Council stressed the urgency of the restoration of calm in full and reiterated the importance of achieving a comprehensive peace based on the vision of a region where two democratic States, Israel and Palestine, live side by side in peace with secure and recognized borders.” 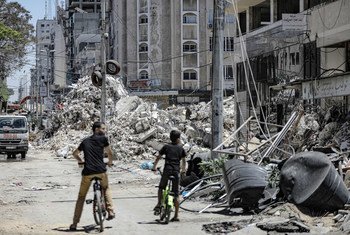 The humanitarian community has welcomed the ceasefire agreed in the Occupied Palestinian Territory and Israel but warned that the destruction in Gaza will take years, if not decades, to fix. 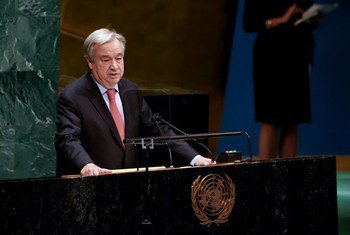