UNOCHA/Mohammad Lubbad
Destruction in Gaza following an Israeli strike in May 2021.

The past ten days have witnessed a “dangerous and horrific” surge in deadly violence in the Occupied Palestinian Territory (OPT), particularly Gaza, and in Israel, the UN chief told the General Assembly on Thursday.

“If there is a hell on earth, it is the lives of children in Gaza” ,Secretary-General António Guterres said, expressing deep shock at the continued air and artillery bombardment by the Israeli Defence Forces in Gaza that has so far claimed the lives of more than 200 Palestinians, including 60 children, and injured thousands more.

He also called “unacceptable”, the indiscriminate rocket fire towards Israel by Hamas – which controls the enclave - and other militant groups that has resulted in at least 12 deaths.

"I urge Israel to cease demolitions &amp; evictions in the Occupied Palestinian Territory, including East Jerusalem, in line with its obligations under international humanitarian and human rights law" - @antonioguterres pic.twitter.com/l1jmHHSxzu

Appealing to all parties to “cease hostilities”, the UN chief underscored: “The fighting must stop immediately”.

“The fighting has…forced over fifty thousand people to leave their homes and seek shelter in UNRWA (the UN relief agency for Palestine refugees) schools, mosques, and other places with little access to water, food, hygiene or health services”, lamented the top UN official.

He said he was “deeply distressed” by damage to UN facilities, upholding that “humanitarian installations” are “inviolable”, including during armed conflict.

Mr. Guterres said he was working on releasing cash from the Central Emergency Response Fund (CERF), and the UN’s relief chief intends to release $14 million from the Humanitarian Fund for the Occupied Palestinian Territories.

“Access for humanitarian goods is paramount. Attacks by militant groups on areas surrounding crossing points are unacceptable”, added the Secretary-General.

He also stressed that “rapid and unhindered access for humanitarian aid” must be allowed into Gaza.

Rules of war preserve “first and foremost” the protection of civilians, said Mr. Guterres, urging Israel to abide by those governing armed conflict and to “exercise maximum restraint” in its military operations.

He also appealed to Hamas and other militant groups to stop indiscriminately launching rockets into Israeli’s civilian population – a clear violation of international humanitarian law.

“There is no justification…for the abdication by the parties to the conflict of their obligations”, said the UN chief.

Concerned over violent clashes between Israeli security forces and Palestinians across the occupied West Bank, Mr Guterres urged Israel to “cease demolitions and evictions” in the OPT, including East Jerusalem.

“All settlement activities...are illegal under international law”, he reminded, and also stressed that the status quo at Holy Sites must be “upheld and respected”.

The UN chief warned that if the violence spreads beyond Israel and the OPT, it could create an environment “ripe for exploitation by radicals and extremists”, which should be prevented “at all costs”. 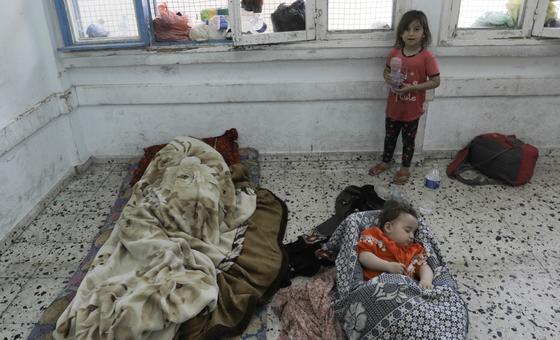 He told the Ambassadors that he and other UN officials are undertaking “extensive diplomatic efforts within the region” to encourage all sides to halt the violence.

Mr. Guterres called on the international community to do everything in its power to enable the parties to “step back from the brink” and on the parties themselves to allow mediation efforts to intensify to “bring the fighting to an end”.

Reminding that today’s “horrific events” must be viewed in the context of “decades of military occupation, political deadlock, grievances and hopelessness, and a failure to address the core issues at the heart of the conflict”, the UN chief called a revitalized peace process “the only route to a just and lasting solution”.

The Secretary-General encouraged the parties to replace “anger and disillusionment with hope for a future in which both Palestinians and Israelis live side by side, in peace and security”.

Step away from the brink: Assembly President

General Assembly President Volkan Bozkir echoed the calls for an immediate ceasefire in Gaza urging the parties to “step away from the brink”.

Noting that the “Question of Palestine” is the longest standing issue on the UN peace and security agenda, he said that the occupation, compounded by political impasse and lack of negotiations, is “the main underlying source of instability and perpetuation of the Israeli-Palestinian conflict”.

To move forward, he reminded that the UN’s institutional record prescribes a swift return to negotiations with the goal of ending the occupation; addressing all status issues, including that of Jerusalem; and achieving two independent, sovereign, viable States: “Israel and Palestine, living side-by-side in peace, security and mutual recognition”.

Mr. Bozkir called for the Security Council to speak with “a unified voice”.

“The Security Council must shoulder its responsibilities and overcome yet again its paralysis on the longest-standing item”, he spelled out, warning that its inaction hinders, the UN’s “ability and credibility” on other peace and security matters.

While commemorating the Organization's 75th anniversary, Member States had recommitted to upholding international peace and security.

“Yet when it comes to Israel and Palestine we are clearly failing”, said the Assembly President. “I call on both sides and the international community to take real steps to stop the vicious cycle of violence and to end the occupation. To defend human rights”. 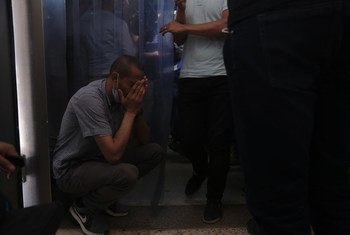 The UN health agency has added its weight to calls for regular humanitarian access to Gaza, where two dozen medical facilities have now come under attack through Israeli air strikes, along with healthcare personnel. 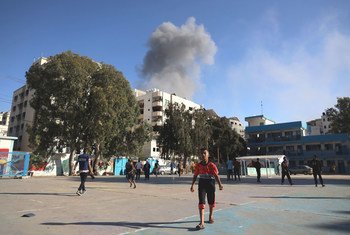 At least 60 youngsters have been killed in Gaza and another 444 have been injured in less than 10 days of conflict with Israel, the head of UN Children’s Fund has said, in a call for an immediate ceasefire and aid access to “stave off disaster”. On Wednesday, the UN relief agency for Palestine refugees (UNRWA) launched a flash appeal for $38 million, to deal with the spiralling humanitarian crisis.