Independent human rights experts appointed by the UN and the Organization of American States (OAS) have called for the Colombian Government to conduct a thorough and impartial investigation into the violent crackdown on recent peaceful protests in the country.

“We are deeply distressed by the excessive and unlawful use of force by police and members of the ESMAD (Mobile Anti-Riot Squad) against peaceful demonstrators, human rights defenders and journalists across Colombia”, they said on Friday.

The protests, which began on 28 April with a general strike over proposed tax reforms, continued despite an announcement by the Government on 2 May that the reform bill would be dropped.

The experts have received reports that include at least 26 killings, mostly of young people; more than 1,870 cases of police violence, some 168 disappearances, 963 alleged arbitrary detentions.

At least 12 cases of sexual violence, as well as allegations of torture, and nearly 70 assaults against human rights defenders also were reported.

They expressed concern about the military’s involvement in the Government response, and were alarmed by reported violent attacks against the indigenous Minga in the city of Cali.

“We reject any attempt of accusing indigenous peoples of participating with arms in the peaceful protests. Furthermore, we call on the authorities to take measures to prevent the spread of the stigmatization against protestors”, they said.

Regarding reports of a clampdown on the media, including censorship, internet restrictions, as well as attacks and harassment of journalists, they urged the authorities to “respect freedom of expression and the press, and ensure that journalists can cover the news in safety.”

The experts further stressed that the use of potentially lethal force is an extreme measure, and applicable only when strictly necessary to protect life or prevent serious injury from an imminent threat.

They called on the authorities to conduct “thorough, prompt, effective, impartial and independent investigations” into all alleged human rights violations, and to hold those responsible to account. They also urged the Government to disclose the whereabouts of all detained persons.

The experts said they have had recent engagement with the Government. They urged the authorities to respect the right to peaceful assembly during future protests and to ensure that force is used only in compliance with the principles of precaution, necessity and proportionality.

The 16 UN independent experts, who issued the statement alongside two OAS Special Rapporteurs, were appointed by the UN Human Rights Council in Geneva.

They serve in their individual capacity and are not UN staff, nor are they paid by the Organization. 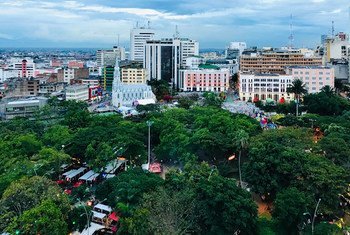 The United Nations human rights office (OHCHR) on Tuesday voiced deep alarm over the violence in the city of Cali in Colombia overnight, as a number of people were reportedly killed and wounded when police opened fire on demonstrators.