UN Colombia
A wide range of human rights activists have been targeted in Colombia, especially those living in rural areas.

“The single most targeted group was human rights defenders advocating on behalf of community-based and specific ethnic groups such as indigenous peoples and Afro-Colombians”, Marta Hurtado told reporters in Geneva, adding that the number of women human rights defenders killed increased “by almost 50 per cent in 2019 compared to 2018”.

According to OHCHR, 107 activists were killed last year.  And staff in the country are still in the process of verifying 13 additional cases reported during 2019 which, if confirmed, would raise the annual total to 120 killings.

“The single most targeted group was #humanrights defenders advocating on behalf of community-based and indigenous peoples and Afro-Colombians. The killings of female human rights defenders increased by almost 50% in 2019 compared to 2018,” --@UNHumanRights on #Colombia pic.twitter.com/fwC0YhBDuW

Attacks on human rights defenders during 2018 had already intensified, with 115 killings confirmed by the UN.

Vicious cycle of violence ‘must stop’

“This terrible trend is showing no let-up in 2020, with at least 10 human rights defenders already reportedly killed during the first 13 days of January”, Ms. Hurtado lamented.

The UN office renewed its call on the Government to “make a strenuous effort” to prevent attacks on those who are defending fundamental rights, investigate each case and prosecute those responsible, including those aiding and abetting the deadly attacks.

“The vicious and endemic cycle of violence and impunity must stop”, the spokesperson spelled out. “Victims and their families have a right to justice, truth and reparations”.

The vast majority of last year’s killings happened in rural areas, 98 per cent of which occurred in municipalities with black market economies, and where criminal groups or armed groups hold sway.

And around 86 per cent of the deaths took place in villages with a poverty rate above the national average.

Although more than half were recorded in the four provinces of Antioquia, Arauca, Cauca and Caquetá, 21 other provinces also saw fatalities.

While the figures reflect the gravity of the problem, Ms. Hurtado pointed out that “they conceal the structural causes that sustain violence against human rights defenders”.

“Any attack against human rights defenders is unacceptable and constitutes an assault against democracy, undermining participation and people’s access to their human rights”, she underscored.

There were a number of other contributing factors including the penetration of criminal groups and armed groups linked to illicit economies in areas vacated by FARC-EP rebels, and the favouring of a military response from the Government to control the violence.

In November 2016, the Secretary-General welcomed the signing of an historic UN-backed peace agreement between the Colombian Government and the FARC-EP group, ending an armed conflict that had been ongoing since 1964.

However, continuous challenges in implementing the peace agreement have also played a role in the violence, especially the dismantling of paramilitary linked-groups; the security situation in conflict-affected communities; land restitution, illicit crop substitution programmes and the fulfilment of victims’ rights.

While OHCHR has acknowledged some positive steps, such as a recent meeting of the National Commission on Security Guarantees convened by the Government early this month, to tackle this problem, the number of killings clearly shows much more needs to be done.

“We call on the authorities to redouble their efforts to ensure a free and secure environment for civic engagement and to increase the presence of civil State authorities in rural areas to provide basic services, such as health and education”, asserted Ms. Hurtado.

She concluded by stressing the need to urgently tackle disparities in the enjoyment of all rights, particularly economic, social and cultural rights – especially in rural areas, saying that “measures of a collective nature aimed at protecting geographical areas or communities must be further developed.” 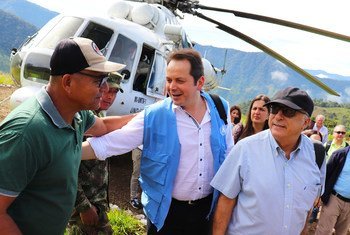 Colombia has continued to make “significant strides in its peace process”, the top UN envoy in the country told the Security Council on Monday. 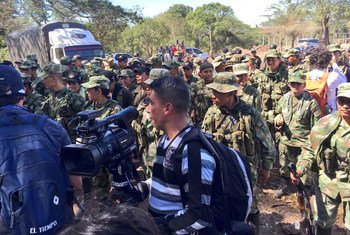