UN News/Nyi Teza
A scene of Yangon, the commercial hub of Myanmar.

🇲🇲 #Myanmar crisis was born of impunity. More violence against Myanmar’s people will only compound the illegitimacy of the coup, and the culpability of its leaders. Learn more 👉 https://t.co/OezLt9Po4S pic.twitter.com/reMtbkPSac

In a detailed account of the unfolding situation following the military takeover on 1 February, Special Rapporteur Andrews outlined the backdrop against which the civilian government was overthrown, the people’s response, and the “junta’s repressive actions”.

He started by stressing that the very act of convening the special session underscored the gravity with which the HRC viewed “what can aptly be described as an outrageous and illegal act – a coup d’état of a duly elected government and its duly elected leaders”.

“Day after day now, the people of Myanmar, and people around the world, have watched with horror at the photos and videos of brutality emerging from the streets of Myanmar – from large columns of security forces in full riot gear surrounding peaceful protesters and water cannons being fired into growing crowds, to protesters being shot, including a young woman shot in the head as she stood, unarmed and posing no threat, with other peaceful protesters in [the capital] Nay Pyi Taw.”

There are also reports of use of live ammunition and lethal force against demonstrators, increased arbitrary detentions and intimidation, threat to the media, and instituting of regulations and laws that systematically strip away rights, access to information and privacy.

Some 220 government officials and members of civil society, including State Counsellor Aung San Suu Kyi, President Win Myint, and members of the Union Election Commission, have been detained, many of whom were taken in “the dark of night and many times by plain-clothed police”, he added, citing reports.

Mr. Andrews called for action by the Human Rights Council (HRC), reading out a message he received from an activist in Myanmar, who is in hiding.

“He asked me to respectfully pass on these exact words to this body: ‘We need more than a statement on a piece paper; we need real action from the United Nations.’”

Mr. Andrews called on the HRC to urge the Security Council “to consider all of the options it has previously used to deal with gross human rights violations”, including sanctions, arms embargos, and travel bans, and calling for judicial action at the International Criminal Court (ICC) or ad hoc tribunals.

He asked me to respectfully pass on these exact words to this body: “We need more than a statement on a piece paper; we need real action from the United Nations.”
– Special Rapporteur Tom Andrews, reading a message from an activist

“All of these options should be on the table.”

Deputy High Commissioner al-Nashif went on to note that the current crisis in Myanmar was “born of impunity”, with long-standing lack of civilian control over the military and its disproportionate influence in the country’s political and economic institutions.

“For over 20 years, successive High Commissioners and many eminent experts have briefed this Council, and its predecessor, on violations committed by the country’s military, which include some of the most serious crimes alleged under international law”, she said, adding that “lack of action to address them has emboldened military leaders and contributed to this present crisis.”

She recalled the explicit warning by the HRC’s Fact Finding Mission in 2018, which said that “the Tatmadaw (Myanmar’s military) is the greatest impediment to Myanmar’s development as a modern democratic nation.

“The Commander-in-Chief of the Tatmadaw, Min Aung Hlaing, and all the current leadership must be replaced, and a complete restructuring must be undertaken to place the Tatmadaw under full civilian control. Myanmar’s democratic transition depends on it.”

Ms. al-Nashif urged the Human Rights Council (HRC) to make “the strongest possible call for the military authorities to respect the result of the election, to return power to civilian control and to immediately release all individuals arbitrarily detained.”

Ms. al-Nashif also voiced concerns for the members of the minority, mainly Muslim, Rohingya community who in the past have faced violent persecution by the military.

“The military authorities must not be allowed to exacerbate the situation of the Rohingya people, after the extreme violence and decades of discrimination that they have endured,” she said, underlining that Myanmar “must fully comply with the provisional measures ordered by the International Court of Justice, and move to genuinely address the root causes of conflicts in Rakhine state and other ethnic minority areas.”

In 2017, over 700,000 Rohingyas were forced to flee their homes and seek refuge across the border, in Bangladesh, following widespread attacks by Myanmar’s security forces, in retaliation for attacks on remote police outposts by armed groups alleged to belong to the community.

Also speaking at the opening of the special session, Myanmar’s Ambassador Myint Thu responded by underscoring his country’s commitment to democratic values, and justifying the military’s intervention as necessary.

“In light of the post-election irregularities and the following complex situation, Tatmadaw was compelled to take the State responsibilities in accordance with the State constitution”, he said.

He informed the HRC that on 1 February, the state of emergency was declared for one year and the legislative, executive and judicial powers of the State were transferred by Acting President to the Commander in Chief of the Defense Forces. A State Administrative Council subsequently formed on 2 February, with 16 members, including eight senior military officials and eight civilians he added.

🔴BREAKINGResolution adopted by consensus! The UN Human Rights Council deplores the removal of the elected government and calls for the release of Aung San Suu Kyi and other arbitrarily detained persons.ℹ️#SS29 INFO https://t.co/h2wOkbMu1D pic.twitter.com/qP049xovz9

Also on Friday, the UN Human Rights Council adopted a resolution calling for the restoration of the democratically elected Government in Myanmar, the immediate and unconditional release of all persons arbitrarily detained, and the lifting of the state of emergency.

In the resolution, entitled human rights implications of the crisis in Myanmar, the 47-member intergovernmental body “strongly deplored” the detentions and the suspension of mandates of members of all parliaments, and “strongly urged” the Myanmar security forces to exercise utmost restraint and to refrain from any use of violence against peaceful protesters, and to respect the right to peaceful assembly.

The HRC also called for the “immediate and permanent lifting of restrictions” on the Internet, telecommunication and social media, and the avoidance of any further violations of the rights to freedom of opinion and expression, including the freedom to seek, receive and impart information, in accordance with international human rights law.

The body also voiced concern at the continuing reports of serious human rights violations and abuses in Myanmar, including against Rohingya Muslims and other minorities. It also stressed the need to address the root causes of the crisis in Rakhine state and to create the conditions necessary for the safe, voluntary, sustainable and dignified return of displaced persons, including of Rohingya Muslims and other minorities.

The Council further requested the UN High Commissioner for Human Rights and the Special Rapporteur on the situation of human rights in Myanmar to assess the current human rights situation in the country, and to provide updates in their reports to the Human Rights Council, and called upon Myanmar authorities to engage and cooperate with UN human rights mechanisms 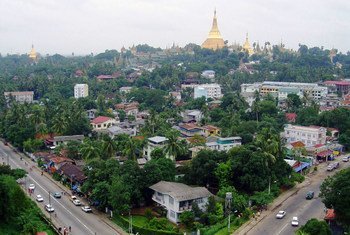 Only ‘following orders’, no defence for any Myanmar atrocities: UN expert

The UN Special Rapporteur on the situation of human rights in Myanmar on Wednesday said that security forces in the country must “stand down before there are more casualties” among protesters, amid reports of use of lethal force against those demonstrating against last week’s military takeover. 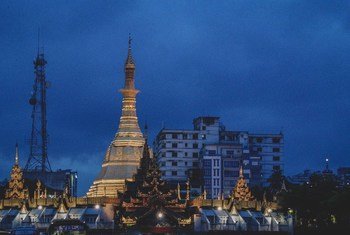 The United Nations in Myanmar has voiced strong concerns over Tuesday’s reported use of force by security forces against demonstrators protesting the military takeover and arrests of elected leaders and politicians.