UN Secretary-General António Guterres has called for restrain in Myanmar, amid reports of rising tensions over the outcome of last year’s general elections.

“The Secretary-General is following with great concern recent developments in Myanmar”, his spokesperson said in a statement on Thursday.

Tensions have been rising following the outcomes of the November 2020 general elections, in which Aung San Suu Kyi-led National League for Democracy (NLD) claimed an overwhelming victory.

According to media reports, other political parties disputed the results, alleging the polls were marred by irregularities. Media reports also said that earlier this week, a senior military official made a statement against the election results, which added to the tensions.

The new parliament is scheduled to convene on Monday.

In the statement, Mr. Guterres called on “all actors to desist from any form of incitement or provocation, demonstrate leadership, and to adhere to democratic norms and respecting the outcome of the 8 November general election.”

“All electoral disputes should be resolved through established legal mechanisms”, he added.

The Secretary-General also reaffirmed the support of the United Nations to the people and Government of Myanmar “in their pursuit of peace, inclusive sustainable development, humanitarian action, human rights and rule of law.” 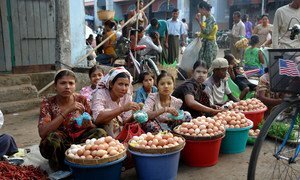