The head of the UN Mission in South Sudan (UNMISS), has appealed for the international community to remain focused on the country as it continues to make gains on the political and peacebuilding fronts.

Briefing a virtual meeting of the Security Council on Tuesday, UNMISS chief David Shearer highlighted achievements over the past year, including the successful formation of a transitional government in line with a 2018 peace agreement.

However, he reported that progress on unifying the security forces has stalled, and many other benchmarks are behind schedule.

Additionally, even though nine out of 10 state governors are now in place, dispute over the remaining official is being used to halt appointment of local commissioners, which could contribute to inter-communal violence.

“Momentum in South Sudan’s peace process is linked to the strength of international engagement. However, attention by Member States in the Horn is understandably directed elsewhere, contributing to the sense of drift that people are frequently remarking upon. Nevertheless, collectively, we still need to remain focused on South Sudan and guide the peace implementation”, he said.

Fears for the dry season

Mr. Shearer also warned that despite a recent drop in violence, the approaching dry season could see a resurgence in volatility among farmers and pastoralists.

“There’s acute food insecurity that’s affecting half of the population. It’s driven by displacement from conflict and severe flooding, which is affecting around a million people, with the loss of livestock and crops”, he said.

“There’s a worsening economic situation due to COVID-19, and that’s all on top of the persisting pervasive poverty.”

Humanitarians have recently reported that the spectre of famine looms over South Sudan, the world’s youngest nation.

“Millions of South Sudanese people have been pushed to breaking point”, he said.

As a result, people, especially women and girls, have adopted “harmful coping mechanisms”, such as forced early marriage or dropping out of school.

To meet the growing needs, the UN has provided nearly $40 million for South Sudan this year. Aid agencies and non-governmental organizations (NGOs) on the ground have also scaled-up response.

“But we need to do more”, said Mr. Lowcock. “We need more funding to ensure food and livelihoods, health services and other lifesaving programmes, are supported in the six counties I’ve talked about, but also across the entire country.”

The UN relief chief paid tribute to humanitarians in South Sudan, most of whom are nationals of the country.

Nine lost their lives this year: triple the number killed in 2019.

♦ Receive daily updates directly in your inbox - Subscribe here to a topic.
♦ Download the UN News app for your iOS or Android devices.
security council|South Sudan 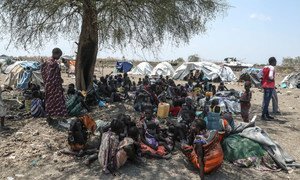 Over 1,000 people have been killed and more than 400 abducted in the past six months in intercommunal violence in South Sudan, amid fears that tensions may worsen with the onset of the dry season, the UN envoy for the country has said.