UN Photo/Tim McKulka
Kenyan troops serving with the UN Mission in Sudan (UNMIS) patrol the disputed area of Abyei, claimed by both Sudan and South Sudan.
24 October 2019
Peace and Security

The meeting was focused on the disputed, arid, oil-rich border territory of Abyei, where the UN Interim Security Force, UNISFA, has helped to monitor an uneasy peace without formal governance, and protect civilians, since 2011, in the weeks before South Sudan became independent from its northern neighbour.

Boundary lines for the ethnically-split rectangle of territory, have not been agreed between the two nations, but both sides agreed to allow UNISFA's neutral presence when inter-communal fighting erupted in 2011, to help foster a more secure environment, until final agreement can be reached.

The UN chief of Peace Operations, Jean-Pierre Lacroix, said there had been a “continued partnership” between the two, “notwithstanding the recent change of government in Khartoum”, following the overthrow of dictator Omar al-Bashir, presenting a “unique opportunity to move the political process forward on the border issues.”

South Sudanese President Salva Kiir and civilian Prime Minister of Sudan, Abdalla Hamdouk, had made reciprocal visits to their respective capitals in the past two months, while Juba in the south had also hosted peace talks between the Sudanese transitional authority and armed opposition groups since 14 October, said Mr. Lacroix.

“Both countries have never been closer to achieving sustainable peace with each other and with their armed oppositions, as they continue to support respective peace processes”, he told the Council.

“Building upon the recent positive developments in their bilateral relations, the two sides need to resume direct talks immediately to resolve outstanding provisions of their agreements in relation to the final status of Abyei.

We continue to work closely with the African Union, particularly the AU High-Level Implementation Panel, in support of a political process between the two parties.”

The UN peacekeeping chief said UNISFA and the Joint Border Verification and Monitoring Mechanism (JBVMM) “have continued to play a key role in stabilizing the security situation on the ground” deterring violence and some of the lawlessness that has plagued the disputed territory.

Secretary-General António Guterres has recommended that the role of UNISFA “to engage in local mediation, provide political support for dialogue between the two parties, and fulfil protection-related tasks should be strengthened.”

He concluded by saying it was “critical that the only international mechanism operating in the border area is equipped with an appropriate mandate, capabilities, and assets. This would also send a strong signal to the parties that the United Nations remains committed to maintaining stability in the area.”

The UN Special Envoy for the Horn of Africa, Parfait Onanga-Anyanga, also briefed the Council, noting the “encouraging signs of progress” in relations between the countries, quoting Prime Minister Hamdok’s declaration that he wanted to restore the traditional ties between what he sees as “one people living in two States”.

The Envoy noted the “new impetus” to improve relations provided by the historic political changes in Sudan this year. President Kiir had been encouraged “to intensify his mediation efforts between the Government in Khartoum, and Sudanese armed groups”, and risen to the task.

“So far, the Sudanese opposition appears comfortable with President Kiir facilitating their negotiations with Khartoum”, said Mr. Onanga-Anyanga, adding that other countries had expressed interest in hosting coming phases of negotiations.

He said substantive talks between the new Government and armed opposition movements in Sudan, are expected to continue until mid-December.

♦ Receive daily updates directly in your inbox - Subscribe here to a topic.
♦ Download the UN News app for your iOS or Android devices.
Sudan|South Sudan|abyei|security council|peacekeeping 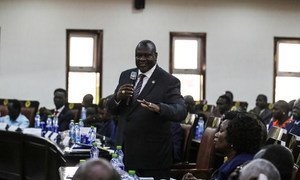 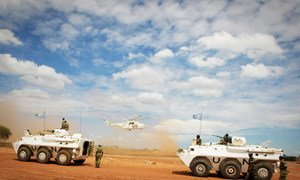