Pesident Salva Kiir and his former deputy, Riek Machar, entered into a peace accord last September, which would see him return as Vice President, in a move to end the country’s brutal six-year civil war – the result of on-going clashes between opposing party loyalists in 2013.

Mr. Shearer said Mr. Machar’s visit to the capital Juba last week, at the invitation of President Kiir, “was an important development”, noting the apparent “conciliatory” demeanor between the two forces who spent “several hours in formal and informal discussions.”

“These meetings need to continue”, he stressed.

A positive outcome of the meeting was the renewed commitment to forming a transitional government, he said, which “maintains the momentum of peace and bolsters confidence among South Sudanese.”

However, the citizens of what is the world’s youngest nation, are proceeding with “cautious optimism”, the Secretary-General’s latest report on future peace plans states.

As a ceasefire has continued in most parts of the country, more internally displaced persons are expressing a willingness to return home. Yet, “several impediments exist, including uncertainty about the peace process,” the peace plan highlights.

Mr. Shearer said the challenge of receiving “tangible results” towards a lasting peace, still remains and highlighted the need for progress in three areas: Unification of security forces; political consensus on the number of states and boundaries; and finalizing leadership details of the transitional government.

The Mission chief praised the positive outcomes so far, including diminishing cases of displacement, improvements in food security and commitment to security at the grassroots level.

If more people can return home, food and farming productivity can also pick up, Mr. Shearer said. According to the Food and Agriculture Organization (FAO), South Sudan’s cereal production has increased by 150,000 metric tonnes in the last year, “an indication of what peace can provide.”

“Still, some 6.3 million people – or 54 percent of the population – remain food insecure and have limited access to healthcare. And we’ve also noted, that child malnutrition in the short term, has also increased”, he lamented, though “severity maps” from the Integrated Food Security Phase Classification (IPC) show a trend in “becoming more orange and yellow, rather than red.”

In terms of getting people help on the ground, access is “improving” Mr. Shearer reported, adding that incidents are down 30 per cent from last year, which has “emboldened humanitarians to plan greater outreach to more remote areas.”

UNMISS is doing its part to rebalance deployment of peacekeepers, “moving away from static protection…to increase confidence building patrols in areas where people will be returning to”, he said.

“However, the Government must take the lead” when it comes to creating a climate of safety for its people.

Mr. Shearer stressed that “a South Sudan that is truly at peace will no longer need UN protection sites.”

Looking forward, he underscored the pivotal role of national elections in the years ahead, stressing that the new Transitional Government “provides an opportunity to lift our gaze from immediate challenges,” and see the official change in Government as a chance to resolve conflict by “democratic rather than violent means.”

The political space should address the country’s lack of transparency when it comes to oil revenue spending, unpaid soldiers, and delayed pay for civil servants.

“The bottom line is this. While the situation for many South Sudanese citizens remains bleak, the last year of peace has kick-started a transformative process that is improving lives,” Mr. Shearer concluded.

He recounted personally witnessing “former enemies, once committed to killing each other, sitting amicable across the table planning a future together.”

If South Sudan’s officials “every needed inspiration to reconcile and work in the country’s best interests, they can find it under trees and in tukuls where communities are coming together to build peace,” he said.

Attesting to work by UNMISS alongside local communities, Mr. Shearer said, “I promise you” work is being done “to lay strong foundations so that peace is sustained.”

“The peace process remains precarious, but progress is being made,” the special representative encouraged.

♦ Receive daily updates directly in your inbox - Subscribe here to a topic.
♦ Download the UN News app for your iOS or Android devices.
South Sudan|security council 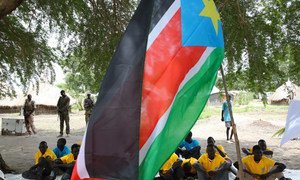 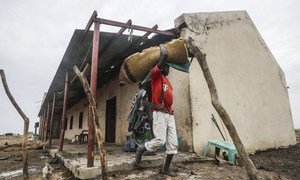 The peace dividend from last year’s ceasefire in South Sudan is palpable, but political elites need to follow the example set by local communities on the ground if lasting progress is to be achieved, said the top UN official in the country on Tuesday.