The leaders of the divided island of Cyprus have met in the capital Nicosia, in an  encounter convened by the United Nations, the Secretary-General’s Good Offices Mission in Cyprus said on Tuesday.

The meeting is the first between the Greek Cypriot leader, Nicos Anastasiades, and the Turkish Cypriot leader, Ersin Tatar, since the latter assumed his post following elections last month.

Both representatives had “expressed their determination to positively respond to the UN Secretary-General’s commitment” to convene fresh talks about the island, “at an appropriate stage”, the UN statement said, describing their meeting as “cordial” and “informal”.

Under the auspices of the Special Representative and Deputy Special Adviser to the Secretary-General on Cyprus, Elizabeth Spehar, agreement was also reached that any such future UN-led discussions would follow the “five-plus-United Nations” format, shorthand for representation featuring Cyprus's two communities, along with guarantor powers Greece, Turkey and the United Kingdom.

UN chief António Guterres met Mr. Anastasiades and the then Turkish-Cypriot leader Mustafa Akıncı, in Berlin 12 months ago, in talks facilitated by the German Government.

Following that informal encounter, Mr. Guterres indicated that both men had reaffirmed their commitment to achieving a settlement that would ensure a peaceful future for the island, as laid out in the 2014 Joint Declaration on Cyprus.

In the opening lines of that text, both leaders were in agreement that “the status quo is unacceptable” and that prolonging it “will have negative consequences for the Greek Cypriots and Turkish Cypriots”.

They also expressed their “determination to resume structured negotiations in a results-oriented manner, with the aim of aim reaching a settlement “as soon as possible”, which would be followed by “separate simultaneous referenda”.

Talks were last held in Switzerland in 2017 on the future of the island, which has been divided since 1974.

Those discussions centred around six main issues, including security and guarantees, new territorial boundaries and power-sharing, but talks stalled after a week. 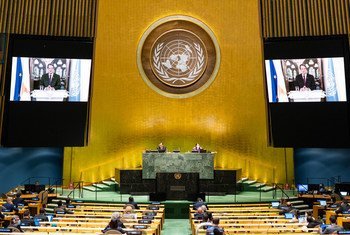 President Nicos Anastasiades of Cyprus stands ready to resume talks on the reunification of the island nation, the UN General Assembly heard on Thursday. 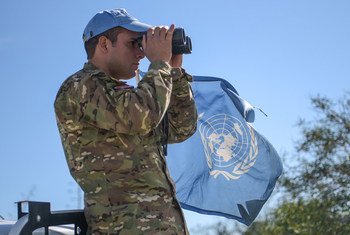 The UN Secretary-General held “focused and frank” informal talks with the leaders of the Greek and Turkish Cypriot communities on Monday in order to “take stock of efforts” to finally reach a settlement over the divided Mediterranean island.