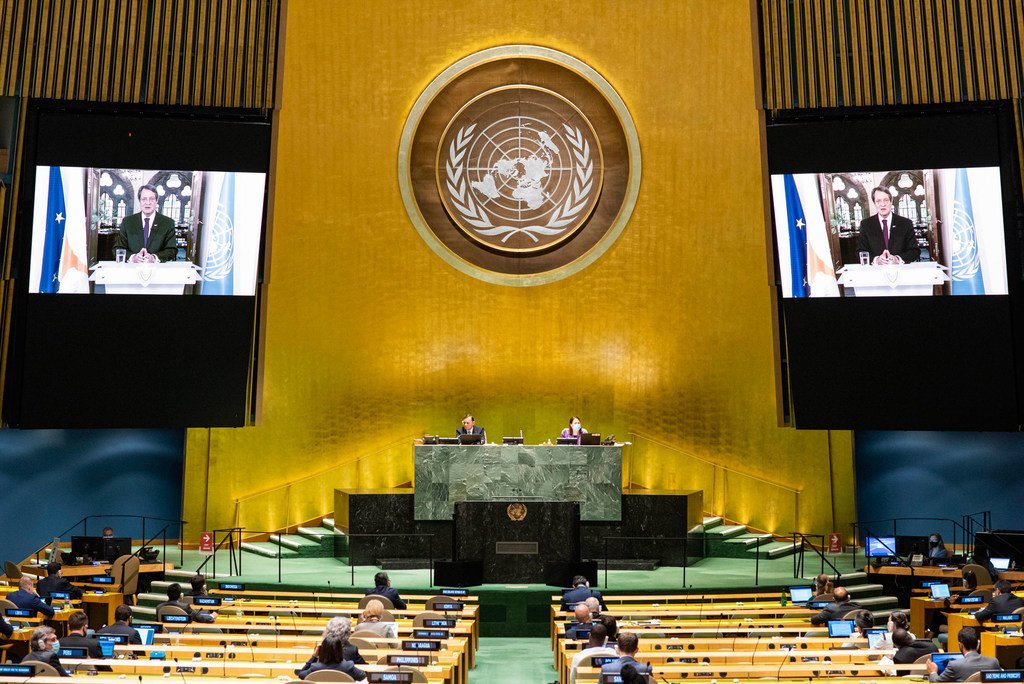 President Nicos Anastasiades of Cyprus stands ready to resume talks on the reunification of the island nation, the UN General Assembly heard on Thursday.

Cyprus has been divided for more than four decades, and leaders from its Greek and Turkish communities last met three years ago at a UN-facilitated conference in Crans-Montana, Switzerland.

Discussions in the alpine village centred around six main issues, including security and guarantees, new territorial boundaries, and power-sharing. Greece, Turkey and the United Kingdom served as guarantors, with the European Union as an observer. The talks stalled after a week.

“Unfortunately, despite our positive engagement and the submission of credible and realistic written proposals, the negotiations were unsuccessful due to Turkey’s inflexible stance and insistence on maintaining the anachronistic Treaty of Guarantee and the right of intervention, as well as a permanent presence of troops,” said Mr. Anastasiades, whose pre-recorded speech was broadcast in the General Assembly Hall.

“Ever since, and despite our disappointment, we have repeatedly conveyed our commitment to immediately resume direct talks for a settlement of the Cyprus problem from where we left off at Crans-Montana.”

A return to negotiations

The President has welcomed the UN Secretary-General’s efforts towards resuming the negotiation process.

The Secretary-General later issued a statement outlining his commitment to exploring the possibility of convening an informal UN meeting with the two leaders and the three guarantors “at an appropriate stage”, adding “It is acknowledged that this time must be different.”

Mr. Anastasiades underlined his commitment to resuming the peace process “in line with the relevant joint understanding reached with the UN Secretary-General” in November 2019

“I expected, following the recent statement of the Secretary-General of his intention to resume negotiations, that Turkey would response in a positive way,” he said.

“However, it is with deep regret that we were informed of the reaction of Turkey, through public statements of his (sic) Minister of Foreign Affairs who argued that their aspiration and aim is to establish or impose a two-state solution or a confederal system of Governance.”

The 75th session of the UN General Assembly is taking place amid the COVID-19 pandemic.

Mr. Anastasiades said the only way forward in the crisis is through global solidarity, which includes equitable sharing of any COVID-19 vaccine once it is developed.

As is the case with organizations worldwide, the pandemic has forced the UN to adapt its working methods to comply with physical distancing measures.

World leaders have pre-recorded their speeches for the annual debate, which are being broadcast on giant screens in the iconic General Assembly Hall.

Despite not being able to gather this year, participation by Heads of State and Government is at a record high, the UN reports.

♦ Receive daily updates directly in your inbox - Subscribe here to a topic.
♦ Download the UN News app for your iOS or Android devices.
UNGA75|cyprus