Secretary-General António Guterres says that he is “deeply sorry” that, despite very strong commitments and the engagement of all delegations, the United Nations-facilitated Conference on Cyprus concluded without reaching an agreement.

“Unfortunately […] an agreement was not possible and the conference was closed without the possibility to bring a solution to this dramatically long-lasting problem,” Mr. Guterres told the press in the early hours of Friday in the Swiss town of Crans-Montana, where the talks took place.

However, he noted that, in spite of the closure of the Conference, initiatives can still be pursued and developed in order to address the issues that were being discussed.

“The UN role is the role of a facilitator and we will always be at the disposal of the parties willing to come to an agreement, if that would be the case,” he added.

The Conference had begun on 28 June in the hopes of reaching a comprehensive settlement to the conflict that has divided the Mediterranean island for more than four decades.

In his remarks, Mr. Guterres also expressed his appreciation to the Greek Cypriot and Turkish Cypriot leaders as well as to the representatives of the guarantors – Greece, Turkey and the United Kingdom – and the European Union, which served as an observer.

He also thanked the UN team, led by Espen Barth Eide, the Special Adviser to the Secretary-General on Cyprus, for doing everything possible to bring closer together the positions of the different delegations.

A settlement to Cypriot dispute ‘closer than ever before, but there’s still a way to go’ – UN Special Adviser 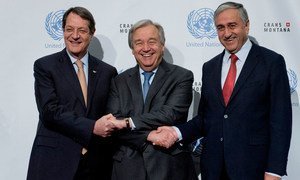 Secretary-General António Guterres has met with the leaders of the Greek Cypriot and Turkish Cypriot communities and their backers at the Conference on Cyprus in Switzerland, saying there is now an understanding of what is needed for a possible settlement on the Mediterranean island.