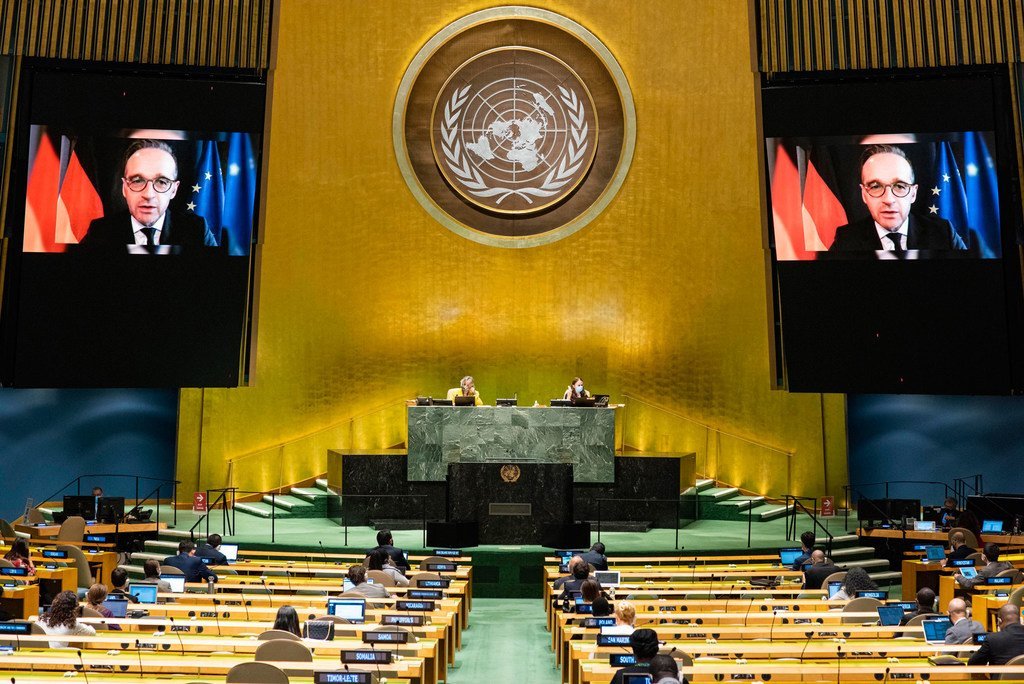 The COVID-19 pandemic has revealed how international cooperation “delivers results” in efforts to resolve conflict, though there is still a long way to go, Germany’s Foreign Minister told the UN General Assembly in a pre-recorded speech broadcast on Tuesday.

Heiko Maas highlighted examples of recent peace efforts, such as the ceasefire in Ukraine, the possibility of renewed talks between the warring sides in Libya, and developments in relations between Israel and Arab countries in the Gulf region.

“This crisis also shows that international cooperation is neither an ideology nor an end in itself. On the contrary, it delivers results,” he said.

Despite this progress, he warned that “we’re still a very long way from a new global attitude,” as the UN Secretary-General’s call for a global ceasefire during the pandemic “is falling on deaf ears in many places.”

The Foreign Minister also stressed the need for greater action against violence and terrorism in the Sahel, and to resolve the nearly decade-long conflict in Syria.

He further cited the importance of justice in achieving lasting peace, both in Syria and elsewhere. He underlined Germany’s commitment to bringing perpetrators of crimes against humanity to account, as well as the country’s support for UN mechanisms that investigate these crimes.

For Mr. Maas, those who “blur the line between right and wrong” jeopardise the international order and peaceful coexistence.

“And this especially applies to those who contravene international law, although, as permanent members of the Security Council, they bear particular responsibility for upholding it.”

Mr. Maas called on Russia to “do more” to investigate the poisoning of opposition politician Alexei Navalny.

“A case such as this must have consequences. The EU (European Union) therefore reserves the right to impose sanctions,” he stated.

Put people at the centre of pandemic response

The Foreign Minister began his speech by reflecting on the COVID-19 pandemic and its longer-term impacts, including hunger, poverty, displacement and conflict.

Due to the ongoing global crisis, the annual debate in the UN General Assembly was held almost virtually, with world leaders providing pre-recorded videos of their speeches.

“As long as the virus is out there, it can affect each and every one of us,” said Mr. Maas, who recorded his statement himself at home, where he is under quarantine after coming into contact with someone who has the virus.

“That is why only when we get the pandemic under control throughout the world will we be able to overcome it in the long term.”

Mr. Maas called for those affected by COVID-19 to be at the centre of all response, while the search for a vaccine against the disease “must not be a competition or a beauty contest.”  Here, he underlined Germany’s “clear commitment” to the fair distribution of any potential vaccines or medicines.

Germany has also allocated more than three billion Euros this year for global crisis management, focused mainly on the UN, the World Health Organization (WHO), the International Monetary Fund (IMF), and the World Bank.

♦ Receive daily updates directly in your inbox - Subscribe here to a topic.
♦ Download the UN News app for your iOS or Android devices.
UNGA75|Germany