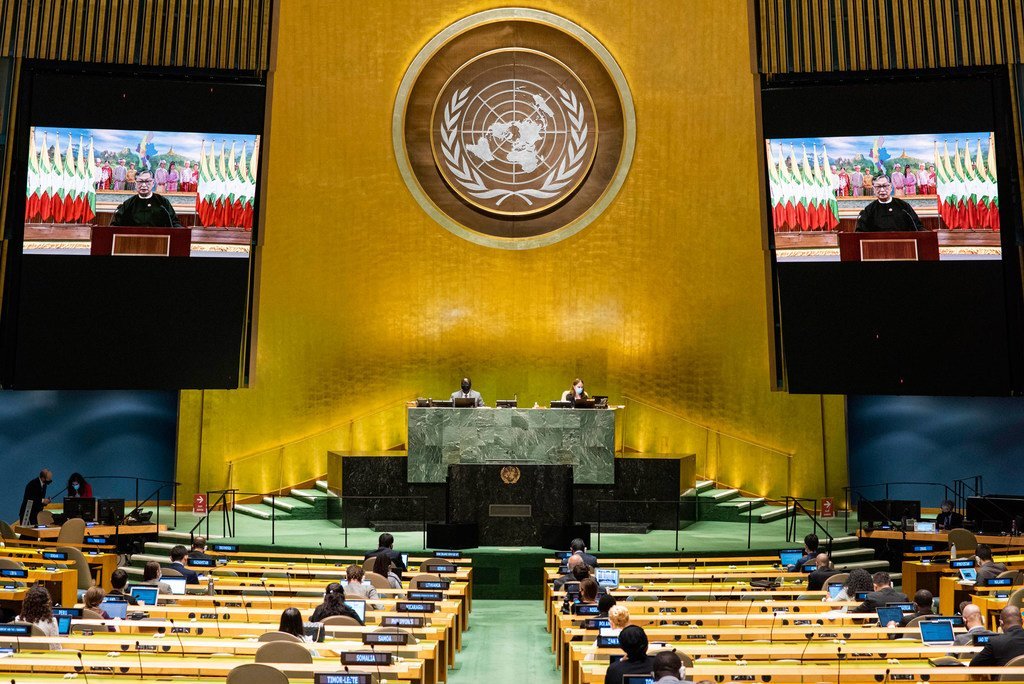 Bilateral cooperation is the only way to effectively resolve the repatriation issue between Myanmar and Bangladesh, the Minister of the Office of the State Counsellor of Myanmar, told the UN General Assembly.

Speaking at the UN Assembly’s annual debate, via a pre-recorded video message, Minister U Kyaw Tint Swe invited the Government of Bangladesh to “show its genuine political will to cooperate, by strictly adhering to the terms of the signed agreements.”

“Should Bangladesh commit itself to the bilateral process it will find Myanmar a willing partner. Pressure tactics will be futile. Myanmar does not react well to pressure,” he added.

The Minister informed the Assembly that while bilateral repatriation had not yet started, more than 350 displaced persons from camps in Cox’s Bazar had returned to Myanmar’s Rakhine state on their own volition through unofficial channels.

In his remarks, the Minister also said that his Government shares the concern over allegations of human rights violations in Rakhine and takes them seriously.

He recalled Aung San Suu Kyi, the State Counsellor of Myanmar, who told a public hearing at the International Court of Justice (ICJ), in December 2019, that if war crimes or human rights violations were committed, they will be investigated and prosecuted by Myanmar’s criminal justice system.

“This is our right, our obligation and our commitment, and it is important for vital domestic processes linked to constitutional reform and peace in Myanmar,” added the Minster, noting steps taken by the Government towards accountability and reconciliation.

Noting that a country should be given time, space and respect for its domestic accountability processes, and cautioning against any bias or “demonization”, the Minister recalled the State Counsellor Aung San Suu Kyi’s message before the ICJ: “Feeding the flames of an extreme polarization in the context of Rakhine […] can harm the values of peace and harmony in Myanmar. Aggravating the wounds of conflict can undermine unity in Rakhine. Hate narratives are not simply confined to hate speech – language that contributes to extreme polarization also amounts to hate narratives.”

Noting that COVID-19 has overwhelmed even resource-rich countries, the pandemic represents a formidable task for a developing country like Myanmar.

He said that Myanmar has taken a whole-of-nation approach, “mobilizing the strength of its people through volunteerism and sharing spirit in the fight against the pandemic.” The measures, he added, proved successful in coping with the first wave of the virus but his country is now facing a second wave.

“The Government has been making parallel efforts both in protecting public health and mitigating the economic impact by implementing its COVID-19 Economic Recovery Plan. Despite the risk of virus import, we are bringing back all our citizens and migrant workers who are facing difficulties in foreign countries where they have no access to social protection,” he said.

In his remarks, the Minister also spoke of the dangers posed by terrorism and hate speech, as well as efforts of his Government to promote social cohesion, addressing sexual violence and preventing violence against children.

♦ Receive daily updates directly in your inbox - Subscribe here to a topic.
♦ Download the UN News app for your iOS or Android devices.
Myanmar|UNGA75|General Assembly