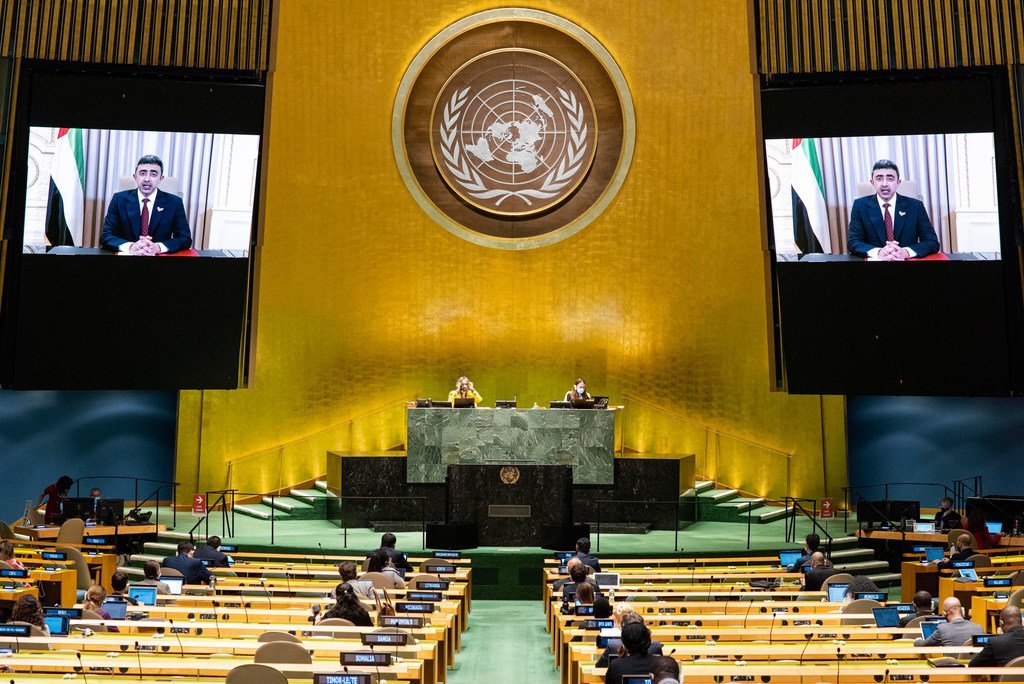 The historic agreement normalizing relations between Israel and the United Arab Emirates (UAE) should boost efforts towards achieving regional peace and a brighter future for generations to come, the UAE’s Foreign Affairs Minister told the UN General Assembly in a pre-recorded speech broadcast on Tuesday.

Sheikh Abdullah bin Zayed Al Nahyan highlighted his country’s diplomatic efforts which affirmed rejection of any annexation of Palestinian territory, as well as its staunch support for a two-State solution in the Middle East.

“With the signing of a historic peace accord with Israel, supported by American efforts, my country was able to freeze the annexation decision and opened broad prospects to achieve a comprehensive peace in the region,” he said, referring to the agreement brokered in August.

“We hope this peace accord will provide the opportunity for the Palestinians and the Israelis to re-engage in negotiations to achieve peace. Our position towards supporting the Palestinian people and achieving the two-state solution is firm.”

Sheikh Abdullah added that the UAE will strive to ensure that the peace deal also “will open new intellectual horizons in the region and create a prosperous path for future generations who deserve a stable region and a better reality than wars and poverty.”

Tuesday marks the final day of the annual high-level debate in the General Assembly Hall at UN Headquarters in New York.

Due to the COVID-19 pandemic, Heads of State and Government, or their representatives, pre-recorded their speeches which were broadcast on giant screens in the chamber.

The global crisis is unfolding in the year the UN celebrates its 75th anniversary, and Sheikh Abdullah urged world leaders to seize this “critical turning point” to “transform challenges into great opportunities” through coordinated international response and wise leadership.

“One starting point should be continuing to focus on solving existing political crises and preventing new conflicts from emerging, especially during the spread of the pandemic,” he recommended.

The Foreign Minister said solving crises, especially in the Arab region, requires taking what he described as “a unified international position” that rejects violation of state sovereignty and foreign interference in internal affairs, and which seeks UN-led political solutions while also addressing threats posed by terrorist groups such as the Houthis, Da’esh, al-Qaeda and the Muslim Brotherhood.

“The tensions in Yemen, Syria, Libya, Iraq and other states are all related to blatant interference in Arab affairs made by states that incite strife and discord, or that have historical delusions of restoring their domination and colonial rule over the Arab region and the Horn of Africa. The result has been brutal wars,” he said.

“In this context, we recall our firm position of rejecting regional interference in Arab affairs, and request full respect for sovereignty, which is fully consistent with international law and international norms.”

Sheikh Abdullah further underscored the need to maintain progress achieved against the extremist group Da’esh, also known as ISIL, in Syria and Iraq.  This requires ongoing efforts to rebuild liberated areas, strengthen the rule of law, and protect communities against extremism and terrorism, he said.

“Support and economic assistance should also be provided to Sudan,” he continued.

“It is also important to prevent any interference in Sudan’s internal affairs and to stop extremist groups from exploiting the situation and threaten the security of the Sudan and its neighboring states.”

♦ Receive daily updates directly in your inbox - Subscribe here to a topic.
♦ Download the UN News app for your iOS or Android devices.
UNGA75|UNITED ARAB EMIRATES