Giles Clarke/UN OCHA
A military guard sits in the former Assembly Hall of the Governor of Saada. Since the Yemen conflict escalated in 2015, much of the city's infrastructure has been destroyed (file photo).

At the end of a week-long meeting in Switzerland, the parties to the conflict in Yemen reached what the UN envoy there called “a very important milestone”, in agreeing to release a first group of detainees.

Delegates from the Yemen Government and the Houthi group, formally known as Ansar Allah, signed an agreement on Sunday to release 1,081 conflict-related individuals, in accordance with the lists of agreed-upon names.

Congratulations to the @ICRC team and the Parties for agreeing on the release plan. https://t.co/MhOPAK3W6V

Welcoming the agreement, UN Secretary-General António Guterres urged the parties “to build on this momentum and finalize arrangements for the release of all remaining detainees,” according to a statement issued by his spokesperson.

He thanked the International Committee of the Red Cross (ICRC) for its “tireless efforts” as co-chair of the Supervisory Committee to ensure the implementation of the prisoner release agreement brokered in Sweden in 2018, as well as the Government of Switzerland for hosting the parties over the past week.

The Secretary-General also called on the parties to engage with his Special Envoy to agree on a Joint Declaration encompassing a nationwide ceasefire, economic and humanitarian measures and the resumption of a comprehensive, inclusive political process to end the war.

“Today is an important day for over a thousand families who can expect to welcome back their loved ones hopefully very soon,” said the UN Special Envoy for Yemen, Martin Griffiths, after the fourth meeting of the Supervisory Committee on the Implementation of the Prisoners’ Exchange Agreement, which was co-chaired by his Office (OSESGY) and the ICRC.

The move builds upon a release plan that the parties had reached in Amman last February. And they also agreed to convene a subsequent meeting of the Supervisory Committee with the aim of implementing the remainder of the outcomes of the Amman meeting.

As per the 2018 Stockholm Agreement, the parties renewed their commitment to release all prisoners, detainees, missing persons, arbitrarily detained and forcibly disappeared persons – and those under house arrest.

Moreover, they committed to making efforts to increase the number of prisoners to be released, including those covered by UN Security Council resolutions.

“I thank the parties for going beyond their differences and reaching an arrangement that will benefit Yemenis”, the UN envoy continued, urging the parties to “move forward immediately with the release and to spare no effort in building upon this momentum to swiftly agree to releasing more detainees”.

In doing so, he said, “the UN, they will fulfil their commitments made in Stockholm and put an end to the misery of many more Yemeni families who are waiting for their loved ones”.

The co-chair, ICRC Regional Director for the Near and Middle East Fabrizio Carboni called the announcement “a positive step for hundreds of detainees and their families back home who have been separated for years and will be reunited soon”.

However, he noted that it marks only the beginning of the process and encouraged parties to continue with “the same urgency” to agree on a concrete implementation plan, “so this operation can move from signatures on paper to reality on the ground’’.

Mr. Griffiths called on the parties “to build on this very important achievement, and to move together towards a negotiated solution to bring lasting peace to Yemen”.

“The United Nations stands ready to support the parties, as well as the Yemeni people, in achieving that”, he assured. 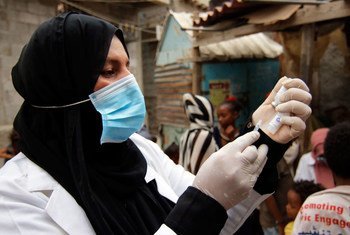 More than five years of war have “devastated the lives of tens of millions of Yemenis”, with experts estimating that up to one million may have been affected by COVID-19, the UN chief told the General Assembly on Thursday. 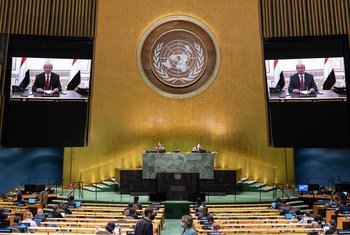 Despite ‘compromises’, peace remains elusive in Yemen, says President, calling for international support to save his country

The President of Yemen on Thursday called on the international community to end the suffering of Yemenis through ensuring “decisive and active” pressure on “the Houthis and Tehran,” and for the implementation of UN Security Council resolutions demanding an end to the violence his country faced.