Despite ‘compromises’, peace remains elusive in Yemen, says President, calling for international support to save his country 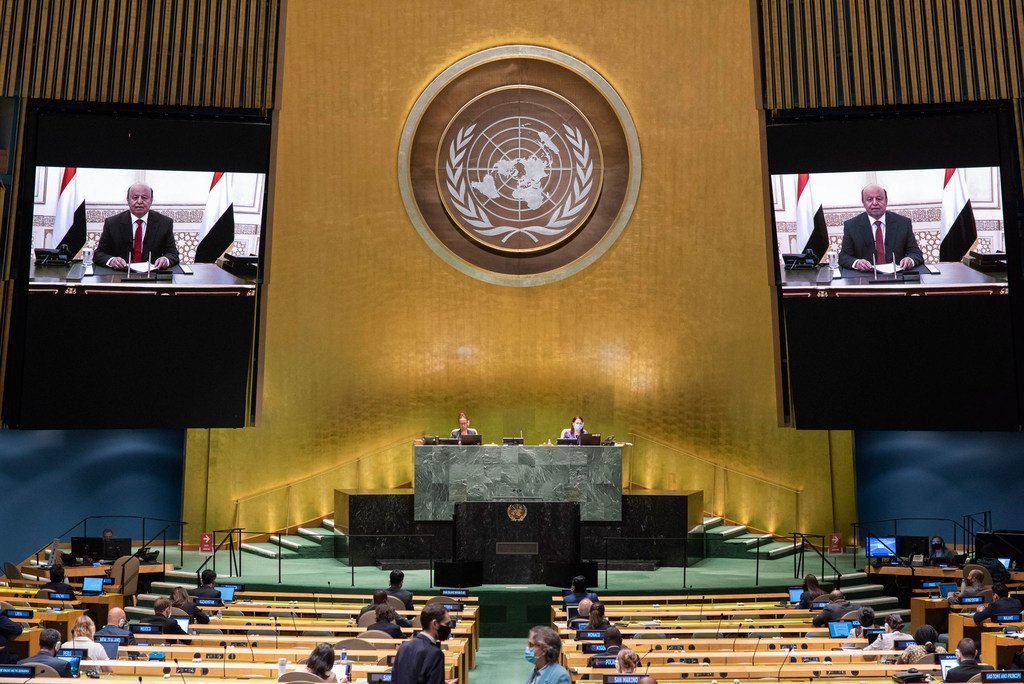 The President of Yemen on Thursday called on the international community to end the suffering of Yemenis through ensuring “decisive and active” pressure on “the Houthis and Tehran,” and for the implementation of UN Security Council resolutions demanding an end to the violence his country faced.

The United Nations had spared no effort to establish sustainable peace and to address ongoing humanitarian challenges, yet, for nearly six years “Yemen has suffered from war imposed on it by those acting with the support of Iran,” President Abd Rabbu Mansour Hadi told the UN General Assembly in a pre-recoded video address.

He said Houthi militias refused to take part in peace talks, and instead had supported coup efforts and invaded the capital, Sana’a. State institutions were taken hostage and liberties were smothered, he said, adding that Houthi militias transformed Sana’a into a “prison”.

President Hadi stressed: “We extended our hand in peace, and did everything in our power to support and facilitate the efforts of the United Nations and its envoy to our country Martin Griffiths and envoys before him in order to save the country and reach a lasting and comprehensive peace to stop Yemeni bloodshed.”

Noting Yemen’s commitment to the ceasefire, he stressed that “concessions were made” throughout the crisis in order to allow for the resumption of the peace process.

The aim of the Government’s transition process is to bring together all Yemeni society and write a new constitution and hold elections in line with that new constitution.  However, the Houthi‑led coup disrupted the process and destroyed society.

“Violence is resulting in the worst case of poverty ever witnessed,” he said, adding that his Government is working to stop bloodletting and establish safe and lasting peace. People in Yemen are rejecting the “Iranian model”, he said, and called for support of the Saudi Arabia‑led coalition to achieve a lasting ceasefire that will allow for a resumption of the political process.

The President said that Iranian‑sponsored terrorists mobilized to attack cities across the country, pointing to a “savage escalation” of violence with no concern for the well‑being of civilians.  These actions demonstrate the true nature of militias. The international community must exert active and determined pressure on militias and their sponsors to ensure respect for relevant United Nations resolutions.

He called on the international community to support his Government’s fiscal and monetary policy to empower Yemeni households and to reject Houthi strategies of blackmail. Tireless support from Saudi Arabia has allowed the Government to begin addressing the crisis. “We need to pool our efforts to ensure construction and development under the aegis of the State,” he said.

♦ Receive daily updates directly in your inbox - Subscribe here to a topic.
♦ Download the UN News app for your iOS or Android devices.
Yemen|UNGA75|General Assembly