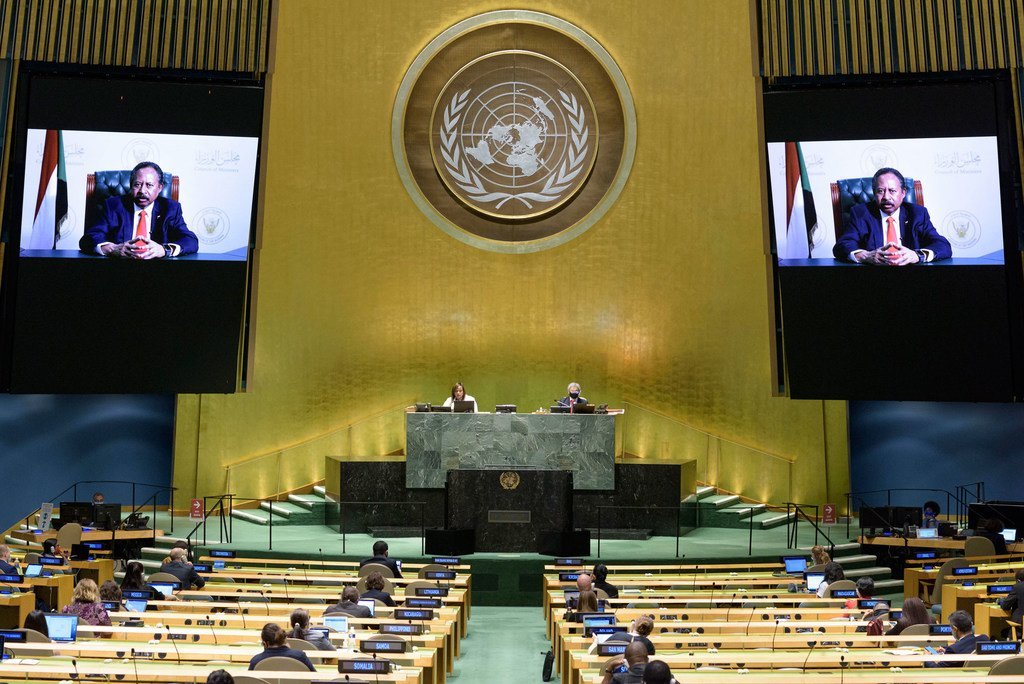 Sudan is eager to again contribute to the international community but will need assistance as it works to revitalize its tattered economy, Prime Minister Abdalla Adam Hamdok told the UN General Assembly on Saturday.

The African country is continuing on a path of political transition following the ouster of President Omar al-Bashir in April 2019.

“Sudan, with the blood of its martyrs, has gone through decades of tyranny, injustice and social deterioration,” he said.

“Despite all of this, this period of transition of the young glorious revolution is experiencing many difficulties, which call for the support of the international community in order to be able to carry out the government’s projects and plans intended to improve the economic situation.”

The Prime Minister made the appeal in a pre-recorded speech that was broadcast during the annual debate in the UN General Assembly Hall. Heads of State and Government are mainly participating virtually this year due to the COVID-19 pandemic.

Mr. Hamdock said Sudan’s transitional government has inherited a “paralyzed economy” and a “weak, devastated service sector”, including a health system that had been neglected for decades.  The “dark, strange enemy” of COVID-19 presents an additional complication.

Sudan has also been hit by recent torrential rain and floods which have caused severe loss of life and property. Tens of thousands of homes have either partially or completely collapsed, he reported.

The authorities are undertaking reforms to restructure the economy and Mr. Hamdock pointed to future plans that include providing social support to poor families and strengthening agricultural production, both in urban and rural areas.

“We are making tireless efforts to reconsider national legislation and ensure that it is in harmony with international criteria and conventions,” he said referring to efforts to “clean up” laws on freedom of expression, protection of women’s rights, and impunity, among other areas.

However, the Prime Minister stated that international support is critical if the economic reforms are to happen.

Therefore, debt forgiveness and “preferential treatment” are top concerns. Sudan also should be removed from the list of countries that sponsor terrorism, he added.

“Sudan has returned to the international fold after 30 years outside it. This must happen! But we need this assistance and support in order to do so,” he said.

“It is our hope that we will be able to accomplish projects of reconstruction and reform so that Sudan will become once again an active player on the regional stage and to contribute to the international community and work to create the future we want.”

♦ Receive daily updates directly in your inbox - Subscribe here to a topic.
♦ Download the UN News app for your iOS or Android devices.
Sudan|UNGA75|General Assembly