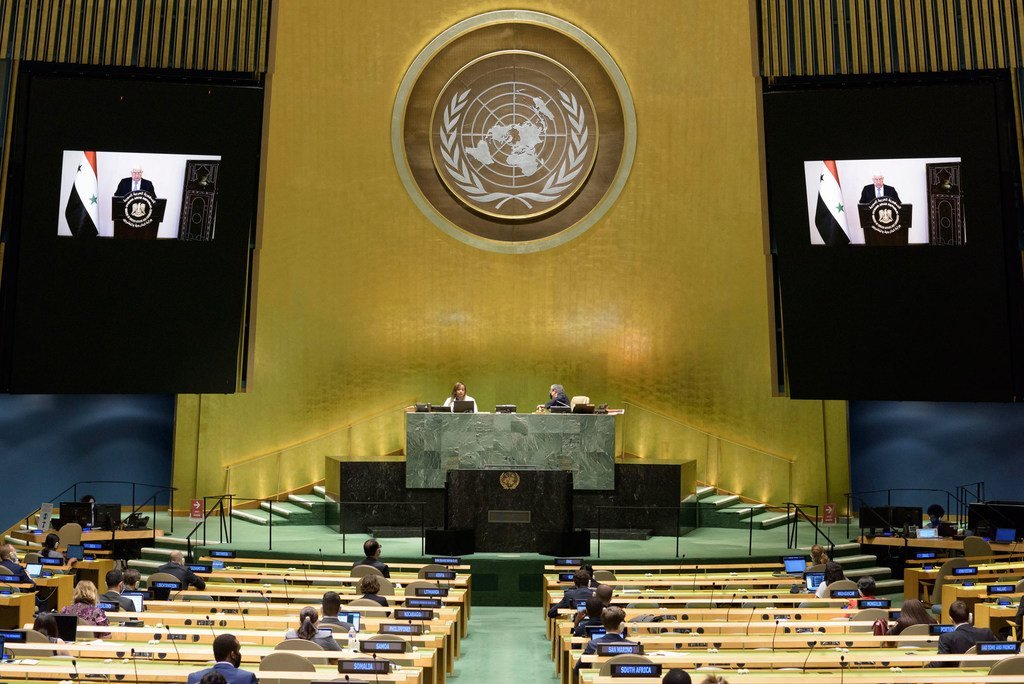 As some States continue to pursue their own narrow agendas above all else, the world is straying further from the principles that underpin international norms and the work of the United Nations, the Foreign Minister of Syria told the high-level General Assembly plenary on Saturday.

Walid Al-Moualem, who is also Syria’s Deputy Prime Minister, attributed the decline to Governments that have “illegally imposed their own agendas on other nations”.

“The situation today does not bode well for the future we want, nor does it reflect the United Nations we need”, Mr. Al-Moualem said in a pre-recorded video address to the Assembly’s annual debate, being held virtually this year due to the coronavirus pandemic.

The Foreign Minister maintained that his country wants a secure future, “free from terrorism, occupation, and inhumane sanctions” and a UN that “unequivocally stands against wars and warmongers…while avoiding politicization, illegal interference and attempts to destroy nations and communities”.

According to Mr. Al-Moualem, the COVID-19 pandemic has made this more important than ever.

“Today’s imperative is that we combat this pandemic together through multilateral joint action…to build a more equal world, better equipped to withstand crises and achieve real sustainable development for all”, stated the Syrian official.

He maintained however, that the reality on the ground is “the complete opposite” and painted a picture of political agendas taking precedence over humanitarian ones, and tradional international norms.

When life-saving medications and medical equipment are “blocked in the middle of a pandemic”, efforts to rebuild Syria “after the destruction brought by terrorists” obstructed, wheat fields burned, oil fields looted and the energy sector targeted it only serves to deny civilians “access to food, heating, gas and electricity”, underscored Mr. Al-Moualem.

The Foreign Minister called on countries to close ranks and “reject such measures” through “cooperation, coordination, and concrete political, economic and commercial means”.

Turning to the issue of terrorism, Mr. Al-Moualem asserted that “the current Turkish regime reigns supreme”.

He called Turkey “one of the main sponsors of terror” in the region, signaling that it has facilitated tens of thousands of foreign terrorists into his country, supported terrorist groups “that have massacred Syrians” and carried out “a 'Turkification' and forced displacement policies” in the Syrian territories it occupies.

“The current Turkish regime has become a rogue and outlaw regime under international law”, spelled out the Foreign Minister, warning that its policies and actions “must be stopped”.

Moreover, the “illegitimate presence of American and Turkish forces on Syrian soil meets all the legal conditions of an occupation”, he continued, referring to their actions as “a flagrant violation of Syria’s sovereignty, independence, and territorial integrity”.

Finally, Mr. Al-Moualem pointed to the “systematic and grave violations of human rights” that Israel practices in the Golan and renewed Syria’s support for Iran “against the US policy” to undermine the nuclear agreement and destabilize the region.

♦ Receive daily updates directly in your inbox - Subscribe here to a topic.
♦ Download the UN News app for your iOS or Android devices.
UNGA75|syria|General Assembly