‘Instead of nationalism, we need global cooperation’; Caribbean leaders call for united front against COVID-19 pandemic 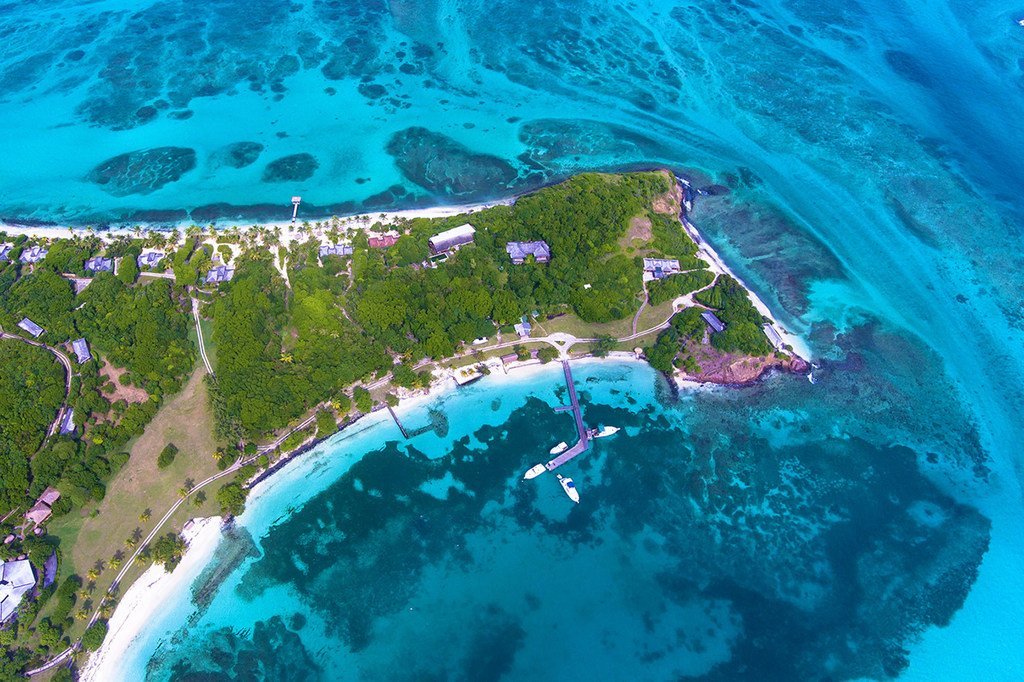 Coral Reef Image Bank/Hugh Whyte
The future of Small Island Developing States like Saint Vincent and the Grenadines in the Caribbean is very closely linked to the ocean.
26 September 2020
UN Affairs

Leaders from the Caribbean, in pre-recorded addresses to the UN General Assembly, stressed that their small economies are largely dependent on one or just a few industries, and called for strengthened global cooperation and financing mechanisms to overcome the health crisis sparked by the coronavirus pandemic and recover from its massive socio-economic fallout.

Speakers also highlighted the importance of gender equality, improving access to technology and closing the digital divide, addressing inequalities within societies, strengthening climate action, and, in line with the Sustainable Development Goas (SDGs), ensuring no one is left behind.

Nations have to re-imagine the ways they cooperate as they respond to COVID-19, said Andrew Holness, the Prime Minister of Jamaica, the first of the Caribbean leaders to speak, adding that “persistent global problems require consistent cooperation to achieve strategic global solutions.”

An excellent example of such effective multilateral cooperation is the UN COVID-19 Response and Recovery Fund, he said. The Fund supports low- and middle-income countries overcome the health and development crisis caused by the pandemic and support those most vulnerable to economic hardship and social disruption.

The inclusion of middle-income countries “recognizes the reality”, added the Prime Minister, referring to the development challenges faced by this group of countries.

Through ensuring middle-income countries are able to access support they need will allow the entire international community to reap benefits, he said.

In his address, the Prime Minister Jamaica also voiced concerns over the socio-economic fallout from the pandemic, in particular on efforts to beat back non-communicable diseases, as well as the disproportionate impact on, and rise in, violence against women and girls.

We protect ourselves, when we safeguard our neighbours

In the same vein, Ralph E. Gonsalves, the Prime Minister of Saint Vincent and the Grenadines, highlighted that in the increasingly interconnected and hyper-globalized world “we protect ourselves when we safeguard our neighbours.”

Today’s urgent challenges “cannot be solved by building walls” or by retreating into nationalistic isolationism, he said, stressing “we must build bridges” and stand shoulder to shoulder as we lift each other up from COVID-19.

The Prime Minister also spoke of the unique challenges facing small island developing states (SIDS) – including his own country. He underscored the need for “predictable and reliable” financing such as through concessional loans, development assistance, and debt relief, to help such nations safeguard their development progress.

Instead of nationalism, we need global cooperation

Speaking next, the Prime Minister of the smallest nation in the Western Hemisphere, Saint Kitts and Nevis, also underscored the moment of global reckoning wrought by the pandemic “demands a renewal of purpose and promise” through multilateralism, and stronger international cooperation.

Prime Minister Timothy Harris said that the time for mutual reliance was now.

He congratulated the UN World Health Organization (WHO) for its stewardship of the international response, adding that Caribbean Community (CARICOM) states strongly back the COVID-19 Tools Accelerator initiative for an equitable vaccine: “Instead of nationalism, we need global cooperation in the fight to defeat COVID-19”, he said.

Lauding his islands’ “considerable success” combating the virus, he said multilateral assistance was essential for small island nations like his, calling for greater access to “concessional financing” and debt relief to help reshape the economy, battered by everything from a record-breaking hurricane season to the collapse of tourism revenue.

“Climate change for us, is not something to be postponed for tomorrow. It must be addressed like yesterday,” Prime Minister Harris said, calling on small island nations to champion the cause of preserving biodiversity, at next week’s summit-level meeting of the General Assembly.

“For Saint Kitts and Nevis, the ocean is our lifeblood. Let us protect it, to preserve a stronger and safer future,” he added.

Also speaking on Saturday, the Prime Minister of Saint Lucia, Allen Michael Chastanet, told the virtual gathering of delegates there were perhaps more global risks besetting the world now than ever before, “forcing us to consider deeply, the future we want and the United Nations we need.”

Effective multilateral action was essential, he argued, especially to assist SIDS such as Saint Lucia, as they struggle against the “pervasive erosion of our hard-fought developmental gains.”

He asked nations around the world to consider the reality of supporting the SDGs in countries where life is a daily struggle: if parents “don’t have a means to put a roof over their family’s head, how are they going to participate, or even care about the [Goals]?”

Locked out of the world’s “economic architecture”, Prime Minister Chastanet said small island developing States were often the most vulnerable, while being the least responsible for the predicament they find themselves in, especially when it comes to fighting climate change.

“SIDS are the smallest emitters of carbon, yet we are the most affected by climate change.”

He pointed out that all these paradoxes are man-made, and the solution sometimes requires no more than “the stroke of a pen”.

“We cannot continue to attend meetings to discuss solutions within the current framework…New forms of measurement and criteria must be adopted that are going to allow SIDS the opportunity, to help ourselves”, he declared.

Nations small and big depend on each other

Echoing speakers before him, the Prime Minister of Trinidad and Tobago spoke of the shared reliance among all countries, regardless of their size: “they anticipate, and even depend on us all sharing and caring for each other,” he said.

Prime Minister Keith C. Rowley told world leaders that as with other SIDS battling the impact of COVID-19, his country also had to “walk a thin line” between saving lives and preserving livelihoods. It acted to close its borders and implemented physical distancing, making adjustments as needed to protect the most vulnerable.

He applauded the WHO for its leadership and commended healthcare and frontline workers everywhere for saving lives and caring for people, often at significant personal sacrifice.

“The COVID-19 pandemic presents an existential threat of unmatched proportions to human health and safety around the world,” he said, not only because of its impact on health, but also on years’ worth of development gains.

Mr. Rowley underscored the importance of education for children to enable them with the tools and the opportunities to build a better future. Recalling the words of his country’s first Prime Minister, Eric Williams, Mr. Rowley said, “the future of our nation is in our children’s school bags”.

Thus, his country remains attentive to the needs of all its children, he continued, adding “as we navigate through these challenging times, we remain committed to ensuring that no child is left behind in our campaign to build back better.”

In his address, the Prime Minister also spoke about the perils of climate change for his country, other small island nations and least developed countries everywhere, and added that his Government accords high priority to gender equality, reaffirming its commitment to the Beijing Declaration.

‘After Hurricane Dorian, little did we know…’

Also speaking on Friday, Prime Minister of the Bahamas expressed his solidarity with all other nations fighting COVID-19 and his condolences at the loss of lives.

When he addressed the General Assembly last year, in the aftermath of Hurricane Dorian – the most powerful storm to hit the Bahamas in recorded history – Hubert Minnis said he implored world leaders to treat the climate emergency as the greatest challenge facing humanity.

“Little did we know that just a few months later, an even greater challenge would emerge, forcing the world to come to a grinding halt, at a proportion not witnessed since the Second World War.”

The Bahamas like so many other had to act decisively to keep the COVID-19 pandemic from spreading, but with tourism as the main earner for the islands, the closure of borders led to the sharpest decline ever of visitor numbers precipitating widespread economic slowdown and unprecedented unemployment, he said.

However, SIDS – like the Bahamas – “always appear” to operate in a recovery cycle mode, having to deal with external shocks and climate events, at a much higher rate of vulnerability, he said, calling for a review of methodologies used by international financial institutions to take into consideration exposure, vulnerability and ability to recover from exogenous shocks.

The Prime Minister applauded the G20 for suspending debt service payments for least developed countries and urged that the concession be extended to other economic groupings as well.

Wrapping up, he said that while he remains “cautiously optimistic” for a viable COVID-19 vaccine in the not too distant future, he takes note of the collaborative efforts of the COVAX facility to secure arrangements for developing countries.

“Developing countries should be able to access vaccines via a transparent procurement process at affordable market rates,” urged the Prime Minister of the Bahamas.

♦ Receive daily updates directly in your inbox - Subscribe here to a topic.
♦ Download the UN News app for your iOS or Android devices.
UNGA75|General Assembly|BAHAMAS|TRINIDAD AND TOBAGO|Saint Lucia|SAINT KITTS AND NEVIS|SAINT VINCENT AND THE GRENADINES|jamaica