Republic of Korea stresses support for developing nations during COVID-19 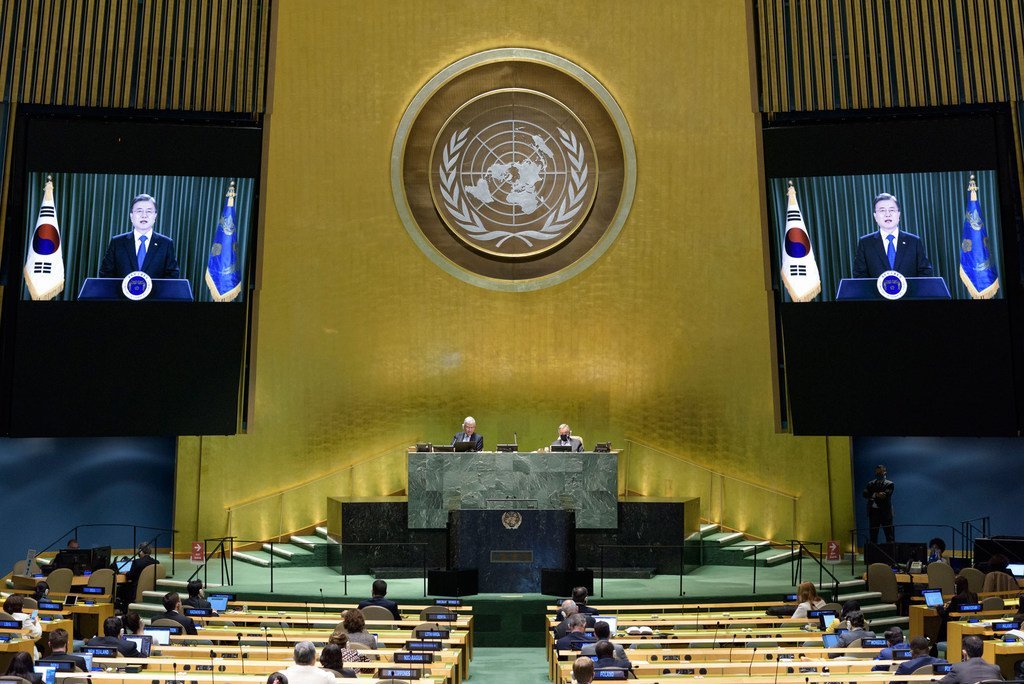 The President of the Republic of Korea has signaled his country’s support to developing nations during the COVID-19 pandemic, which includes ensuring they have equitable access to any vaccines against the deadly new coronavirus.

“It is evident that the UN’s idea of inclusive multilateralism will first be tested by whether it can distribute COVID-19 vaccines to all nations or not,” said President Moon Jae-in in his speech on Tuesday to the UN General Assembly.

The Republic of Korea, also known as South Korea, is among more than 170 countries participating in the COVAX Facility: a global mechanism to deliver fair and timely access to any vaccines.

“We must not only enhance international cooperation for developing vaccines and treatments but also guarantee their equitable access for all countries, once they are developed,” said Mr. Moon, whose interpreted speech was pre-recorded for the event.

“Through global funding, we should facilitate advance purchase of sufficient doses of vaccines for international organizations to ensure that impoverished and developing countries can also share in the benefits.”

He added that his country will provide “active support” geared towards developing and distributing affordable vaccines for developing countries.

As concerns remain over nations experiencing a second and even third wave of COVID-19 infections, the Republic of Korea also will also share its experience in responding to the pandemic, he continued.

President Moon stressed that multilateralism must be strengthened, even amidst a crisis. He highlighted the value of solidarity, cooperation and free trade, as well as the need to achieve the twin goals of disease prevention and revitalization of the global economy.

“Korea will work with all nations to minimize effects of COVID-19 and hasten economic recovery, and actively participate in international cooperation to promote inclusive multilateralism the UN is seeking to accomplish," he pledged.

Learning from the pandemic

Mr. Moon also revealed how his country fought back against the disease through principles of openness, transparency and democracy.

“We learned that, in the end, what empowers Korea to weather the novel coronavirus was the very values cultivated by humanity and championed by the UN,” he said.

“The answer to overcoming COVID-19 is not far from us. It lies in returning to the spirit of the UN Charter, that is believing in universal values of humankind, and it lies in marching toward a more inclusive world through multilateral action.”

Developments on the Korean Peninsula

President Moon also reported on his administration’s ongoing steps towards reconciliation with neighbouring Democratic People’s Republic of Korea (DPRK), and its “relentless efforts” towards achieving peace and denuclearization of the Korean Peninsula.

He stated that inter-Korean cooperation in disease prevention and control would also trigger broader dialogue and cooperation, particularly as COVID-19 has shown that the safety of a country is directly linked to the safety of its neighbours.

Mr. Moon proposed the launch of a North-east Asia Cooperation Initiative for Infectious Disease Control and Public Health, which would bring together his country and the DPRK, also known as North Korea, as well as China, Japan and Mongolia.

“A cooperative architecture that guarantees collective protection of life and safety will lay the groundwork for North Korea to have its security guaranteed by engaging with the international community,” he posited.

As this year also marks the 70th anniversary of the outbreak of the Korean War, the President said “Time has come to remove the tragedy lingering on the Korean Peninsula. The War must end, completely and for good.”

♦ Receive daily updates directly in your inbox - Subscribe here to a topic.
♦ Download the UN News app for your iOS or Android devices.
UNGA75|Republic of Korea

The UN is not a building in New York city, it is our commitment to future generations, Indonesian President tells world leaders

Global solution to COVID-19 in sight, ‘we sink or we swim together’ – WHO chief