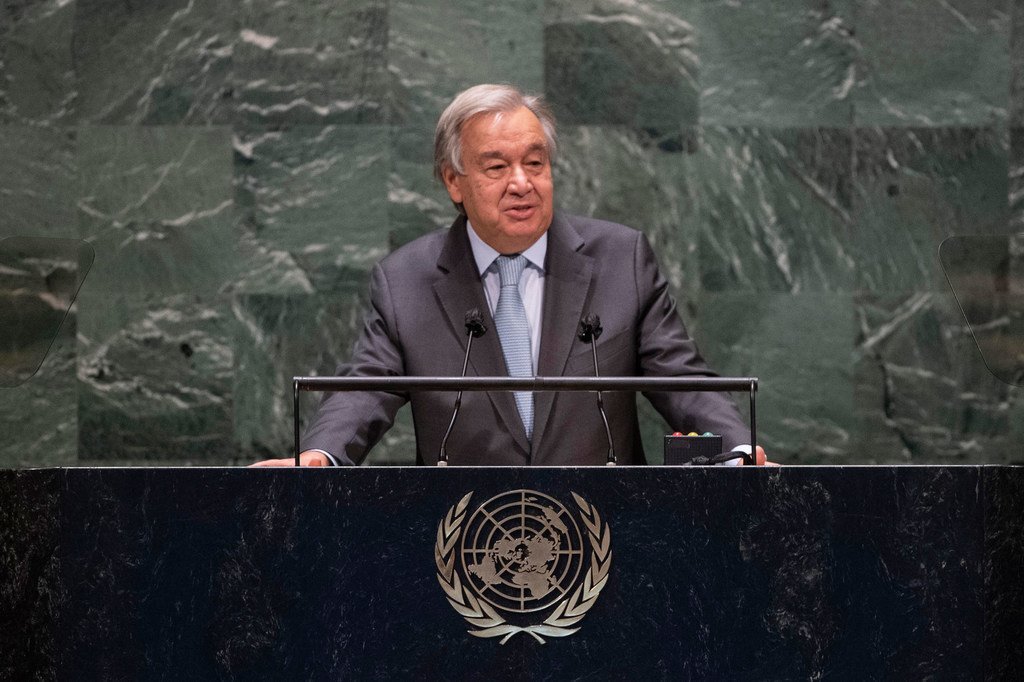 Addressing the largely empty General Assembly Hall in New York, Mr. Guterres characterized the pandemic from the podium as “not only a wake-up call” but “a dress rehearsal” for challenges to come.

“In an interconnected world, it is high time to recognize a simple truth: solidarity is self-interest.  If we fail to grasp that fact, everyone loses”, he said, delivering his annual report on the work of the Organization.

75 years ago, the founders of the @UN began their work during the heat of conflict.

Now it falls to us to chart our way out of danger, together.

The Secretary-General underscored the need for solidarity at this moment, particularly as countries least capable to address COVID-19 have received far too little assistance. He urged the UN’s 193 Member States to move forward in humility and unity in the face of the disease.

“And we must be guided by science and tethered to reality”, he added. “Populism and nationalism have failed. Those approaches to contain the virus have often made things manifestly worse.”

Due to COVID-19, most world leaders will not attend the annual gathering at UN Headquarters, known as the General Debate.  Instead, many have pre-recorded their speeches on video, although they have the right to deliver them in person - from their seat in the Hall, not from the podium.

“In a world turned upside down, this General Assembly Hall is among the strangest sights of all”, Mr. Guterres remarked at the outset. “The COVID-19 pandemic has changed our annual meeting beyond recognition.  But it has made it more important than ever.”

He said the pandemic has exposed fragilities and inequalities across the globe.  It has generated “an epochal health crisis”, the biggest economic and job losses since the Great Depression, and dangerous new threats to human rights, among other challenges.   As of Tuesday, there were more than 31 million cases of the coronavirus disease worldwide, with over 962,000 deaths.

Mr. Guterres also used the occasion to repeat his call for a global ceasefire during the pandemic. The Secretary-General had initially issued the appeal back in March, when he urged warring parties to “end the sickness of war and fight the disease that is ravaging our world”.

Some 180 Member States have endorsed the appeal, as have religious leaders, regional partners and civil society networks. Several armed movements also responded, some of whom announced ceasefires, though they were not sustained.

Mr. Guterres saw several reasons to be hopeful now, with the peace agreement in Sudan, and peace talks in Afghanistan, as just two examples. However, he feared terrorist and violent extremist groups will exploit the pandemic.

“Now is the time for a collective new push for peace and reconciliation”, he charged. “I appeal for a stepped-up international effort - led by the Security Council - to achieve a global ceasefire by the end of this year. We have 100 days.  The clock is ticking.”

The ceasefire is not only critical to stop “hot” conflicts, he stressed, pointing to the need to avert a new Cold War.

“We are moving in a very dangerous direction.  Our world cannot afford a future where the two largest economies split the globe in a Great Fracture — each with its own trade and financial rules and internet and artificial intelligence capacities”, the Secretary-General warned.

“A technological and economic divide risks inevitably turning into a geo-strategic and military divide.  We must avoid this at all costs.”

COVID-19 could also see progress on gender equality pushed back by decades, he continued, as women and girls are overwhelmingly affected by the social and economic fallout, including in areas such as employment and education.

“We must also stamp out the horrifying increase in violence against women and girls during the pandemic, from domestic violence to sexual abuse, online harassment and femicide”, said Mr. Guterres.

“This is a hidden war on women. Preventing and ending it requires the same commitment and resources that we devote to other forms of warfare.”

For the Secretary-General, recovering from COVID-19 must lead to a better future for all, anchored by inclusive, sustainable and resilient societies.

He emphasized the need for what he labelled a New Social Contract, at the national level, and a New Global Deal, applicable internationally.

Mr. Guterres explained that the New Social Contract has several components, such as ending exclusion, discrimination and racism, and establishing Universal Health Coverage and even a possible Universal Basic Income.

It also entails having fairer tax systems, providing education for all, harnessing digital technology, and ensuring human rights as well as opportunities for women and girls.

As part of their COVID-19 recovery, the Secretary-General encouraged countries to consider six climate-positive actions, ranging from green jobs and ending fossil fuel subsidies, to aligning any industry bailouts with international goals to limit global warming.

The New Global Deal seeks to make sure power, wealth and opportunities are fairly shared. He said it must be rooted in fair globalization, while sustainable development principles should be integrated into all decision-making.

The Secretary-General believes that after more than seven decades, multilateral institutions need an upgrade to more equitably represent all the world’s people, rather than giving disproportionate power to some, and limiting the voice of others.

He laid out a blueprint for this “21st century multilateralism”, saying it must be “networked” -- that is, linking global institutions, such as development banks, regional organizations and trade alliances, across sector and geographies.

Additionally, it, too, must be inclusive, and should draw on the capacities of civil society, academia, businesses and others.

Mr. Guterres made the case for more international cooperation in the face of COVID-19, stressing that there is no “going back to what was or withdrawing into national shells.”

While the crisis has upended the world, it has also created the space for something new, he said.

For this anniversary year, the General Assembly has asked the Secretary-General to report on a common agenda for the future, which he will do next year.

“The pandemic has taught us our choices matter”, said Mr. Guterres.  “As we look to the future, let us make sure we choose wisely.”

Earlier in his speech, the Secretary-General spoke of the UN’s comprehensive response throughout the pandemic.

The UN system, led by the World Health Organization (WHO), has assisted governments, particularly in the developing world, including through providing personal protective equipment and other medical supplies to more than 130 countries.

The Organization also launched the ‘Verified’ campaign to fight the “toxic virus” of misinformation surrounding COVID-19. It is also supporting efforts to develop a fair and equitable vaccine against the actual coronavirus, as well as treatments and therapies.

However, Mr. Guterres warned against what he called “vaccinationalism”, as countries are reportedly making “side deals” for their own populations.  He underlined that “None of us is safe, until all of us are safe.”

The UN has also pushed for a “massive” rescue package, equivalent to roughly 10 per cent of global economic output, to get economies back up and running.  Developed countries can afford it, he said.

“But we need to ensure that the developing world does not fall into financial ruin, escalating poverty and debt crises,” he stated. “We need a collective commitment to avoid a downward spiral.”

To this end, the Secretary-General will convene world leaders for a meeting next Tuesday to find solutions to finance development in the COVID-19 era and beyond.

♦ Receive daily updates directly in your inbox - Subscribe here to a topic.
♦ Download the UN News app for your iOS or Android devices.
General Assembly|UNGA75|COVID-19