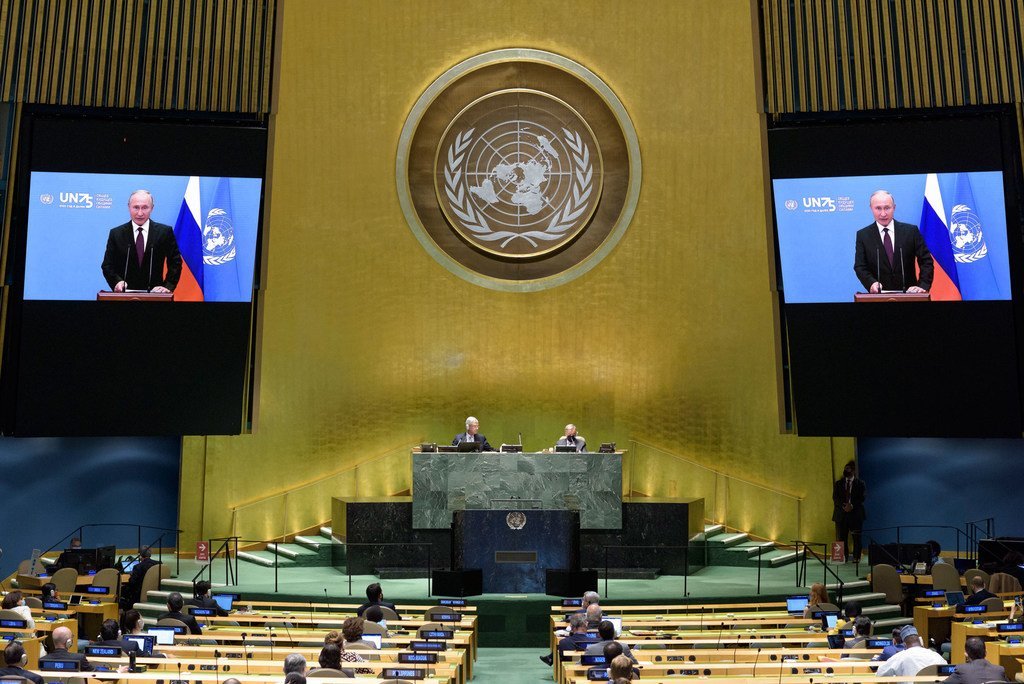 Addressing the General Assembly’s annual high-level debate, Russian President Vladimir Putin on Tuesday called on the international community to strengthen cooperation on a range of pressing issues and praised the UN’s successes, particularly through adherence to the world body’s Charter, in ensuring the post-war peace.

He called for reflection on the intangible principles of the Charter: the sovereign equality of States, non-interference in their internal affairs, the right of peoples to determine their own future, the non-use of force or the threat of strength and peaceful settlement of disputes.

Taking stock of the past 75 years, Mr. Putin said that, despite all the difficulties and geopolitical changes that have occurred, the UN has “competently fulfilled its mission" to protect peace and promote sustainable development.

He saw in “this enormous potential and this expertise of the United Nations” a solid basis for moving forward. At the same time, he said that the Organization should “not stiffen” but evolve in accordance with the dynamics of the 21st century and adapt to the reality of a modern world that is increasingly complicated, multipolar and multidimensional.

Mr. Putin acknowledged that the current state of global affairs is having an effect on “the principal organ of the United Nations, the Security Council.” For Russia, the Council should be more inclusive of the interests of all countries, as well as the diversity of their positions, and it must base its work on the principle of the broadest possible consensus.

But at the same time, it must continue to be the cornerstone of global governance and this, he argued, can only be achieved if its permanent members retain their veto power. For Mr. Putin, the law of the five nuclear powers, the winners of World War II, “remains indicative of the current military and political balance to this day.”

The Council, he stated, “helps to prevent unilateral actions that could lead to a direct military confrontation” between the main states, and provides an opportunity to seek a compromise or at least avoid solutions that would be totally unacceptable to others and” act within the framework of international law, rather than in a gray area of arbitrariness and illegitimacy.

Forgetting the lessons of history was “extremely irresponsible,” he said, akin to attempts to arbitrarily interpret the reasons, course and results of World War II, to alter the decisions of the Allied conferences and the Nuremberg Tribunal.

“This is a direct, destructive blow to the very foundations of the post-war world order, which is especially dangerous in conditions when global stability is undergoing serious tests [...], the threats posed by terrorism, organized crime and drug trafficking are exacerbated.”

Turning to the COVID-19 pandemic, Mr. Putin noted that, while experts had not yet fully assessed the extent of the social and economic shock, it was obvious that it will take time to restore the world economy. “We will need new innovative solutions,” said the President, for whom the only way to develop such solutions is to work together.

The pandemic, the Russian leader continued, has highlighted a series of ethical, technological and humanitarian problems. He hoped that the United Nations would discuss issues related to cybersecurity and the use of advanced digital technologies very seriously.

As with the economy, “we must now remove the obstacles to partnerships,” he said, and the Russian Federation was actively contributing to global efforts to fight COVID-19, while taking into account the “central coordinating role of WHO”.

“Russia is convinced that now it is necessary to use all the capacities of the global pharmaceutical industry in order to provide free access to vaccinations for citizens of all states in the foreseeable future,” he stressed.

Mr. Putin noted that Russia is fully prepared to supply other countries with “the world's first vaccine, 'Sputnik-V', which has been shown to be reliable, safe and effective.” He offered to “provide our vaccine free of charge to UN staff and its offices.”

♦ Receive daily updates directly in your inbox - Subscribe here to a topic.
♦ Download the UN News app for your iOS or Android devices.
UNGA75|Russia|General Assembly