The 75th session of the UN General Assembly opened on Tuesday with a moment of silence against the unprecedented backdrop of the COVID pandemic, as the new president told delegates that the coronavirus had driven home the value of multilateralism “to address our collective challenges”.

“The context in which we are working, serves to remind us of the necessity of the multilateralism system”, Volkan Bozkir told delegates sitting distanced apart in the gilded hall at New York Headquarters.

He expressed that it was a deep honour to be hosting the session, noting the importance of meeting in person, “so long as health conditions allow”, and affirmed his intension to convene face-to-face meetings as much as possible.

It’s my first day as President of #UNGA75 &amp; my focus is on making our multilateral system more effective. I will work to drive global cooperation &amp; deliver solutions to the people we serve. pic.twitter.com/mGOyJUHJMZ

While taking the mitigation measures needed to protect the health and safety of delegates and staff,  the UN official upheld that in the "business of diplomacy, there is no substitute to meeting counterparts face-to-face, to build long-term understanding of each other’s positions and forge compromise”.

Mr. Bozkir told the plenary that next week the General Debate would be addressed by more Heads of State than ever before.

He asserted that two weeks of crucial High-level meetings, “will guide our work for the session” and expressed confidence that their impact “will not be compromised by the circumstances”.

The newly minted Assembly president promised to do his “utmost to support and lead” the high-level meetings to commemorate the 75th anniversary of the UN; the 25th anniversary of the Fourth World Conference on Women; a high-level commemoration to promote the International Day for the Total Elimination of Nuclear Weapons; and the Biodiversity Summit.

“During the 75th session, we will hold two General Assembly Special Sessions”, he informed the plenary, “one on COVID-19 – the first Special Session convened to discuss a pandemic – and the second against corruption”.

Mr. Bozkir also set out a list of priorities for his tenure, which include reviewing the UN Global Counter-Terrorism Strategy, commemorating the 25th anniversary of the World Summit for Social Development, and preparing for the Fifth UN Conference on Least Developed Countries.

There will also be a high-level meeting on water-related goals and targets of the 2030 Agenda  and Oceans Conference, together with revitalizing the work of the Assembly, and discussions over Security Council reform.

“I will also work with you to successfully implement the various mandates entrusted to me”, he assured.

“This year will be a critical one in the life of our Organization”, he said. “We must continue to respond to the immediate impact of the COVID-19 pandemic by strengthening health systems and supporting the development and equitable distribution of treatments and vaccines”.

The UN chief highlighted the need to build a strong recovery, based on the 2030 Agenda and the Paris Agreement,  while continuing the Assembly’s work across the full range of global challenges ahead, including peace and security, disarmament, human rights, gender equality, and sustainable development.

Three-quarters of a century

Marking the 75th anniversary milestone, Mr. Guterres observed that the world has high expectations of the UN as the main multilateral platform in a rules-based international system.

“The nature of multilateralism is changing, and I have frequently pointed to the need for a more networked and inclusive multilateralism for the 21st century”, he flagged, welcoming the Assembly’s pledge “to work towards consolidating trust and cohesion” among Member States, major groups of countries, and other international organizations.

In closing, the Secretary-General said he looked forward to working closely with the Assembly president during the 75th Session, “to address our shared objectives” and offered the cooperation and support of “the entire Secretariat”.

“I wish you a very successful mandate”, he concluded. 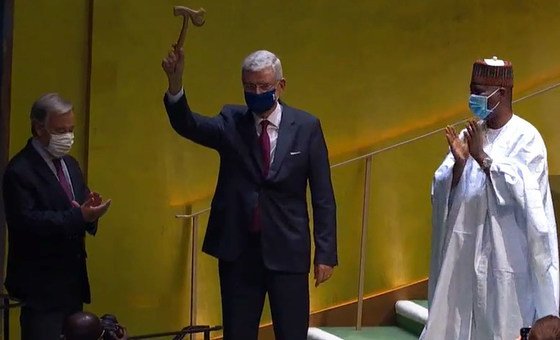 Outgoing President Tijjani Muhammad-Bande finished off his extraordinary year in office, having to steer the 74th session through the beginning of the pandemic, by paying tribute to former Secretary-General Javier Pérez de Cuélla, and Burundi President Pierre Nkurunziza – both of whom passed away in 2020.

“We started this session guided by the hopes and aspirations of the people we serve”, he said, noting that the Assembly has made “great strides” in  galvanizing multilateral efforts to tackle poverty eradication and zero hunger, quality education, climate action, and inclusion.

Mr. Muhammad-Bande pointed out that the first High-level Meeting of the Assembly focused on global health, before anyone knew that the year would be defined by a pandemic.

“The emergence of the novel corona virus (COVID-19) has shown that we have to continue to deepen multilateral cooperation in the health sector”, including scaling up national and global efforts “to build a healthier world for all”, he asserted.

He expressed gratitude that, at the onset of the pandemic, Member States adopted two decisions that allowed more than 70 resolutions to be passed, and the Chairs of the Main Committees for the 75th session to be elected.

Underscoring the importance of the Assembly, he recalled that it was “founded upon equality of voice and vote” and its resolutions reflect the “aspirations of humanity”.

“This is a moment of reckoning for our shared planet and future…a time for action, ambition, equality, inclusion, and partnership”, Mr. Muhammad-Bande said, stressing the need to keep youth engaged in the Organization’s work.

It is only in doing so can the world be “certain of peace, justice and development”, he endorsed.

“We must continue to thoughtfully define our actions and uphold our pledge to leave no one behind, even in the face of disagreement”, he said, bowing out of office gracefully. “Indeed, in spite of disagreement, we must practice empathy and choose unity over discord”. 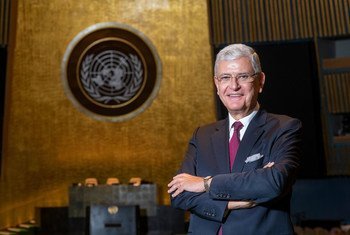 INTERVIEW: The top diplomat shepherding the General Assembly through its 75th year

The Turkish diplomat elected to be the president of the 75th session of the UN General Assembly, Volkan Bozkir, is taking on the role as the Organization grapples with an unprecedented pandemic, and questions surrounding the future direction it should take. 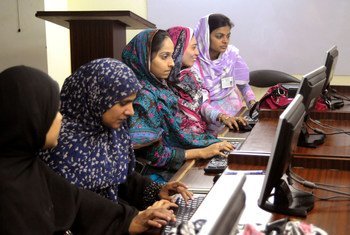 Throughout the COVID-19 pandemic, the General Assembly has worked hard, under “extraordinary circumstances” to uphold its vital mandates, perform essential services, and ensure continuity in the name of the people the Organization serves, the president of the UN body said on Tuesday.