WFP/Karolyn Ureña
A woman in the Dominican Republic receives food from a Government soup kitchen set up to help fight hunger triggered by the COVID-19 pandemic.
16 June 2020
Humanitarian Aid

The study by the UN’s office for the region, known by the acronym ECLAC, and the Food and Agriculture Organization (FAO), proposes 10 measures to ward against increased hunger, including through an “anti-hunger grant” to support vulnerable people as well as food producers.

Agriculture itself will not be so affected by the pandemic. What is more affected is the household income. That's why we're concerned about the increase in extreme #poverty in #LAC. That's why we must insist on emergency admission and the Bonus Against Hunger: @aliciabarcena pic.twitter.com/5Df02TAspK

“In Latin America, we may have a historic setback in the fight against hunger. In a matter of months, we may lose what we have achieved in fifteen years. Millions of people may end up going hungry. That is the gravity of the current problem”, said Julio Berdegué, FAO’s Regional Representative.

Fear of a food crisis

In English, the report is entitled Preventing the COVID-19 crisis from becoming a food crisis: Urgent measures against hunger in Latin America and the Caribbean.

The agencies said the pandemic follows seven years of slow economic growth in Latin America and the Caribbean, and could result in the biggest drop in regional Gross Domestic Product (GDP) in a century; a decline of -5.3 per cent.

This will push an additional 16 million more people into extreme poverty this year, in a region where nearly 54 million people were already experiencing severe food insecurity.

COVID-19 is also affecting food systems, with domestic food prices rising higher than other basic items. Increased unemployment means millions are unable to buy enough to eat, while many others are forced to find cheaper food that is less nutritious.

“The major task we have ahead of us is to keep the health crisis from turning into a food crisis. That is why we are proposing complementing the Emergency Basic Income (EBI) with the provision of an Anti-Hunger Grant (AHG),” said Alicia Bárcena, ECLAC’s Executive Secretary.

The report recommends that the Anti-Hunger Grant could be given for six months to people living in extreme poverty.

The grant could be in the form of cash transfers, food baskets or vouchers, equivalent to 70 per cent of the regional extreme poverty line, or just under US $50 dollars per month, with an estimated overall cost of $23.5 billion.

The two UN agencies further propose that food producers should receive an increase of at least 20 per cent in the average credit portfolio from the last three years, for loans that would be financed by a special credit line from multilateral and development banks. Family farms should also receive a basic investment kit of $250, at a regional cost of roughly $1.7 billion.

The Anti-Hunger Grant is included in a series of 10 measures aimed at ensuring all households have access to the nutritious food they need, food companies can continue to carry out their work, and countries have enough food to guarantee supply at reasonable prices.

Meanwhile, the World Food Programme (WFP) is calling for greater international solidarity to defeat COVID-19 in Latin America and the Caribbean and to protect the most vulnerable countries and communities.

WFP also warns against a “hunger pandemic” in a region where COVID-19 cases continue to rise, doubling to 1.6 million in the last week alone, according to the UN agency.

The warning applies to countries where WFP has a presence, such as Colombia, Honduras and Haiti, regional Director Miguel Barreto told journalists via videoconference on Tuesday. WFP does not operate in Argentina, Brazil, Chile, Mexico and Venezuela.

“Our projection paints a stark picture. Our region already has problems related to economic and climate shocks, as well as insecurity and displacement. Another issue is that between 50 and 70 per cent of workers do so in the informal sector, making them more vulnerable because they cannot access to work due to lockdown in most of the countries of the region,” he said.

Stepping up social support and solidarity

“We recommend governments expand their programmes to include more vulnerable people and groups, like informal workers and migrants,” he added.

WFP has so far dispatched nearly 70 metric tonnes of supplies to 27 countries in the region via its humanitarian hub in Panama.

More cargo flights from its international hub in China are expected in the coming days.

“At a time when we are seeing the virus devastate our region, this support is absolutely crucial for people on the frontlines of the pandemic, and we look forward to the arrival of more supplies in the coming days and weeks,” he said.

♦ Receive daily updates directly in your inbox - Subscribe here to a topic.
♦ Download the UN News app for your iOS or Android devices.
eclac|FAO|WFP|Latin America and Caribbean|hunger|COVID-19|coronavirus 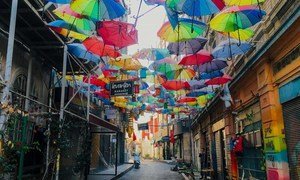 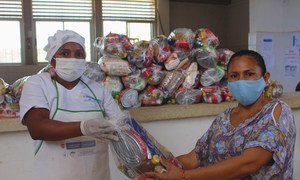 Some 14 million people in Latin America and the Caribbean could experience severe food insecurity this year due to the COVID-19 pandemic, according to projections released on Thursday by the World Food Programme (WFP).