UNAMA/Haqmal Masoodzai
Afghans gather to vote in the presidential election at polling stations in Paktya, the capital city of Gardez province in the southeastern region. (Septermber 2019)
22 December 2019
Peace and Security

Welcoming the preliminary results for Afghanistan’s presidential election on Sunday, the head of the United Nations mission in the country urged the authorities and all actors to “protect the integrity of the final stage of the process.”

Afghanistan “braved security threats” in September to cast their votes in the country's presidential ballot for a better future, Tadamichi Yamamoto, head of the UN Assistance Mission in Afghanistan (UNAMA), said on Sunday, urging everyone to “safeguard and complete the election”.

“Those voters deserve to be commended for carrying out their civic duty,” stressed Mr. Yamamoto, who is also the Secretary-General’s Special Representative for the country.

“Any decisions taken by the electoral management bodies in the final stage of the process must have clear legal and technical justifications and should be explained to the people of Afghanistan in clear terms.”, he spelled out.

According to the preliminary results, President Ashraf Ghani won a slim majority of votes after a poll marred by allegations of fraud plunged the country into a political crisis.

News reports highlighted that Afghanistan could split further along tribal and ethnic lines without a unifying leader accepted by all sides and also pointed out that the result came at a critical juncture as the United States is showing a keen interest in negotiating a peace settlement with the Taliban to end an 18-year-long war.

The UN underscored the importance of an orderly, careful process leading up to the final results and reiterated that the election process is a joint responsibility, including by the electoral management bodies and candidates, as well as media and civil society.

“All candidates have the chance to raise any concerns they may have through the appropriate mechanism and within the prescribed time, in accordance with the relevant legal frameworks, regulations and procedures,” the UNAMA chief stated.

At the same time, he upheld that Afghanistan's Election Complaints Commission (ECC) “has an obligation to adjudicate any complaints it receives transparently and thoroughly so the election process may conclude in a credible manner.”

UNAMA will continue working to support Afghanistan’s electoral authorities, fight fraud and provide impartial and expert advice toward a transparent and credible election process based on rule of law.

On Monday Mr. Yamamoto told the Security Council that when credibility completed the election will “become a milestone in the history of establishing a representative political system of the country”.

♦ Receive daily updates directly in your inbox - Subscribe here to a topic.
♦ Download the UN News app for your iOS or Android devices.
Afghanistan|unama|election 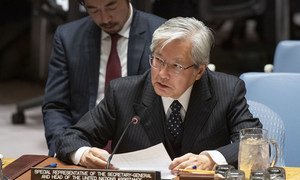 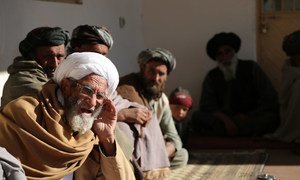