It’s 7pm at Swirl wine bar in the Faubourg St John neighborhood of New Orleans a wine tasting is underway.  Some 300 different wines from all over the world, but with an emphasis on Italy and France, are stacked in wooden racks around the small but bustling wine bar-cum store. The Swirl staff circulate and discuss grape types, vintages and regional growing variations with customers.

Beth Ribblett set up the business almost 14 years ago. “My work means making sure my customers are enjoying themselves and I also get great satisfaction from educating people about the wine we are serving”, she told UN News on a visit to Swirl. “I want them to know where it’s from and the story behind the wine. This is one of the most important things we do. Is I always want to be learning, and educating customers helps me to do this.”

Ask any bar or restaurant owner in the United States and they will tell you it’s a hard business to make a success of and Beth Ribblett says it’s especially difficult for women. “The catering industry is male dominated from chef to sommelier, so it can be tough for women.”

And she says that women continue to be treated badly. “I am sad to hear stories of men taking advantage of young women and I hate that this is still part of our business.  I am upset that women feel they have to put up with this behavior or somehow ignore it in order to make progress,” adding that her advice to young women is “to be knowledgeable, trust that knowledge and be confident if challenged.”

Five miles south of Swirl, another woman is hard at work in another industry traditionally dominated by men. Kai Bussant is a milliner, a maker of hats, as well as an all-round designer, who is currently employed by the hatmakers, Goorin Bros, to restore and refurbish hats.

“Historically, millinery has been male-dominated, but I don’t believe customers are concerned about a woman working on their hat,” she told UN News.” As a woman, when I’m dealing with customers, I like to be inclusive and comforting and explain the process and timeline.”

"Family and community and the creation of culture is very important to me. For this collaboration and having people who believe in you is very important. - Kai Bussant talks about her job as a milliner in New Orleans for the @ilo4USA photo project. pic.twitter.com/uOnWe2WHMG

She brushes down a grey women’s fedora she has been working on and adds: “there is a poetic process of designing or bringing a hat back to life as well as an exacting attention to detail, and maybe women can offer something different.”

Both Kai Bussant and Beth Ribblett are thriving in their respective fields, and it’s hoped their success stories can be replicated in other industries not just in the US but globally. The UN’s specialized agency for work-related issues, the International Labour Organization (ILO), is aiming to create more opportunities for women by promoting gender equality in workforces worldwide.

Both women have participated in an ILO photography project called “Dignity at Work: The American Experience.” The project launched to mark the organization’s centenary in 2019 documents the working life of people across the United States. Kevin Cassidy, the Director of the ILO’s office for the United States believes change is happening: “The people I have met as I have criss-crossed the United States with this project are telling me there is a sea-change in terms of gender equality and the understanding of women’s role in society, although this has been happening slowly. We do need more women in the workforce and these women, young and old, are role models for others, showing they can have successful careers.”

And he adds, “that women at work suffer from a lack of confidence not competency. Some recent research shows that when women apply to jobs they need 100 per cent confidence they can do the job, for men they only need to believe they can do 50-60 per cent of the job before applying.”

The ILO is taking a “proactive role” according to Kevin Cassidy in reducing the barriers for women to succeed at work. In June 2019, the organization passed a convention, a legally binding international treaty that may be ratified by member states, on violence and harassment in the workplace, which is one of the key barriers preventing women from entering the workforce. The ILO has also agreed a convention on domestic workers which will provide women, especially those who are migrant workers, with protection at work.

Listen here to an interview by Kevin Cassidy with Michelle Gueydan, a sommelier who consults for Swirl:

Back at Swirl wine bar the wine tasting event is coming to an end and customers are finishing off reds, whites and rosés. It’s been a long day for owner Beth Ribblett and her team pouring and explaining with the confidence borne of their in-depth knowledge, the stories behind each wine they have served.

♦ Receive daily updates directly in your inbox - Subscribe here to a topic.
♦ Download the UN News app for your iOS or Android devices.
Dignity at Work|workers rights|women|business|GENDER EQUALITY 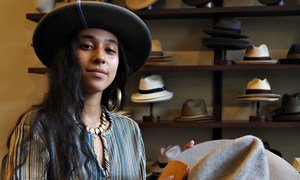 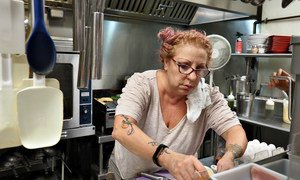