Roseann Rostoker moved to New Orleans in 2010 to open the Red Gravy café. According to some estimates, women make up just 20 per cent of chefs working in the United States.

“I always wanted to run a restaurant since the age of 10-years-old. While other kids were watching Bugs Bunny cartoons on TV, I was watching cooking programmes. When my mom went out to work, I was responsible for watching my younger sister and getting dinner started. I loved that. I could make a brown gravy better than my mother, even though I didn’t really know what I was doing. It got to the point that I was giving her the shopping list, so I could cook dinner.

ILO Photo/John Isaac
Roseann Rostoker is the chef and owner of the Red Gravy restaurant in New Orleans.

I knew I wanted to be a chef when I was 14, but my parents did not let me go to cooking school. They said it was no job for a woman. When it was time to go to university, I asked again, but my mom insisted I went to the university where she taught, as I could go for free. We were a blue collar [working class] family and would have had to pay for cooking school.

It’s important for women to be themselves and not what others expect them to be and to believe they will get it right, if not every time, then most times. - Roseann Rostoker

I went to university for a semester and a half and then dropped out. I worked at a newspaper selling classifies ads, got married and then had children. Once my kids were older, I got my first job as a professional cook in a corporate kitchen. I lied in the entire resumé, I just needed to get my foot in the door. There was a female chef, who maybe wanted to give me a chance and within six months I was her sous-chef, so I pulled it off.

What we do in the kitchen is a labour of love; if I get a bad review, I take it personally. Some days, I wake up and say, “I don’t want to play restaurant today”, but customers don’t care how I feel; they want their meat ball or omelet. My job is to give it to them. But, I do have freedom as I am my own boss.

Listen to a discussion between Roseann Rostoker and Kevin Cassidy, the Director of the ILO’s office for the United States at the Red Gravy :

To run a successful restaurant, you need humility, a sense of humour and patience, because no-one is ever going to do something exactly the way I want it to be done.

Many people still believe that the catering industry is a man’s world, but it is becoming easier as a woman if you run your own business. However, if you are not in charge, you are still at risk of sexual advances and abuse. In my kitchen, I immediately put a stop to any language which I think is inappropriate.

Women bring a different sensibility to cooking as when they cook it is like love, whilst men cook as a critical profession. It’s important for women to be themselves and not what others expect them to be and to believe they will get it right, if not every time, then most times.” 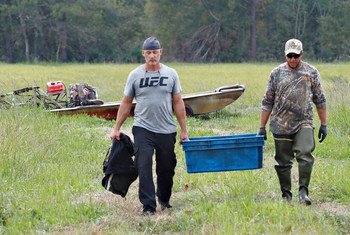 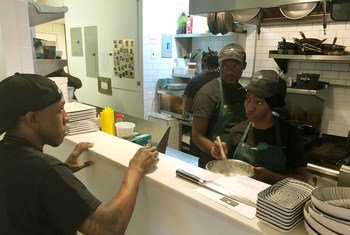