© UNICEF/Thomas Nybo
A nurse prepares to vaccinate an infant during a regularly-scheduled immunization clinic in North Kivu province, Democratic Republic of the Congo.
27 November 2019
Health

More than 5,000 people, including 4,500 children under the age of five, have died from measles in the Democratic Republic of the Congo so far this year - @UNICEFDRC https://t.co/3gO0fX38hV

Violence and insecurity, lack of access to healthcare and vaccine and medical kit shortages in the worst-affected areas, have rendered thousands of children unprotected and hindered efforts to stop the deadly disease from spreading.

“Cultural beliefs and traditional healthcare practices also often get in the way of vaccinating children against measles and treating those with symptoms”, he explained.

The World Health Organization (WHO) said that measles, which has gripped all provinces in the country, is the world's largest and fastest-moving epidemic.

While a safe, effective and affordable vaccine can prevent the disease, Mr. Beigbeder stressed that “the key is to reach every single child, no matter where they are”.

WHO maintains that responding to measles requires a range of approaches to ensure that all children get their vaccines on time. This requires effective communication and engagement on their critical importance as well as the dangers of the disease.

UNICEF and its partners are not only conducting measles vaccination campaigns in the worst-affected areas, but also supplying clinics with medicine to treat the disease.

So far, they have distributed 1,317 medical measles kits – containing antibiotics, rehydration salts, Vitamin A and other medicines – to affected health zones to treat children with complications.

“Yet these measures can only ever be a short-term solution, as significant investment in strengthening DRC’s national vaccination programme and wider health care systems is crucial to guarantee the health and wellbeing of the country’s children”, the UNICEF representative underscored.

WHO flagged that measles is a virus which typically begins with a high fever. It’s the complications associated with the highly contagious disease, including pneumonia and encephalitis, which are responsible for most measles-related deaths.

According to the UN health agency, severe cases are more likely to occur among young children who are malnourished or have insufficient food, especially those with a vitamin A deficiency, or whose immune systems have been weakened by HIV/AIDS or other diseases.

♦ Receive daily updates directly in your inbox - Subscribe here to a topic.
♦ Download the UN News app for your iOS or Android devices.
DR Congo|DRC|measles 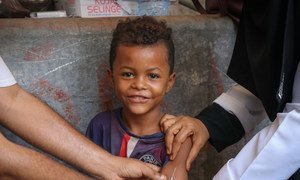 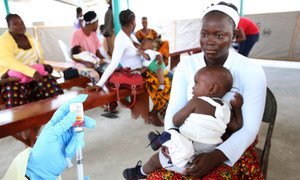