UNICEF/Jimmy Adriko
A health worker takes the temperature of a man as people from the Democratic Republic of the Congo line up at a screening facility set up at point of entry at a Uganda-DRC border town. Medical staff routinely check people who enter Uganda from the DRC for Ebola symptoms. (12 February 2019)
19 July 2019
Health

Ebola virus is just one challenge among many facing communities in the Democratic Republic of the Congo (DRC), the World Health Organization (WHO) said on Friday, reiterating an appeal for the international community to show support and solidarity for its people.

#Ebola: "Support #DRC and do not panic" — Dr. Margaret Harris from @WHO briefed journalists in @UNGeneva today on the international public health emergency decision and on the case of the fisherwoman from #DRC who was infected and later died from Ebola. pic.twitter.com/FfuRHh4r3P

According to WHO, more than 2,000 people have died from measles in 2019, while the Ebola outbreak which began last August in Ituri and Nord Kivu provinces has claimed 1,705 lives.

Measles ‘a bigger problem than Ebola’

“They see it as a bigger problem than Ebola”, she said. “It’s not top of their agenda; they’d like good roads, they’d like clean water, they’d like to know their children can reach their fifth birthday and not die from measles.”

In addition to measles and malaria and a lack of basic services, since early June, more than 300,000 people in the resource-rich Ebola-hit provinces of Ituri and North Kivu on the eastern side of the country bordering Uganda and Rwanda, have been displaced by violence linked to armed groups, according to UN humanitarian coordination agency, OCHA.

Dr. Harris expressed optimism that the global attention generated by the decision earlier this week to classify the outbreak an international public health emergency, might focus attention on securing a more peaceful and sustainable future for DRC’s struggling communities.

Listen to or download  the full interview with Dr. Harris from the World Health Organization, on SoundCloud:

‘Do not shut borders or put travel restrictions on DRC’

“Essentially for the rest of the world, the main recommendation is: support DRC and don’t panic,” she said. “Do not shut borders. Do not put on travel and trade restrictions. Do not panic.”

Noting that the expert panel which advised WHO to declare an international emergency was aware of the potential damage it could cause to DRC’s economy, Dr. Harris said that, so far, “the world’s been pretty good” at not shutting out the vast central African country.

Infected fish trader ‘did not travel to Rwanda’

Earlier, the WHO official confirmed that a fisherwoman from the DRC who was infected and later died from Ebola virus did not travel to Rwanda earlier this month, despite “conjecture” to the contrary.

She told journalists that the 22-year-old trader had travelled from Beni in DRC to a Ugandan market as she did “regularly”, but she was extremely ill and returned home from Uganda, reportedly dying four days later.

The incorrect information that she had visited Rwanda came from the Ugandan authorities before appearing on a WHO web page, Dr. Harris said.

“Conjecture turned into report; this was not accurate,” she said. “What’s really important to know - and we have checked thoroughly - this woman did not ever travel to Rwanda….She had end-stage Ebola and she was vomiting. So we are very, very concerned about everybody who came into contact with that woman at that time .”

Every month, an estimated 1,100 people cross the border from DRC into Rwanda, according to WHO, which remains positive that its contact tracing teams have ruled out any chance that the virus reached the DRC neighbour.

“We are absolutely certain, because what happened was, our team in (DRC’s) Beni…went across and talked to everybody and tracked it day by day,” Dr. Harris said. “Now, in her life, she may have gone to Rwanda. Everybody there is incredibly mobile, especially when it comes to trading, people are traders, they go all over the place. But the important thing is she did not spend any time in Rwanda while symptomatic. And as you know, Ebola is not transmitted until you are symptomatic.”

the Democratic Republic of the Congo|ebola|measles 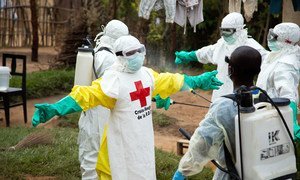 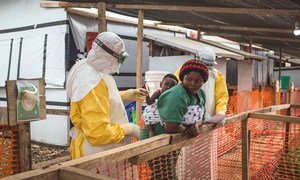