Mohamed Mahmoud Awad
Rimal neighborhood in the centre of Gaza City with smoke rising after 4 May 2019 Israeli airstrikes.
13 November 2019
Peace and Security

#UN Envoy @nmladenov on #Gaza & #Israel:
No justification for any attacks against civilians. Indiscriminate firing of rockets is unacceptable & must stop. The continuing escalation is very dangerous. UN is working to urgently de-escalate the situation. https://t.co/HMJh5MrBSv pic.twitter.com/Pi4bUmFndS

“I am very concerned about the ongoing and serious escalation between Palestinian Islamic Jihad and Israel”, Nickolay Mladenov said in a statement on Wednesday.

According to local reports, the attack not only killed the militant leader, but his wife and others.

Meanwhile, the Health Ministry in the Gaza enclave, which is controlled by militant group Hamas, reported on Wednesday that retaliatory airstrikes by Israel on Wednesday had killed 13 Palestinians, including three children, bringing the death toll to 23 since Tuesday.

“The indiscriminate launching of rockets and mortars against population centres is absolutely unacceptable and must stop immediately”, stressed the UN Special Coordinator. “There can be no justification for any attacks against civilians.”

Arguing that the continuing escalation is “very dangerous”, Mr. Mladenov maintained that it is “yet another attempt to undermine the efforts to improve the dire socio-economic conditions in Gaza and "another devastating conflict” must be prevented.

“The UN is working to urgently de-escalate the situation”, he concluded.

Israel Defense Forces (IDF) reported that more than 100 rockets had been fired into Israel during the two days of fighting, bringing the total to around 300, and news reports said around 50 people had been treated for injuries.

Palestinian Islamic Jihad reportedly confirmed that those killed in Gaza included members of its military wing.

♦ Receive daily updates directly in your inbox - Subscribe here to a topic.
♦ Download the UN News app for your iOS or Android devices.
Middle East|Israel-Palestine|Gaza 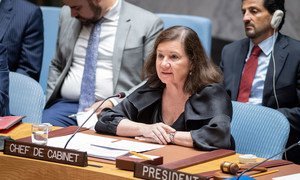