Although terrorists have become skilled at manipulating the Internet and other new technologies, artificial intelligence or AI, is a powerful tool in the fight against them, a top UN counter-terrorism official said this week at a high-level conference on strengthening international cooperation against the scourge.

Co-organized by Belarus and the United Nations Office of Counter-Terrorism (UNOCT), “Countering terrorism through innovative approaches and the use of new and emerging technologies” concluded on Wednesday in Minsk.

The Co-Chair’s Summary issued at the end of the @BelarusMFA & @UN_OCT Conference stresses the urgent need to strengthen international cooperation to tackle terrorist abuse of #NewTechnologies & share innovative approaches to counter this threathttps://t.co/55b4vVUq1Y#BY2019UN pic.twitter.com/upoSdkq0nx

But it also provides “live video broadcasting of brutal killings”, he continued, citing the recent attack in the New Zealand city of Christchurch, where dozens of Muslim worshippers were killed by a self-avowed white supremacist.

“This is done in order to spread fear and split society”, maintained the UNOCT chief, warning of more serious developments, such as attempts by terrorists to create home-made biological weapons.

He pointed out that terrorists have the capacity to use drones to deliver chemical, biological or radiological materials, which Mr. Voronkov said, “are even hard to imagine.”

But the international community is “not sitting idly by”, he stressed, noting that developments in this area allow the processing and identification of key information, which can counter terrorist operations with lightning speed.

“The Internet content of terrorists is detected and deleted faster than ever”, elaborated the UNOCT chief. “Fifteen to twenty minutes is enough to detect and remove such content thanks to machine algorithms”.

Crediting quantum computing coupled with the use of AI, he explained that accelerated information processing enables terrorist tracing.

Mr. Voronkov added that the use of blockchain registration – a growing list of records, or blocks, that are linked using cryptography – is also being explored to identify companies and individuals responsible for financing terrorism.

“It is necessary to increase the exchange of expert knowledge on technologies such as 3D printing, synthetic biology, nanotechnology, robotics, the synthesis of the human face and autonomous weapons”, he underscored. “This will help to better identify and respond to risks before it is too late”.

The two-day conference was divided into three themed sessions that focused at global, regional and national levels on the misuse of new technologies and AI by terrorists; approaches and strategies to counteract terrorist propaganda; and the misuse of scientific innovations. 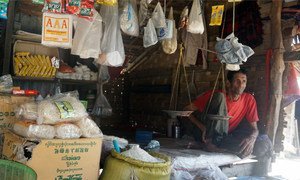 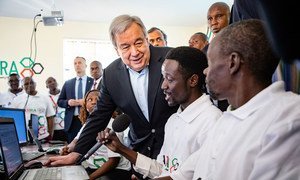