UNICEF/Sparks
Destruction in the Iraqi war-battered city of Mosul, evident after the city was liberated from ISIL forces in 2017.
11 February 2019
Peace and Security

“Despite the more concealed or locally embedded activities of ISIL cells, its central leadership retains an influence and maintains an intent to generate internationally-directed attacks and thereby still plays an important role in advancing the group’s objectives,” explained Vladimir Voronkov, who heads the UN Office of Counter-Terrorism (UNOCT).

“This is exacerbated by the challenge of foreign terrorist fighters who either are leaving conflict zones, or those who are returning or who are about to be released from prison. In this context, radicalization in prison settings, is seen as a particular challenge in Europe and Iraq,” Under-Secretary-General Voronkov added.

He said that so-called “frustrated travelers” were adding to the complexity of the threat, namely fighters who’d failed to reach main battlegrounds, but been diverted instead elsewhere, either by ISIL commanders or of their own volition.

The report notes that the “centre of gravity” of the organization, known in the Arab world as Da’esh, remains in Iraq and Syria, with up to 18,000 remaining in the ranks, including some 3,000 foreign fighters.

“In terms of ISIL’s financial strength, the report notes that despite some loss of revenue due to territorial setbacks, ISIL could sustain its operations through accessible reserves, in cash or investment in businesses, ranging between $50 and $300 million. ISIL cells are also reported to generate revenue through criminal activities”, explained Mr. Voronkov.

The document, the eighth report on ISIL – which proclaimed its so-called caliphate across northern Syria and Iraq in 2014 - was prepared on behalf of the UN Secretary-General by the Counter-Terrorism Committee Executive Directorate (CTED) and the Analytical Support and Sanctions Monitoring Team of the 1267/1989/2253 ISIL (Da’esh) and Al-Qaida Sanctions Committee, in close collaboration with the UNOCT and other UN entities and international organisations.

After being driven from its city strongholds of Mosul and Raqqa, intense fighting in recent months has left Da’esh defending a small enclave against US-backed fighters in eastern Syria, close to the Iraqi border. According to news reports, around 600 terrorist fighters continue to battle with coalition forces, which have labelled this the “final battle” to crush ISIL.

The UN analysis shows that Member States continue to face tremendous challenges across the world in tackling the threats posed by ISIL, with the threat level continuing to expand. This is especially true in North, West and East Africa as well as in Central Asia. Training camps have been identified in Afghanistan, and in South-East Asia, where women and youth are increasingly mobilized for terrorist operations across the region.

The head of CTED, Michele Coninsx, highlighted three of those major challenges faced by Member States:

The UN’s support to Member States

In the Lake Chad Basin, she said CTED and UNODC are working to provide Member States with technical expertise to develop comprehensive strategies to prosecute, rehabilitate and reintegrate persons associated with the Boko Haram extremist group.

Other initiatives include the development of a practical guide for requesting electronic evidence across borders, and the deployment of a specialized consultant to support Iraq in its efforts to develop a holistic and comprehensive counter-terrorism strategy.

“The Secretary-General has stressed that despite recent successes against ISIL / Da’esh and its affiliates, the threat posed by returning and relocating fighters, as well as from individuals inspired by them, remains high and has a global reach,” stressed Mr. Voronkov. “I would therefore emphasize, the recent ISIL losses should not lead to complacency at any level,” he concluded.

♦ Receive daily updates directly in your inbox - Subscribe here to a topic.
♦ Download the UN News app for your iOS or Android devices.
counter-terrorism|security council|CTED 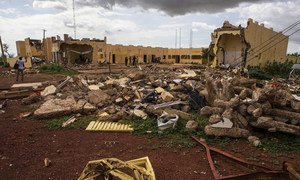