UN News/Nargiz Shekinskaya
A view of 'ground zero' at the Semipalatinsk Test Site in Kurchatov, Kazakhstan. Remote Semipalatinsk was once the Soviet Union's primary test area for nuclear weapons.

Moscow-400, Semipalatinsk-21, End of the Line, Kurchatov City  - all names for a top-secret town, built on the banks of the Irtysh River in the north-east of Kazakhstan, after the Second World War. Its inhabitants were mainly Soviet scientists and members of the military whose job it was to conduct nuclear tests.

To get inside Kurchatov City, which in the late 1940’s was surrounded by checkpoints, friends and family members of its residents would have to wait for months for permission. Getting outside the city, named after Soviet nuclear physicist Igor Kurchatov, wasn’t so easy either.

Yet, the town was stocked with the best food supplies. High-quality merchandise was delivered there, and top class amenities for the work and leisure pursuits of the 50,000 or so inhabitants.

Over a span of 40 years, 456 nuclear devices were exploded on the territory, which stretches across some 18,500 square meters, and the first iconic and chilling “mushroom cloud” rose over the test site near Semipalatinsk exactly 70 years ago, on August 29, 1949.

Inside the ‘testing ground,’ residents can recall ‘beautiful’ mushroom clouds

UN News/Nargiz Shekinskaya
Amir Kairanov was born and grew up near the testing site of Semipalatinsk in Kazakhstan and now works at the National Nuclear Center..

It takes about two hours to get from Semey - Semipalatinsk's official name since 2007 - to Kurchatov City, and it takes another hour by cross-country road to get from there to ‘ground zero’, the centre of the site.  In the Soviet era, a concrete road was constructed here for delivery of heavy loads, but it fell into disrepair and was never rebuilt.

Today, it's an immense, flat steppe overgrown with dry grass. Grim, triangular structures that were once topped with sensors, dot the territory, as a reminder of its past.

Yet, 70 years ago, everything here looked different: to study the effects of the nuclear explosions, the Soviet military built streets, erected bridges and even excavated a subway in the area. Animals used for testing were deliberately brought into the “impact zone.”

The locals readily share their memories: some describe the “horrible mushroom” cloud in a shaky voice, while the others say that it was “even beautiful”. Before each test, the military would go to the nearby villages and ask the inhabitants to go outside during the blast.

“My grandfather remembers how they exploded a hydrogen bomb in 1955, how he felt the blast wave and saw the light flash,” Amir Kayranov, told UN News. He is a young employee of the National Nuclear Center that was opened in Kurchatov City after the tests ceased.

UN News/Nargiz Shekinskaya
Amir Kairanov was born and grew up near the testing site of Semipalatinsk in Kazakhstan and now works at the National Nuclear Center..

At the time, not many people realized the dangers nuclear blasts posed. Even though Kazakh scientists have been conducting decontamination proceedures for almost 30 years, radiation levels here are still elevated, and children in the area continue to be born with genetic mutations. A local medical university has even amassed a horrific collection of infants born with abnormalities.

Nevertheless, no one says these problems are directly connected to the test site. Science likes precision, and the scientists don’t have numbers at their disposal. And that’s not just on the true number of mutations suffered.

“In the Semipalatinsk of Soviet era, one would hear about suicides all the time; people would take their own lives – by hanging themselves or jumping from a bridge, said Nurzhan Esenjolov, an employee of the Semey City Hall.

“There is no evidence that would prove a direct connection between those incidents and the nearby nuclear tests, but people in the villages got used to suicides that occurred quite often at the time,” he explained.

Tolkyn Bulegenov, Vice-President of the Semey Medical University, would only confirm an increase in contemporary oncology indices.

“In the zones adjacent to the test site, one can encounter malignant growths of the thyroid and blood malignancies – hematological blastoma, leukosis, lymphoma and chronic leukemia – 10 to 15 per cent more often than in other regions of Kazakhstan”, the medic told UN News.

According to Mr. Bulegenov, it is precisely these diseases that are connected to the prolonged exposure to radiation, and all the cases nowadays are meticulously tracked.

However, the information about the health of the people who were exposed to direct radiation during the operation of the Semipalatinsk Test Site, is under lock and key.

Mr. Bulegenov says that in the 1960s, a survey was conducted but “the results of the study remain classified up until today.” The official estimate is that, over 40 years, there were approximately one million people in the zone of radiation impact.

UN News/Nargiz Shekinskaya
In Kurchatov, Kazakhstan, the National Nuclear Center was created, where research and land reclamation are conducted.

When the test site was closed, Kazakhstan was faced with the question of how to decontaminate the land and what to do with the military-industrial complex that remained on the territory of the test site.

In order to solve this and other problems, the National Nuclear Center was founded in Kurchatov City. Employees of the Center conduct research and carried out ‘re-cultivation’, which requires the land to be plowed in such a way that the contaminated topsoil ends up on the bottom, and the uncontaminated soil rises to the surface.

Kazakhstan also came forward with a proposal to create the International Day against Nuclear Tests, to be observed in order to promote the dissemination of information about the consequences of such tests. August 29 is not only the date of the first test at Semipalatinsk; on this date in 1991 President Nursultan Nazarbayev signed the decree closing the test site, also known as the Polygon. 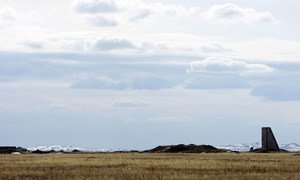 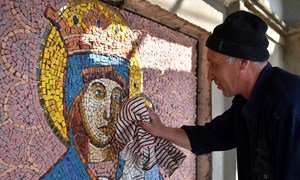