Sixty per cent of Homiel’s produce - comprising meat, dairy products and handicraft – are exported to neighboring regions and countries while the region attracted $17.7 billion worth of domestic and foreign Investment between 2011 and 2017, representing just over 15 percent of the country’s total direct investment during that period.

A ceremony marking International Chernobyl Disaster Remembrance Day was held at UN Headquarters in New York on Friday. While the Soviet Government only acknowledged the need for international help to mitigate the disaster in 1990, that same year the UN General Assembly adopted a resolution calling for more international cooperation.

A Chernobyl Trust Fund, managed now by the humanitarian affairs coordination office, OCHA, was created by the UN in 1991, and the UN Development Programme (UNDP) became involved in 2002, when the Organization announced a new focus on longterm development. The agency and its offices in the three countries affected, have taken the lead in that area, ever since.

“In the 33 years since that tragic night, there’s been a re-thinking of the way local populations in southeastern Belarus have handled themselves”, said Zachary Taylor, UNDP’s Deputy Resident Representative in Belarus. “Stigma is still pervasive, but the economic revival is visible. This is a fertile and productive region and its people are open, resilient and resourceful.”

“But let’s not rest on our laurels. There’s much more that needs to be done to bring the area back to its full potential. We need to keep investing in training, safety, long-term development planning, new technologies, including tourism and organic farming. This is an area that’s been left behind for too long. Let’s double our efforts to make sure it catches up,” said Mr. Taylor.

The disaster affected Belarus, Ukraine and Russia. Around 470 small towns and villages have been destroyed in Belarus alone, with 138,000 people unrooted from their homes.

The disaster still represents a huge financial burden. In Ukraine last year, 5 to 7 percent of the national budget was still dedicated to Chernobyl-related recovery activities. In Belarus, the overall economic loss is estimated at $235 billion. Missed profits and investment opportunities alone are estimated at $13.7 billion.

UNDP has been working with the rest of the UN system and international partners to help Chernobyl-affected areas in Belarus and Ukraine move from recovery and humanitarian support, to creating new jobs, strengthening social services, improving infrastructure, business and increasing investment opportunities. 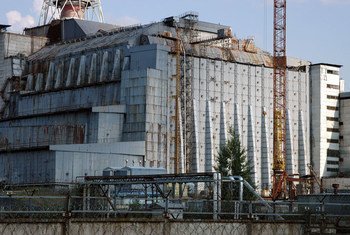 A quarter of all thyroid cancer cases among patients who were children at the time of the Chernobyl accident 32 years ago, are “probably” due to high doses of radiation received during and after the event, the United Nations body reviewing the effects of atomic radiation on human health and the environment has said.