“Decades of sustainable development gains can be wiped out overnight,” he lamented in Yokohama, citing the deadly cyclone streak in Mozambique earlier this year, floods that plagued Japan just days ago, and the wildfires presently ripping through the Amazon.

With July recorded as the hottest month ever, “We are on track for 2015-2019 to be the five hottest years since there are records. At the same time, the World Meteorological Organization has also shown that we have now the largest concentration of CO2 in the atmosphere of human history,” the UN chief told reporters.

As far as bearing the brunt, “The poor and vulnerable are the first to suffer,” he said, noting Africa is on the frontline of suffering consequences, yet contributes minimally to global warming.

“Our overarching goal is to raise ambition and get the world on track to limit global temperature rise to no more than 1.5 degrees Celsius”-- UN Secretary-General

“Africa has the moral authority on this,” he urged, and holds the right to ask top CO2 emitters like China, the United States and India, according the UN Environment Programme’s latest numbers,  to scale back on their emissions and comply with the scientific community’s recommendations for achieving carbon neutrality in 2050.

“Our overarching goal is to raise ambition and get the world on track to limit global temperature rise to no more than 1.5 degrees Celsius,” he said, citing the Intergovernmental Panel on Climate Change (IPCC), which found this target is only manageable by way of “rapid and far-reaching transitions.”

Mr. Guterres said with respect to the ongoing Amazon fires, the UN has taken steps to prioritize its resolve.

“We have been in contact with the countries to see whether, during the high-level session of the General Assembly, that would be a meeting devoted to the mobilization of support to the Amazon.”

On 23 September the UN chief will host a Climate Action Summit in New York, with proposals already put forward to protect the poor and vulnerable including boosts to disaster recovery and preparatory measures.

Limiting crises wrought by climate change requires we “not only respond more efficiently to disaster after it happens, but through advanced warning and preparation, we must work to prevent disaster from happening in the first place,” the Secretary-General said.

♦ Receive daily updates directly in your inbox - Subscribe here to a topic.
♦ Download the UN News app for your iOS or Android devices.
Africa|climate change 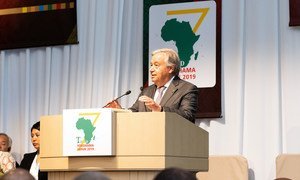 For Africa, ‘winds of hope are blowing ever stronger,’ Guterres declares at conference on development