© UNICEF/Patrick Brown
Children raise their hands to answer a question in class at a UNICEF learning space in Cox's Bazar, Bangladesh. (8 July 2019).

In a report marking two years since the arrival of around 745,000 Rohingya civilians in Bangladesh - after fleeing State-led persecution and violence in Myanmar - Executive Director Fore appealed for urgent investment in education and skills training.

“I would love to go to school because I could learn many things.” 12-year-old Mohsina lives in a refugee camp in Cox's Bazar, Bangladesh, where she takes care of her father after he was shot and lost his leg. She’s missing out on an education. #AChildIsAChild pic.twitter.com/cBy1BEuWBc

‘Mere survival is not enough’

“For the Rohingya children and youth now in Bangladesh, mere survival is not enough,” she said. “It is absolutely critical that they are provided with the quality learning and skills development that they need to guarantee their long-term future.”

Without adequate learning opportunities, youngsters can fall prey to drug dealers and traffickers who offer to smuggle “desperate” ethnic Rohingya out of Bangladesh, the UN report warned.

Women and girls face harassment and abuse especially at night, UNICEF noted, while adding that one of the agency’s objectives through education is to give teenagers the skills they need to deal avoid “many risks”, including early marriage for girls.

In addition to Bangladesh’s Kutupalong camp, which is home to some 630,000 people, hundreds of thousands more, have found shelter in another dozen or so camps in the Cox’s Bazar region close to the Myanmar border.

Living conditions are often described as perilous by UN humanitarians, including UNICEF, which have issued frequent alerts about the devastating effects of monsoon rains on flimsy bamboo and tarpaulin shelters.

Between 21 April and 18 July this year, refugee camp authorities recorded 42 injuries and 10 fatalities, including six children, because of monsoon weather, according to UNICEF.

For the Rohingya children and youth now in Bangladesh, mere survival is not enough - UNICEF chief Henrietta Fore

Amid huge needs - and with conditions still unsuitable for the return of ethnic Rohingya to Myanmar, according to the UN Refugee Agency (UNHCR) - basic public services have been provided in Cox’s Bazar, including health care, nutrition, water, sanitation and hygiene, under the leadership of Bangladesh.

“But as the refugee crisis drags on, children and young people are clamouring for more than survival; they want quality education that can provide a path to a more hopeful future,” the UNICEF report insists.

According to the agency, around 280,000 children aged four to 14, now receive educational support. Of this number, 192,000 of them are in 2,167 learning centres, but more than 25,000 children “are not attending any learning programmes”, the agency noted.

© UNICEF/Patrick Brown
A boy reads from his textbook in a camp in Cox's Bazar, Bangladesh. (2 July 2019)

More worrying still, nearly all 15 to 18-year-olds are “not attending any type of educational facility”, UNICEF said, before highlighting the case of one Kutupalong resident, Abdullah, 18.

“I studied six subjects back in Myanmar,” Abdullah says. “But when I arrived here, there was no way I could continue. If we do not get education in the camps, I think our situation is going to be dire.”

In an appeal to the Governments of Bangladesh and Myanmar, UNICEF and other agencies are calling for the use of national educational resources – curricula, training manuals and assessment methods – to help provide more structured learning for Rohingya children.

“Providing learning and training materials is a huge task and can only be realized with the full backing of a range of partners,” UNICEF chief Ms. Fore said. “But the hopes of a generation of children and adolescents are at stake. We cannot afford to fail them.” 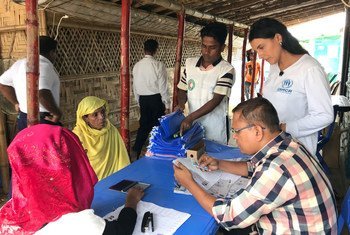 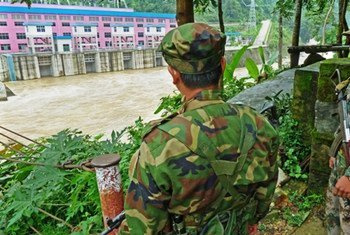