UNICEF/Brown
Newly arrived Rohingya refugees who came to Bangladesh by boat to Shah Porir Dwip, walk with their belongings to the refugee registration and aid distribution point at the Cyclone Centre in Teknaf, Cox's Bazar region.
13 March 2018
Migrants and Refugees

International crimes were committed against the Rohingya Muslims in Myanmar and those who fled the country could face further persecution if they return now, a senior United Nations official said Tuesday.

“Rohingya Muslims have been killed, tortured, raped, burnt alive and humiliated, solely because of who they are,” said Adama Dieng, UN Special Adviser on the Prevention of Genocide, following his visit to Bangladesh, where almost 700,000 Rohingyas from Myanmar had arrived in the space of just six months.

His visit from 7 to 13 March was to assess the situation of the Rohingya population who have crossed the border since the most recent violence in Myanmar’s northern Rakhine state in October 2016 and August 2017.

He visited refugee camps in Cox’s Bazaar, where survivors told horrifying stories of what they endured.

“All the information I have received indicates that the intent of the perpetrators was to cleanse northern Rakhine state of their existence, possibly even to destroy the Rohingya as such, which, if proven, would constitute the crime of genocide,” Mr. Dieng said.

The scorched earth campaign carried out by the Myanmar security forces since August 2017 against the Rohingya population was predictable and preventable. But the international community has buried its head in the sand.

“The scorched earth campaign carried out by the Myanmar security forces since August 2017 against the Rohingya population was predictable and preventable,” he stressed, noting that “the international community has buried its head in the sand” and failed to save the Rohingya from losing their lives, dignity and homes despite his numerous warnings of the risk of atrocity crimes.

Underscoring the need for the root causes of the problem to be addressed, Mr. Dieng said that “the Rohingya has been sealed since the day they were born” and that they must be given the opportunity that every human being should be afforded in life: to enjoy their fundamental human rights in freedom and safety.

He also said there must be accountability for the crimes that have been committed and the Rohingya must receive protection and support as refugees while in Bangladesh.

Mr. Dieng said that the majority of the Rohingya want to return to Myanmar, but only when they can do so in safety, dignity and with access to their basic rights.

“So far, the Myanmar authorities have shown no genuine efforts to allow this,” he said, noting that the international community also has a responsibility to protect this population from the risk of further atrocity crimes.

“Under the present conditions, returning to Myanmar will put the Rohingya population at risk of further crimes,” Mr. Dieng warned, stressing that, however, accepting the current status quo would be a victory for those who planned the attacks.

“We must not accept either of these scenarios,” he concluded.

♦ Receive daily updates directly in your inbox - Subscribe here to a topic.
♦ Download the UN News app for your iOS or Android devices.
Myanmar|Rohingya 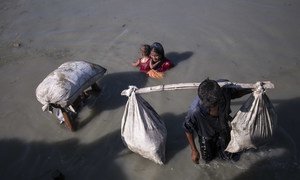 The “frenzied” scale of unspeakable violence against the minority Muslim Rohingya community in Myanmar has shifted to a “lower intensity campaign of terror and forced starvation,” seemingly intended to drive the remaining Rohingyas from their homeland, a senior United Nations human rights official has warned.