Caroline Gluck/UNHCR
Rohingya refugees in Kutupalong settlement in Cox's Bazar, Bangladesh, hold a sign demanding their repatriation to their homeland in Myanmar.

United Nations agencies and Myanmar have agreed a framework which it is hoped will lead to the repatriation of Rohingya refugees, but only if their “voluntary, safe, dignified and sustainable” return from camps in Bangladesh can be guaranteed.

Since the conditions are not yet conducive for return, this agreement to sign a Memorandum of Understanding (MoU) is being seen as a first and necessary step.

Since August last year, some 700,000 mainly-Muslim Rohingya have fled Rakhine State, in majority-Buddhist Myanmar, for neighbouring Bangladesh. Most say they were fleeing violence and persecution, including a military campaign by Myanmar forces, which began in response to violent attacks by Rohingya insurgents.

The agreement – reached by the Office of the UN High Commissioner for Refugees (UNHCR), the UN Development Programme (UNDP) and the Government of Myanmar – will be officially signed within a week or so, with the exact date to be confirmed.

Under the agreement, UNHCR and UNDP will be given access to Rakhine State, including to refugees’ places of origin and potential new settlement areas, that so far the UN has been unable to access since the violence escalated last August.

The access, once effective, will allow UNHCR to assess local conditions and help the refugees to make informed decisions on voluntary return.

The agreement will also allow the two UN agencies to carry out needs assessments in affected communities and strengthen the capacity of local authorities to support the voluntary repatriation process.

The Advisory Commission on Rakhine State – a neutral and impartial body composed of six local experts and three international experts, chaired by former UN Secretary-General Kofi Annan – has proposed concrete measures for improving the welfare of all people in Rakhine State.

Its recommendations include establishing a clear and voluntary pathway to citizenship and ensuring freedom of movement for all people there, irrespective of religion, ethnicity or citizenship status.

Meanwhile, the UN migration agency, known formally as the International Organization for Migration (IOM), is helping Rohingya refugees in Cox’s Bazar, Bangladesh, properly prepare for the monsoon season, which is getting underway.

Radios, megaphones, first aid kits, stretchers, protective clothing, warning flags and sirens are among the items being distributed to more than 500 Rohingya emergency volunteers in the largest camp there.

With most of the refugees forced to live on steep and sandy slopes in low-lying hills, surveys by IOM and other agencies have found that around 200,000 people will be in serious danger from landslides and serious flooding when the worst monsoon weather arrives. 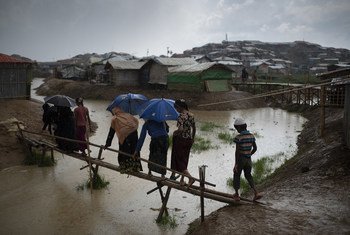