UNICEF/Thomas Nybo
A young boy in Bangladesh navigates a river swollen from days of monsoon rain. He is collecting plastic bottles washed into the river to sell to recyclers to help his family purchase food. (July 2019)
18 July 2019
Climate Change

"Millions of children have seen their lives turned upside down by the torrential rainfall, flooding and landslides," Jean Gough, UNICEF Regional Director for South Asia, said on Thursday.

This is the link between climate change and displacement. pic.twitter.com/WOBHFwAaxG

Estimates reveal that more than 12 million people have been affected so far. "As the rains continue, these numbers are only likely to grow," she added.

Damage to roads, bridges and railways has rendered many areas inaccessible, and children are in urgent need of clean water, hygiene supplies, food and safe play spaces in evacuation centres.

On the ground, UNICEF is working in close coordination with respective governments and humanitarian partners from the three countries to scale up its responses for affected children and their families.

In India, more than 10 million people have been affected in north-eastern states, including more than 4.3 million children. As the situation develops, these numbers are only likely to increase. While parts of the country have been suffering from heavy rainfall and flooding, other parts are still reeling from the aftermath of severe heat and water deficit, affecting almost half of the country.

In Bangladesh, monsoon rains continue to impact most of the country, particularly the central-northern and south-east regions, where more than two million people have been affected by flooding, including over 700,500 children. Estimates reveal that 367,340 houses have been damaged or destroyed and 1,865 schools affected by flood waters. Cox's Bazar in the south-east of the country, home to more than a million Rohingya refugees, has also been heavily hit.

While individual extreme weather events cannot specifically be attributed to climate change, said UNICEF, the increasing frequency and severity of extreme weather – including recent high temperatures, intense rains and slow-moving fronts – are in line with predictions of how human activity is influencing the global climate.

In addition to death and devastation, such events contribute to the increased spread of malnutrition, malaria and diarrhea, among other major killers.

"Across the region, we are seeing the devastating impact of extreme weather events on children and families,” warned Ms. Gough. "As weather events become more extreme, unpredictable and erratic, it is children who are paying the heaviest price.”

♦ Receive daily updates directly in your inbox - Subscribe here to a topic.
♦ Download the UN News app for your iOS or Android devices.
extreme weather|Bangladesh|South-East Asia 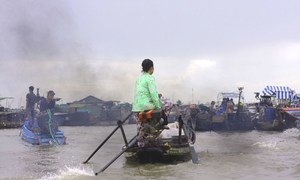 Unless progress is accelerated, Asia and the Pacific are on course to miss all of the 17 Goals of the UN’s 2030 Agenda for Sustainable Development, the Executive Secretary of the UN regional commission for Asia and the Pacific (ESCAP), told UN News at the Organization's Headquarters on Wednesday. 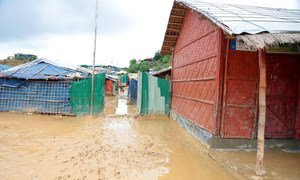