WFP/Gemma Snowdon
Days of heavy monsoon rains and wind have pounded the refugee camps in the Cox’s Bazar area of Bangladesh since 4 July 2019.

Since 4 July, heavy monsoon rains and wind have pounded the refugee camps in Bangladesh’s Cox’s Bazar, with deaths, displacement and major damage following in their wake, the World Food Programme (WFP) said on Friday.

“Those in the most vulnerable living situations have been relocated to safer, newly developed land in the camps”, WFP Spokesperson Herve Verhoosel told the regular news briefing in Geneva, noting that 5,600 people had been displaced.

Telling reporters that additional rainfall is forecasted for the weekend, he underscored that “the destruction is caused by the most significant weather event in over a year, and it was triggered by monsoon weather systems in the Bay of Bengal”.

Heavy rains have flooded parts of the world's largest refugee camp in #Bangladesh. Our engineers are working with the refugees to keep the camps safe and ensure that all families can continue to access life-saving food. pic.twitter.com/8knpC3fbK5

“Over 45,000 individuals have been affected by weather-related incidents since the end of April,” he said, noting that in July, WFP had provided rapid food assistance to thousands of refugees affected by monsoon rainfall, including cooked meals, high energy biscuits, and dry food, such as rice, lentil and oil.

While mud, water and traffic congestion has rendered camp movement on foot or in vehicles challenging, WFP has prepositioned emergency food supplies around the camps and is able to deliver assistance where it is needed most.

Currently, WFP has enough extra food in stock to feed the entire camp population of over 900,000 people for two weeks, if needed.

However, because heavy rains threaten potential landslides, WFP emergency teams are standing by in the camps to quickly respond if necessary, including overnight.

Considering the damage wrought by the heavy rains, it is easy to imagine the devastation that the Rohingya refugees may have faced if WFP teams had not, before the monsoon season, completed readiness projects, including cyclone disaster risk reduction and monsoon preparedness activities, camp condition improvements and expanded humanitarian access.

Almost two years after the 2017 influx of Rohingya refugees, the situation remains critical. Vulnerability to food insecurity prevails and would rapidly deteriorate if humanitarian assistance were decreased or discontinued.

At present, 80 per cent of refugees are entirely dependent on WFP food assistance, half of whom receive food distribution rations and the other half through e-vouchers, costing the UN agency $24 million monthly to feed almost 900,000 people.

“Without continued support from the international community the situation for these refugees would become increasingly dire,” concluded the WFP spokesperson. 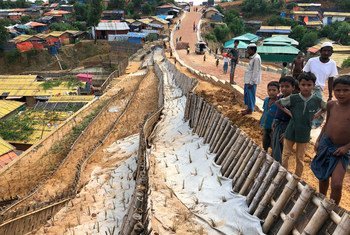 Heavy flooding and landslides in the Rohingya refugee camps of Cox’s Bazar in Bangladesh, has left thousands of children and families in an increasingly dire situation with critical infrastructure damaged or destroyed, the UN Children’s Fund (UNICEF) warned on Tuesday, while scaling up relief efforts to those vulnerable children. 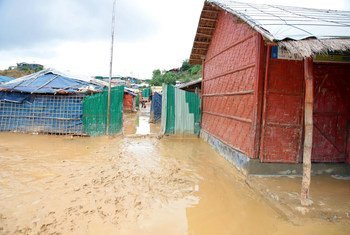