Cambodia: Giving back to UN peacekeeping

It’s an overcast morning, in South Sudan’s capital Juba, and growling thunder announces the start of some light rain. Standing in the drizzle in his military police uniform, is Colonel Channy Vongvannak, the commander of the Cambodian Force Military Police at the United Nations Mission in South Sudan (UNMISS).

He is inspecting a water purification plant within the Cambodian quarters where his troops process potable water for their daily use.

“Every day in our water treatment plant, we produce about 10,000 litres of clean, drinking water,” says Colonel Vongvannak, water which is available to all staff at the mission.

It’s not the responsibility of the Cambodian contingent to process the water for UN colleagues, but it is an indication of a cooperative and collegial approach to peacekeeping, which is born of a recent historical link.

“Cambodia received peacekeeping troops in 1993, and we feel that we have to contribute in the same way as other countries did when they worked in the UN mission in our country,” remembers Colonel Vongvannak. “So, we understand that countries and people suffer during conflict - and they need help.”

UN peacekeepers from around the world were deployed to Cambodia between February 1992 and September 1993 as part of the United Nations Transitional Authority in Cambodia (UNTAC) which was established to ensure implementation of a political settlement of the conflict in the south-east Asian country.

Cambodia has sent seven contingents to South Sudan. The Cambodian Military Police have been deploying to UNMISS since 2012. This is Colonel Vongvannak’s fourth rotation.

Colonel Vongvannak first deployed to South Sudan as Deputy Commanding Officer just before December 2013 when the country plunged into conflict as fighting erupted between rival factions.

Working around the clock during the conflict was normal according to Colonel Vongvannak. “During the crisis, we had been tasked to guard the perimeter of the protection of civilians camp 24 hours a day. This was a challenge because we are not trained to deal with civilians,” he said.

Working with other UNMISS contingents, “we provided internal security, we carried out search operations, cordoned off areas identified as dangerous, and where weapons were being smuggled.”

As the Colonel walks around the Cambodian compound, he encounters four military police officers or MPs who are on the way to inspect the cargo of troops leaving the country.

The MPs also monitor vehicle speeds within the UNMISS compound. Speed-guns, bright red cones, whistles, indicator sticks, radios and white gloves are the tell-tale signs that they are at work.

The MPs stop a few drivers exceeding the speed limit, and those not wearing seat-belts, who are politely reminded about traffic regulations. Sometimes, they also breathalyze staff who are suspected of driving under the influence of alcohol.

A colleague, Captain Mon Sinang adds, “we are not here to penalize, but to remind staff of their safety.”

Road accidents involving UN staff in Juba can increase with new arrivals who are unused to the general driving conditions in the city.

In addition to enforcing UNMISS traffic regulations, the MPs work to ensure law and order prevails amongst civilian and military and police personnel, conduct accident investigations and are sometimes called in to assist the mission’s Special Investigations Unit.

In addition to contributing to UN peacekeeping operations in South Sudan, Cambodia currently also has personnel deployed in UN missions in the Central African Republic, Mali, Lebanon and Abiyei. 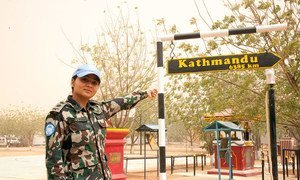 For over six decades, Nepalese women and men have served around the world as United Nations peacekeepers. The South Asian nation is currently the fifth largest contributor to UN peacekeeping, with over 5,700 personnel serving in more than a dozen countries. They protect vulnerable communities and support countries working to move from conflict to peace, doing so at great personal risk and in harsh conditions.