Speaking to young Māoris and people of the Pacific islands in New Zealand on Monday, UN Secretary-General António Guterres said “nature does not negotiate” and emphasized four key measures that Governments should prioritize in order to reach carbon neutrality by 2050.

#ClimateAction: The clock is ticking for Pacific islands.

Here are 4 shifts @UN chief @AntonioGuterres wants us to focus on:
1⃣Tax pollution, not people
2⃣No subsidies for fossil fuels
3⃣No new coal plants by 2020
4⃣Focus on a green economy

Acknowledging the role that youth needs to play in advancing climate action worldwide, he reminded the room of our common “central objective: not to have more than 1.5 degrees of increasing temperature at the end of the century. The international community, and especially the scientific community, has been very clear that to reach this goal we absolutely need to have carbon neutrality by 2050.”

For this, he called on nations worldwide to make four pivotal shifts:

The UN chief called for an emphasis to be placed on taxes on carbon emissions, known as “carbon pricing,” instead of being placed on salaries.

He stressed that taxpayer money should not be used to increase the frequency of hurricanes, the spread of drought and heatwaves, the melting of glaciers and the bleaching of corals.

Coal-based power is key according to UN-environment’s 2018 Emissions Gap Report: all plants currently in operation are committing the world to around 190 giga tonnes of CO2, and if all coal power plants currently under construction go into operation and run until the end of their technical lifetime, emissions will increase by another 150 giga tonnes, jeopardizing our ability to limit global warming by 2°C as agreed upon in the 2015 Paris Agreement.

4. Focus on a green economy not a grey economy

“It is very important that around the world young people, civil society and those that in the business community have understood that the green economy is the economy of the future and the grey economy has no future,” said Mr. Guterres. “It’s very important that you convince governments that they must act because there’s still a lot of resistance,” he told the youth gathered in the room.

“Nature does not negotiate,” he added. “It’s very good to see youth in the frontline.”

On 23 September, the UN chief is convening a Climate Change Summit to galvanize increased ambition for decisive climate action. 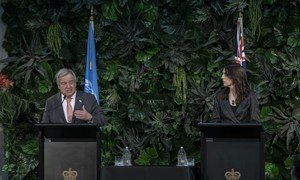 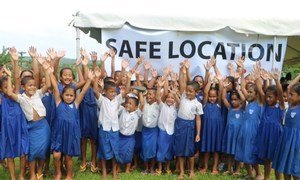 A seeming paradise, life on the Pacific islands is threatened by climate change and extreme weather, frustrated by remoteness and a lack of educational and economic opportunities. Secretary-General António Guterres begins a visit to the region this weekend, where he will speak to people living on some of the islands and see for himself how the UN is helping to mitigate some of the biggest issues.