“The Paris Agreement is a monumental triumph for people and our planet,” said Mr. Ban in a tweet, immediately following its adoption. “It sets the stage for progress in ending poverty, strengthening peace and ensuring a life of dignity and opportunity for all.”

Gaveling the Agreement with a green hammer, the French Foreign Minister and President of COP21, Laurent Fabius, announced the historic news – a moment greeted with loud applause and cheers, as the room stood up. Many delegates hugged, while others had tears in their eyes.

The Paris Agreement and the outcomes of COP21 cover all the crucial areas identified as essential for a landmark conclusion: mitigation – reducing emissions fast enough to achieve the temperature goal; a transparency system and global stock-take – accounting for climate action; adaptation – strengthening ability of countries to deal with climate impacts; loss and damage – strengthening ability to recover from climate impacts; and support – including finance, for nations to build clean, resilient futures.

“In the face of an unprecedented challenge, you have demonstrated unprecedented leadership,” the UN chief said taking the COP21 stage just minutes later. “You have worked collaboratively to achieve something that no one nation could achieve alone. This is a resounding success for multilateralism.” 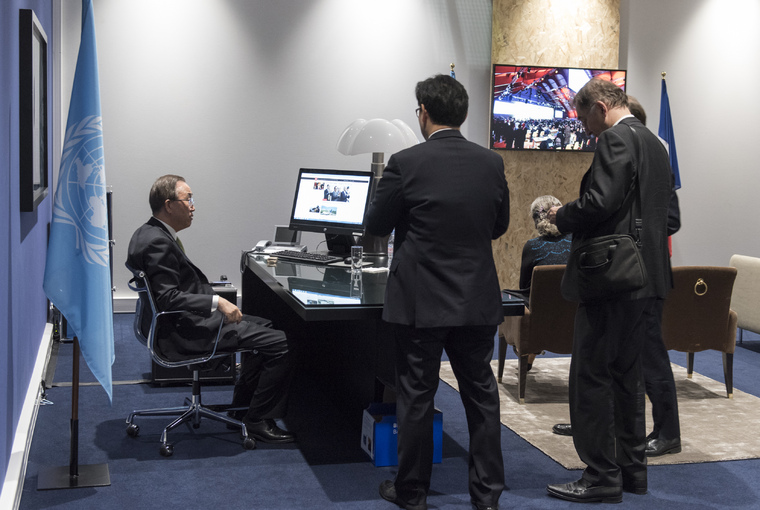 Secretary-General Ban Ki-moon follows the proceedings of the COP21 meeting from his office. UN Photo/Mark Garten 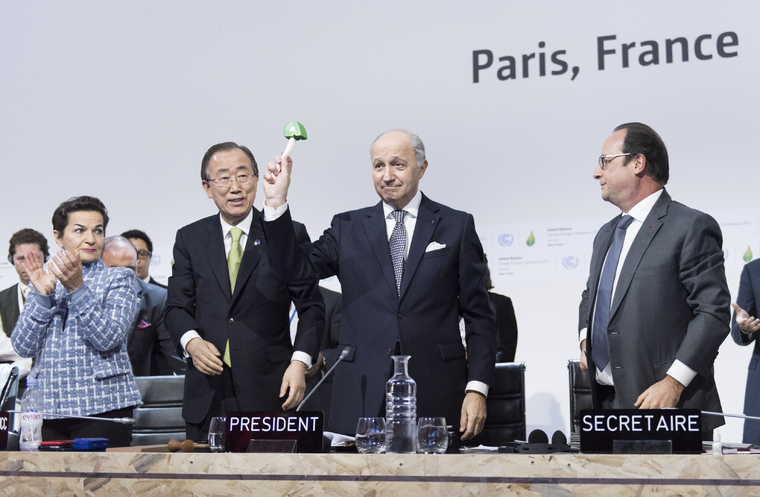 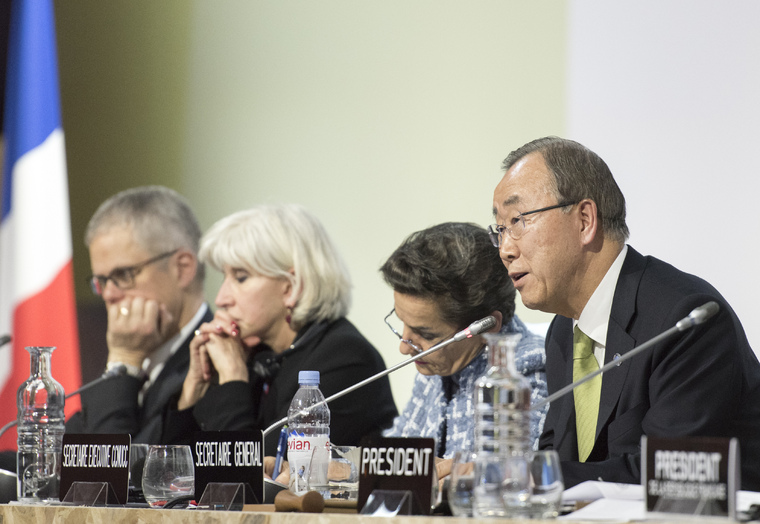 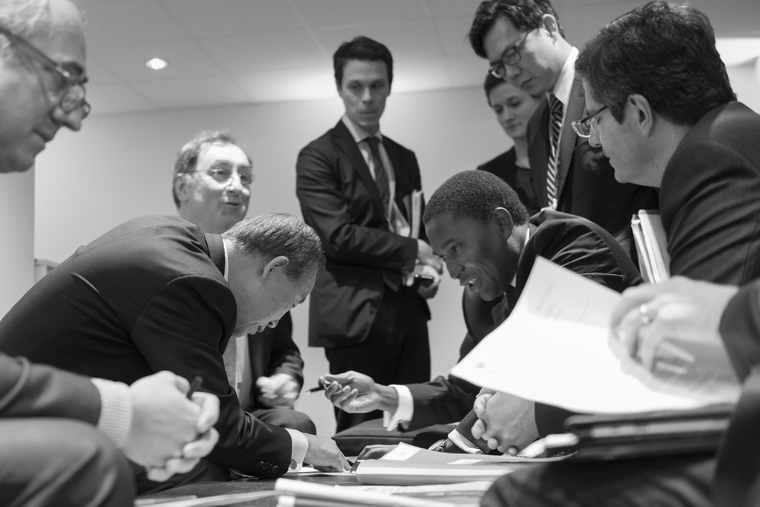 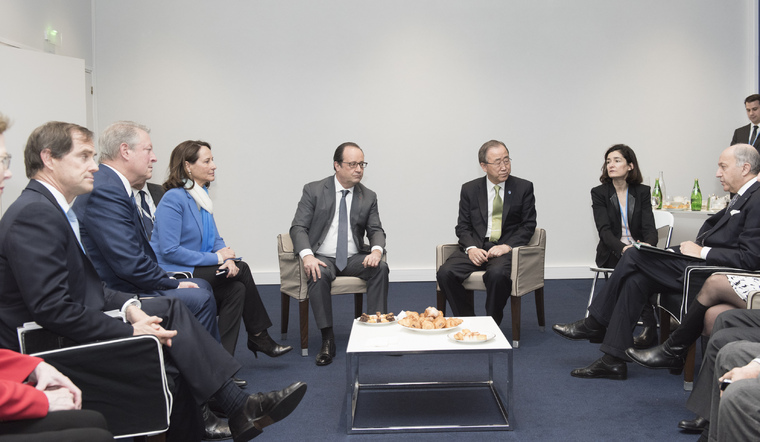 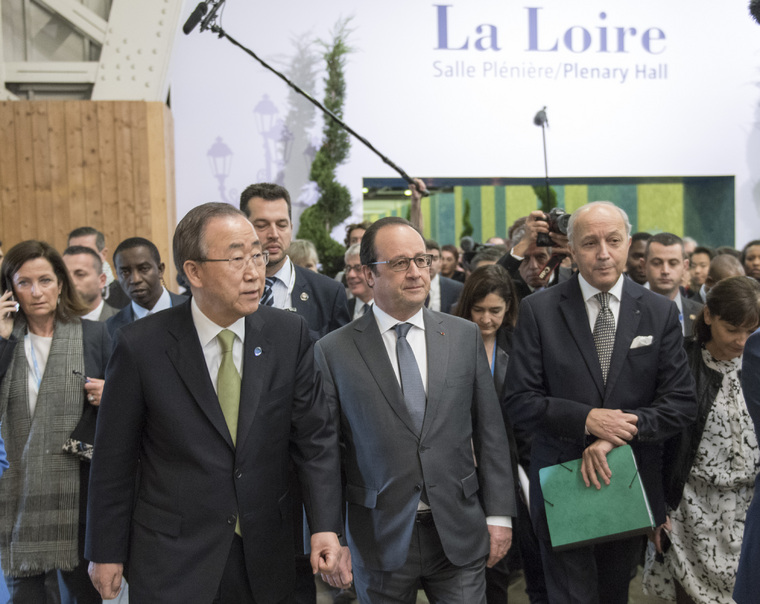 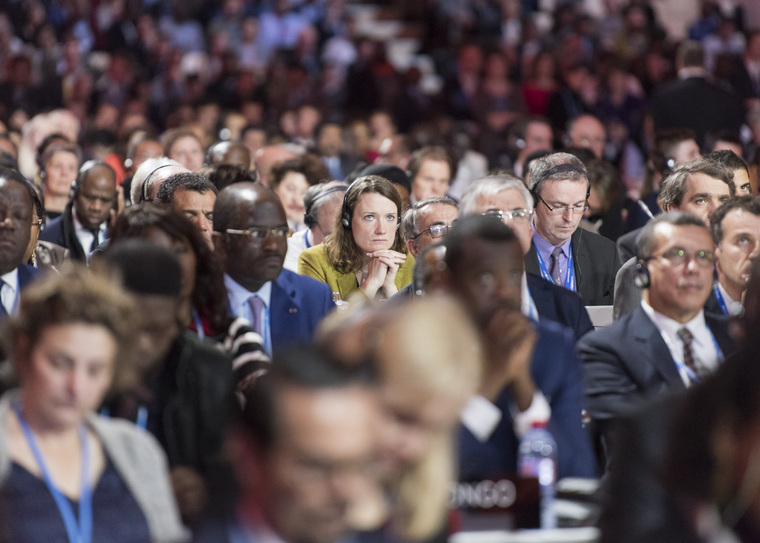 Recalling that he made climate change one of the defining priorities of his tenure as Secretary-General, Mr. Ban said that most of all, he has listened to people – the young, the poor and the vulnerable, including indigenous peoples, from every corner of the globe.

“They seek protection from the perils of a warming planet, and the opportunity to live in a safer, more bountiful world,” he underlined. “They have demanded that world leaders act to safeguard their well-being and that of generations to come.”

Turning to the agreement itself, the Secretary-General said negotiators reached “solid results on all key points,” with an agreement that demonstrates solidarity and “is ambitious, flexible, credible and durable.”

“All countries have agreed to hold global temperature rise to well below 2 degrees Celsius. And recognizing the risk of grave consequences, you have further agreed to pursue efforts to limit temperature increase to 1.5 degrees,” he announced.

In addition, a review mechanism has been established whereby every five years, beginning in 2018, Parties will regularly review what is needed in line with science.

“Governments have agreed to binding, robust, transparent rules of the road to ensure that all countries do what they have agreed across a range of issues,” Mr. Ban added.

Meanwhile, highlighting the role of the private sector, the UN chief said business leaders came to Paris in unprecedented numbers and that “powerful” climate solutions are already available while many more are to come.

“With these elements in place, markets now have the clear signal they need to unleash the full force of human ingenuity and scale up investments that will generate low-emissions, resilient growth,” he said, adding that “what was once unthinkable has now become unstoppable.”

“When historians look back on this day, they will say that global cooperation to secure a future safe from climate change took a dramatic new turn here in Paris,” Mr. Ban stated. “Today, we can look into the eyes of our children and grandchildren, and we can finally say, tell them that we have joined hands to bequeath a more habitable world to them and to future generations.”

Ending his remarks, the UN chief said that all Parties should be proud of the Paris Agreement and that “the work starts tomorrow.”

“For today, congratulations again on a job well done,” he concluded. “Let us work together, with renewed commitment, to make this a better world.”

Addressing the hundreds of delegates, Christiana Figueres, the Executive Secretary of UNFCCC, said “we did it in Paris.”

Several other top UN officials joined the Secretary-General in welcoming the new Agreement. This included the President of the UN General Assembly, Mr. Mogens Lykketoft.

“Today's agreement signals nothing less than a renaissance for humankind as we collectively embrace the global challenge of climate change and endeavor to transition to a more sustainable way of living that respects the needs of people and our planet,” Mr. Lykketoft said in a statement.

Echoing this message, the President of the UN Economic and Social Council (ECOSOC), Oh Joon, said the world has reached a key milestone in collective action for sustainable development.

“Bold action against climate change will contribute to poverty reduction. The United Nations Economic and Social Council will take part in follow-up efforts,” he added.

Earlier today, at a meeting of the Committee of Paris [Comité de Paris] – the body which is overseeing the negotiations at COP21 – the UN chief spoke alongside the President of France, François Hollande as well Minister Fabius.

“The end is in sight. Let us now finish the job. The whole world is watching. Billions of people are relying on your wisdom,” the Secretary-General had told delegates.

In an emotional address during which he held back tears, Laurent Fabius said the agreement “will serve meaningful causes, food safety and security, public health, the fight against poverty and for essential rights, and therefore peace.”

“People worldwide, our citizens, our children, wouldn't understand if we didn't adopt it and wouldn't forgive us,” he insisted.