António Guterres flew to Libya’s second city of Benghazi earlier in the day, in the hopes of helping avert military clashes between forces loyal to the internationally-recognized Government, and those loyal to Commander Khalifa Haftar, who leads the Libyan National Army (LNA), and controls much of the east of the fractured, oil-rich country, through a parallel administration.

I leave Libya with a heavy heart and deeply concerned. I still hope it is possible to avoid a bloody confrontation in and around Tripoli. The UN is committed to facilitating a political solution and, whatever happens, the UN is committed to supporting the Libyan people.

According to news reports, the Commander’s forces, have been pushing south and westwards in recent days, and had advanced to around 80 kilometres south of the capital by Thursday, reportedly skirmishing with forces allied to the Government. LNA-allied forces were also reportedly active to the west of the capital, attempting to close the road to Tunisia.

The UN chief met General Haftar in Benghazi in the middle of Friday, tweeting beforehand his forceful declaration that “there is no military solution for the Libyan crisis, only a political one.”

Following their meeting, the Secretary-General made brief remarks to waiting journalists, saying he was leaving Libya “with a deep concern and a heavy heart. I still hope it will be possible to avoid a bloody confrontation in and around Tripoli.”

On Friday afternoon, the UN Security Council was briefed behind closed doors in New York on the latest situation by the head of the UN Support Mission in Libya (UNSMIL), Ghassan Salamé, who is also Special Representative of the Secretary-General to the country.

Following those talks, Ambassador Christoph Heusgen, of Germany, Council President for the month, told reporters informally that the 15-member body’s members are “deeply concerned” at the military activity near Tripoli, “which risks Libyan stability” and threatens the UN-backed efforts to find a comprehensive solution to the crisis.

He said the Council called for LNA forces to halt military activities, and for an end to all such activities in the area. “The is no military solution,” said Ambassador Heusgen, adding that Council members stressed they planned to hold accountable those responsible for any further conflict.

“Council members reiterated their support for the Secretary-General and [Mr. Salamé] and called on all parties to pursue the path of dialogue and engage with the UN political process,” he said, adding that the Council also called for the safety and security of UN staff and reminded all parties of their obligations under international law.

On Thursday, the UN chief held meetings in the Libya capital, Tripoli, with senior Government politicians, to discuss the UN-backed Libyan National Conference due to take place later this year, following wide consultations across the country.

At a press conference, Mr. Guterres said a “Libyan-led and Libyan owned political solution” to resolve years of instability and insecurity there, was essential. It is hoped that the Conference on the fractured nation’s political future, could finally end years of turmoil following the removal from power, and death of former ruler Muammar Gaddafi, in 2011.

Libyans “have suffered too much and deserve to live in a normal country with normal political institutions, with peace, security and prosperity,” said Mr. Guterres, adding that “the UN has no agenda and no interests in relation to Libya but one: the welfare of the Libyan people, the peace in the country, and the possibility to live in a normal democracy and to take profit of the enormous wealth of the country to benefit its citizens.”

It is not through foreign intervention that we are going to solve the problems of any country”, he added, “and so it’s important that that principle also applies to Libya.

Following the movement of military convoys under the command of Mr. Haftar from the east towards the capital, reported early on Thursday, the UN chief made a “strong appeal” for de-escalation and an end to any deployments by any military factions inside Libya.

‘Shocked by level of suffering’ in detention centre

The UN chief also described how he had been “moved and shocked” after visiting a detention centre for refugees and migrants in Tripoli on Thursday: “(I was) shocked by the level of suffering, and especially by the level of despair that I found. This is, of course, not only a responsibility for Libya, it’s a responsibility for the whole of the international community”, he added. 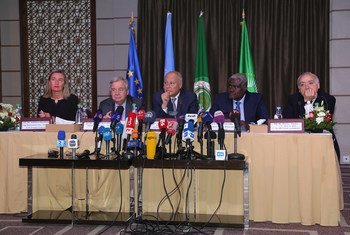 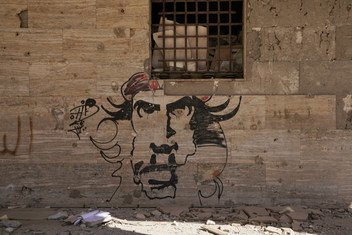